Ladies and gentlemen (the very few of you out there!), meet your new aging American Idol! 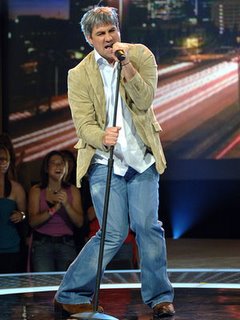 TAYLOR HICKS - American Idol 2006 (Season 5) Winner.
They made us wait until 9:59 to actually find out what we already knew was going to happen. And sure lots of drama filled the 1 hour and 59 minute void prior to that. Wolfgang Puck teaching Kellie Pickler about seafood, Chris Daughtry (mollyless) performing with Live. Katharine McPhee inexplicably singing with Meatloaf (well except Jim Steinman wrote that Celine Dion song as well as Meatloaf's Bat Out of Hell albums...which there will be a 3rd now?? yikes), lots of crazy celebrity/idol duets, Michael Sandecki (clay wannabe) being "stunned" by the actual Clay aiken, the Brokenote Cowboys coming for a performance, PRINCE showing up.... I could go on and on. But it was all just more unintentional comedy in the American Idol realm. And we've covered that all season!
Let's talk about what REALLY matters, Kevin Covais singing "What's up Pussy Cat" My God. I thought I had laughed in my life prior to tonight. Little did I know that I never even began to realize my laughing potential! Even Kellie Pickler couldn't take the song seriously! Ahh good times were had by all.
I think what the problem is, is that I'm speechless (there's always a first). I just feel there is nothing more to write about season 5 of Idol. Taylor Hicks is our American Idol. Already gave my speech about it yesterday. Will his awful single become a top seller? Sure it will. The big question is how will his first album do? Time will tell how our season 5 champ will do. I don't think it's necessarily a sure thing like Kelly and Carrie were. We can talk about it more when Season 6 starts if Taylor decides to lay down some tracks before then!
So with that, I bid farewell for now. Season 5 on a whole, didn't quite meet my expectations, but it was still a thrill of a ride. The blog, on the other hand has evolved over the past 2 years and is starting to take on a life of its own. Time will also tell if I will be as dedicated to lengthy write-ups next year! I think we all can agree that LESS Audition Blogs may be a good thing!
Enjoy the off-season! I know I will. Weeks and weeks of typing-free bliss! And perhaps a little concert during the summer being serenaded by our 1st Idol. (oh come on, I went last year....who would be THAT shocked if I forced some ladies to escort me to another one THIS summer? That's what I thought)
See you next January, until then may I conclude our Season 5 Recaps by unneccesarily quoting our reigning champ, "SOUL PATROL! SOUL PATROL! SOUL PATROL! SOUL PATROL! SOUL PATROL! SOUL PATROL! "
Posted by Mike V. at 11:47 PM

Ok... it almost the start of the next season. I have to say that I still can't stand Taylor Hicks. I was one of the only ones before... has my fan base grown???

Wow...I just realized someone posted a comment. Hey Laura, how's it going? You like the new layout? Nothing compared to the Lost one, but it's a start.

You can add me to your fan base. He has pretty much ended up exactly as I expected. Entertaining for the show....but just awful out in the real world.

That Runaround song is gag-worthy! lol And the rest of the album, I can't speak for....but the clips I've heard don't really help his case for me! But the dedicated Soul Patrol out there are digging his sound. And that's probably really all he needs to be mildly successful. Meanwhile...Daughtry's Album is on fire lol. The music industry is way oversaturated with Previous Idol Contestants these days. They're everywhere! But Kelly and Carrie are still remaining supreme!