American Idol: The Inevitable Has Happened!

"If you believe in yourself, dreams do come true." Inspirationally bland words coming from our latest castoff! And as usual, she repeated them in multiple settings. A speech at her high school, and in her SIGNOFF CLIP. Yep, I got 2 in a row! The season wasn't a total wash! But as I always said, it didn't matter if I get mini-predictions along the way correct. I predicted the final 2 quite some time ago as well as the one who shall WIN! Yeah, I'm getting ahead of myself yet again! None of this has been rocket science anyway, but sometimes I like to feed my ego! Let's slow things down and talk about tonight for a bit. Ladies and gentlemen the FINALE FACE-OFF is set. The Baby-Noise Impersonator turned Aspiring Broadway Diva has left the Idol stage in search of the Musical Stage. 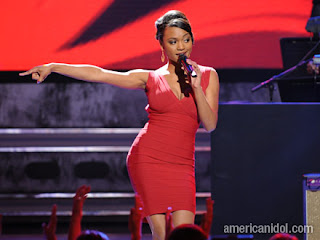 So it is to be Little David vs. Big David. Will the Archie-Boredom overtake Rocker David? Or will the Cook stir-fry the Artichoke? (You'd think I have been waiting all season to use that one but I really just came up with it now!) Well, you know my thoughts. I think Archa-crappa is a producer's dream of joining the Disney Tweener Cash Cow demographic. But the kid has had enough exposure to fulfill this wish. His lack of life-experience, his overbearing father, his forgetfulness of lyrics, his utter boredom must eventually come to end this dream of being the idol! And yes, when this happens, I will dig up comments from the Hollywood Rounds of me stating that he won't win! (when many others were under the spell of the lung paralysis drama and his amazing "child prodigy" pipes). And course, if the opposite happens I'll take it like a man! But look at my record kids! I'm 5 for 6! And I still demand a recount in the Clay /Ruben debacle. Sure, I'm not a fan of either, but Clay owned that season! I still think it was a conspiracy by the Idol producers to make the most profit from both of them! Oh well, it's all in the past. I have Kelly, Carrie, Taylor, Jordin and Craptasia all under my PICK'EM belt! (here I go with the ego thing again!) So let's go for 6 of 7! I still have one more blog to back out of my current prediction, but I really don't think I'll be changing my mind!

Yes yes...It will come down to 3 crazy songs. They will do 1 song each from their arsenal (I've already guessed that Archie will do "Imagine" which will be tough to beat, but Cook will probably do "Always Be My Baby" which was ALSO awesome.) They will each sing the IDOL Song. The question remains to if they will each get their OWN song to sing from the songwriter's competition. There definitely were some "ROCK"-ish songs in the mix that could suit Cook. And then there's bland crap that would suit the Artichoke. The 3rd song? Well, I always forget what they do with that one. I think it changes every year. But it's always that IDOL SONG that defines the winner. The question also is, if they both have to sing the same song...can they mess with the arrangement? Or does it have to be how the writer arranged it? IRONICALLY, I just received word that Blake Lewis is on the news and really upset about last year's finale because the producers would not let him remix the "CRAPPY IDOL SONG" he had to sing. hmmmmm
This does not cause me fear though because Cook has proven he can sing a song straight too. And Archuleta has proven time and time again that he has a hard time learning words to new songs! Oh well, no sense debating about it anymore. I'll leave that to our avid commenters to give their thoughts as well!

Well there you have it America. My awesome Results show blog. No need in congratulating me on my 2 in a row. Go ahead and congratulate me for being one eliminated contestant away from being 6 for 7 in Idol Winner Picks!!! The reason for the long results show blog? Well, chances are that the blog after next Wednesday's show won't be incredibly long. There's usually not much to say after the winner is declared! (well unless it's Archuleta, then be prepared for my wrath!!) So, I just wanted you all to have one nice gem of mindless ranting before we get down to business next Tuesday! With that said, there's not much left to say. So I'll see you next week for the Already Expected ALL David Finale!

I remember that episode of "Saved By the Bell"! I'm pretty sure the "AC" on the guitar is for David's brother who has cancer. His name is Adam Cook, so he has the same initials.

That Fantasia performance was a bizarre spectacle. Fantasia has a lot of personality, but her singing voice is not pleasant on the ears.

I think you'll be right about David Cook winning. Archie's got a hardcore fanbase, but Cook has more widespread appeal.

I can't see Cook doing "Always Be My Baby" again. There was something magical about that moment, and if he were to perform it again he'd have a tough challenge in trying to recapture that magic. I think "Billie Jean" will be the one he reprises. I agree with your choice of "Imagine" for Archie.

Adam Cook is the brother that is sick with cancer, not Andrew.

Alright alright...I only need to be told once! lol I never studied the Cook family tree or anything. But I did forget that we saw ANOTHER Cook brother in the audience one time.

But you never know...the AC could've been a duel tribute to the guy that got him on the show and in honor of his sick brother.

Thanks for the clarification!

Ian - good call on "Billie Jean" I forgot about that one. Not sure if you recall though, when Bo Bice did >"In a Dream" with no instruments and (questioning whether Carrie had it all in the bag.)...that was a special moment, yet he did perform it on the finale again. Same with Fantasia (ugh i hate to even say her name!) when she did "Summertime." (I am NOT putting a link here! LOL) The illiterate rasping singer was asked to sing it yet again the following night on results night. Some argue (ahem...Michael Slezak ew.com) that this was the most SPECIAL PERFORMACE ever on the Idol stage. When we all know it was Kelly Clarkson's >"Stuff Like That There!" lol

I was not an Idol watcher during the "Craptashia" era, and I am thankful for that. My whole family stared at the screen in utter disbelief at how horrible she looked and sounded. The one moment of relief was when they flashed to Simon's face - priceless.