Well, kids we've reached the end of yet another American Idol season. And boy did I strike some nerves with the last blog! For the first time ever, I received HATE MAIL! Naturally, it made no sense, but I still was excited that people cared enough to comment. Even using the old "It's just a TV show" saying, yet finding the effort to post a comment about said TV Show. Here's the thing kids. Me? I have a bit of an ego problem. And when I'm right about something, I tend to get a little excited and grin from ear to ear. Right now? Confidence is at about 123% (and counting!) Because after the ridiculous Judge's one-sided commentary on Tuesday night, things did seem a little suspicious right? Well, Simon must've done more than go back and re-watch the show. I think he saw the voting tally too! But his apology was still a good time! And, I think we've done enough bashing of one contestant for an entire season. This blog will be (mostly) dedicated to the winner. But we just need to get one little thing out of the way.

Here are some quotes throughout the season from yours truly about David Archuleta (codename: The Artichoke):

Ladies and gentlemen, vindication is SWEET! Our NEW.....AMERICAN IDOL!!!!!! 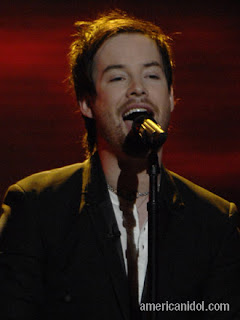 Well, I'm not gonna lie and say I wasn't worried that the judges didn't sway the vote last night. I already had the Blog Title set up for the other outcome: AMERICAN IDOL: Apocalypse Now! Ahhh as fun as that would've been, I still got to write it anyway! But a hearty congrats to David Archuleta for getting as far as he did. He made for quite a finale. And what a great way for Cook to win it all. Watching the entire finale, I just kept thinking of how good Cook actually became over the season. He always had the skills, but he seemed to fine tune them. Yeah, the haircut helped. But something happened THIS week with his performance of U2's "I Still Haven't Found What I'm looking For" where he went from "Yeah, this is the guy I think should win this year" to "Yep, this is my favorite male contestant that has been on Idol." And I'm actually looking forward to his album now! Of course, the devil in me is looking forward to Archie's album too. That's going to have some gems on it! (I forgot, we're done discussing him! I'm sorry! Bad habits you know?)

So anyway, it's been a crazy unpredictable season every week in figuring out who was going to go home. But we always had that inkling that we were working towards a Cook/Archie finale. And I'm happy I was able to string together 3 picks in a row! (the ones that mattered! But man those 8 straight misses were rough!) Definitely an interesting array of talent this year too. The Year of the "ARTIST" many have called it. Brooke and Castro bringing the folk side. Pianos and Guitars abound. Some people trying to learn harmonica. Better than season 3 and 6? Definitely! And you know what? Based on how they closed the season, I'm ranking it up there right under Season 4 and 1. That was some top notch stuff. Maybe this show has a few tricks up its sleeves yet!

David Cook has been added to my TiVo wishlist. I'm sure I'll be first in line to download "Time of My Life" regardless of how bad it is. Cook turned it into an Edwin McCain'ish bearable tune! And how about that? Paula was vindicated by saying "But that isn't the winning tune!" Tuesday night (regarding Cook's performance of "Dream Big")!

Okay okay, I'm rambling and I know everyone just wants to get to commenting and congratulating me! (or telling me how awful the blog is..... ::) That means my eyes are rolling Mr./Miss. Archie-Fan Anonymous!)

Let's continue the trend from this season's Results Show Blogs and look at some of the highlights of the finale:

It would've been cool if they could have attempted to get all of the Idols together this year to perform something like they did last year (minus Fantasia). But Miss Clarkson and Mr. Hicks were not present this year. Hicks is on Broadway doing GREASE and Kelly isn't promoting an album at the moment! But they went back to what worked in the Season 5 finale. Pairing up top 12 contestants with stars. Last season, the Top 12 were almost non-existant. Of course, that may have been because they were awful!

Whew...well there's not much to say. I don't remember being this nervous for a Results Show since Season 4 (when the winner seemed so clear to me!) and even Season 1 (same thing). Yes, it's a TV show, but the momentum built within this blog (see above quotes and read past blogs of Archie-Wonder!) put a lot on the line for yours truly! I'm sure "MOST" of you knew it was all in good fun. There's always a contestant that gets the brunt of my jokes every season (anyone remember Lakithsha last season? Hell, even Elliott Yamin got the Mr. Tumnus Label in season 5 and I liked him!). Archie was a good kid. Maybe a little TOO good (and they thought that was Brooke! ha!), but good nonetheless. He has his whole life in front of him and a large audience to support him. But when we look back at season 7, we will remember it as the year of Unique versions of "Always Be My Baby," "Billie Jean," and "Hello." We will remember how he wowed us with "Music of the Night" and with "The First Time I Ever Saw Your Face." We will remember it as the year of David Cook.

CONGRATULATIONS DAVID COOK! You Done Well, you earned the title. My farewell advice to you is the following: KEEP YOUR HAIR SHORT!

Until Next Year folks. Where I will once again state that I may cut down on Auditions and even lengthy blogs. But we all know me too well! Hope you enjoyed my season-long ramblings and I hope you all come back next season! See you then!

You've been by Cook's side all season long and unlike some other bandwagoners, you stayed true to your heart. Good for you.

It'll be good for Cook too (and yes, even Archie), if they also stay true to their respective hearts and bring us years of great musical enjoyment.

Congrats to all you Cook fans. Well deserved.

Mike, congratulations on picking the winner correctly. I didn't have the courage to predict Cook as the winner after all the pimping Archie got, but you stuck with your gut and earned the right to gloat. In my defense, everyone at work today was saying they thought Archie was going to win too, so I wasn't alone.

I felt good about Cook's chances after looking at DialIdol (which I try to check after I make my predictions so that they're honest), but my on-the-record prediction was for Archuleta, so I have to admit I was wrong.

Congrats on seeing your guy win, predicting it correctly after that finale and the upcoming wedding!

Mike, I don't think you expounded enough on the hotness of Carrie Underwood last night. Really. I mean...damn. HOT.

Thanks Steve and Ian. It was tough not to waiver from sticking with Cook a couple times, but he always just felt like the deserved winner! And clearly, most of American thought so as well. (btw..already downloaded his new single and the U2 performance. I'm such a dork!)

As for dialidol, yeah I used to put disclaimers in the blogs back in the day that I didn't look at it until making my picks. lol I still hold true to that strategy. Of course, it wouldn't matter if I did look sometimes, because I never believe it anyway! (only when it supports my cause! lol)

As for getting detailed on Carrie in the blog, even though my fiance' has given me permission to recognize Carrie's looks, I still tend to remain neutral on the topic! lol Plus, she deserves attention for her amazing vocal talent anyway!

Mike, Thanks for entertaining me through another season of American Idol. It's been fun! I hope next season we disagree...it's more fun that way.
I guess I need to go download some David Cook!! Yippee!

Ok, enough boosting his ego! Some of us have to live with him! ;-)

I can't wait to see who the next runner-up will be to perform "Don't Let the Sun Go Down!"

As for Carrie, I sometimes think we need a new word just to descibe her hotness. Last night wasn't as hot as Sunday on the ACMAs, but it was close!

I say keep boosting my Ego! I went through a season of torment for my supporting Cook over Archie! I need some LOVE! lol

And is "YUM YUM" the first nomination for Shanna's
"new word for hotness" request? LOL

I don't think I could get by saying that one without getting slapped in the face!

I wouldn't suggest that you try it! Lol