American Idol: So Much for My Perfect Streak!

I really don't have much to say tonight kids. Just one little tiny thing: 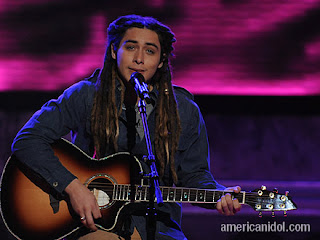 I was really hoping to go the whole season not picking something correctly, but you know as the numbers got smaller, the odds got better! Jason has had it coming for a couple weeks now. And he really seemed to have given up. Even with his dialogue with Ryan tonight, it just seemed like he didn't care and he really just wanted someone to pass him a joint. I guess after awhile, these people that you think are cool, just turn out to be irritating! Sure, but let's remember Castro for the weeks that he brought us Hallelujah, I Don't Wanna Cry, Somewhere Over the Rainbow and made us realize you don't have to be the best singer on Idol to wow us on a given week. Farewell Castro, go back to where your brain doesn't have to work!

So Syesha, one we thought would be eliminated several times, has survived to the Top 3. Crazy stuff. Does she pose a threat to the all David finale? Probably not, but it would be pretty crazy if she pushed one of the favorites aside! We're just 2 weeks away from the Kodak theater grand finale. Next week the trio will hit their hometowns to a grand welcome from random people they never met!

What else was weird tonight?

Saying any more about this show would be just milking things! (I think I already did that!) Go ahead and congratulate me for finally getting one right! Yeah, not too impressive with a final 4. It will be more impressive when Cook wins after supporting him basically since the audition! See you next week!

Congrats on finally picking the elimination right. It had to happen sooner or later. I think the rest of this season will go predictably. Since you're a David Cook fan I'm sure you'll be happy when he wins.

Speaking of awkward...How about those great skin-tight, bright-colored, spandex bullfighter pants the guys had to wear in the Ford commercial!!!

Way to go on the elimination pick Blogger-Mike!
Speaking even more of awkward - what was with Syesha mixing politics and entertainment. It was not cool how she brought up the next woman or black president right in the middle of ANOTHER attempt at explaining her song choice! Let's keep it a singing contest and not a venue to forward someone's political views!