Hello America!  Well, after that hour we spent in Los Angeles, I can say that I did get a few laughs, but was left a little unimpressed by the amount of talent that we were shown.   We saw 5 of 22 that got sent through to Hollywood.  That's quite a rough ratio.  But we did get to see the evil side of our 2 guest judges.  Day 1 brought us Avril Lavigne who promised to go easy on the contestants.  I guess her hoodie with devil horns convinced her otherwise?   And, well, I didn't expect any less from day 2's guest judge Katy Perry.  But, I loved that she had it out for Kara the whole time!

But we did get a little insight on some of our golden ticket handlers.  So let's take a deeper dive into what we saw:

Hollywood Bound
Let's pause to have Katy Perry throw her coke in Kara DioGuardi's face!!   I am so glad that someone else gets annoyed by Kara!  Who else is with me? 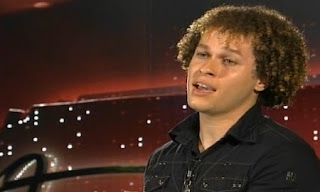 The Bad Ones
Well, who should I pick out of all of the wannabe's we saw?   First of all, one more Kara bashing by Katy Perry.  "You shouldn't send someone to Hollywood because you feel bad for them!"  Couldn't have said it better myself.  Kara seems to recruit Randy to her cause way too much this season and the guest judge usually goes along with them.  I'm glad Katy stood her ground!  Granted, we didn't see those contestants perform, but eh who cares?   The bad ones - There was Neil Goldstein with the high IQ and sweaty face.  Loved when he sang Meatloaf and the lyric "Remember everything that I told you" and then forgot the rest of the song!  Simon's "That's ironic" had me rolling!  You had your screecher in Jayson Wilson's "All By Myself" performance.   The unemployed Jesse Chang did some "Kung Fu Fighting" and some great arm motions with his "HUH" grunts!  There was the Mick Jagger dancing machine in Austin Fullmer (what was up with that sit on the floor and clap dance?!)   But the following 3 are the ones I'll highlight.
So, that's it from L.A. folks!  Were you impressed by any of the talent we saw?  Tomorrow we head down to Dallas, Texas and will be joined by the continually AWESOME Neil Patrick Harris and the....um JOE JONAS?  Really?!!?!   I guess we'll have a very teenage friendly episode on Wednesday because we know viewership will be up!

Ending Credits
Follow me on Twitter for updates: @LOSTAddictsBlog (yes, it's mainly about LOST, but I will post when these blogs are up)
Please Click to Support! - I'm moonlighting at Gather.com and writing some entertainment articles, including re-posting these blog entries.  Every page hit gets me closer to a teeny tiny donation for my efforts.  If you enjoyed my writings, please click here to register a page view.     And also check out my other writings at http://mvitullo.gather.com/

Check out my other Blogs:
LOST - http://www.lostaddictsblog.com/ (14 days until the premiere!)

There were two Cheap Trick references in this episode! That Austin guy sang "Surrender," then they showed a medley of rejects set to "I Want You to Want Me." Despite that, it was kind of boring. Tasha Layton was the only person I really liked of the ones who got through.

Did love the Cheap Trick references! Yeah, if I didn't write it all down, I wouldn't have remembered much from the episode except the bad stuff! lol I'm just about ready to move to the next round!

I really like Andrew Garcia. I'll admit the back story was strange and unnecessary. Idol needs to stop forcing stories out of everyone.