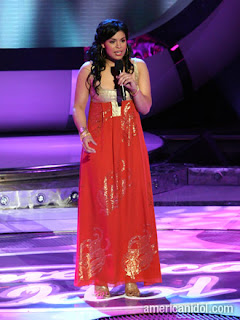 Hope anyone with a TIVO/DVR recorded past the 2 hour mark because the announcement of our big winner took the backseat to the long awaited BEATLES MONTAGE that filled in the final 10 minutes of the regularly scheduled airtime. Yes, Jordin Sparks won American Idol, but tonight was a night that seemed to celebrate the achievements of our PAST winners, primarily Kelly Clarkson and Carrie Underwood. And of course, Clive Davis made it very clear that Chris Daughtry is outselling and overachieving Taylor Hicks. Hicks put on a good show with his new single "Heaven Knows" though. Maybe the publicity of the Idol Audience will help him out a bit. But still, there were only a few numbers that featured our Top 12, and one of the ONLY top 12 contestant to be showcased by themselves? Inexplicably...SANJAYA. Of course even HE was accompanied by Joe Perry of Aerosmith...and predictably...the crying girl (who continues to cry away). 2 Hours of performances. My personal highlights from the night?

Things I could've done without:

There were tons of other performances including showcases for Melinda and Jordin. Green Day and Gwen Stefani filled in some time. Paula got pretty much NO airtime, but if you caught her on the Red Carpet before the show, you might've seen why. She must've been on so many pain killers, that it almost rendered her unable to walk (I would say Talk also, but she can barely do that as it is anyway!). But she still found a way to dance in place for the entire 2 hours! By the way, Simon stated during the red carpet that he will definitely be done on the show after 3 more seasons (ugh..can you imagine still watching this show 3 years from now?). Should be interesting to see if they pull the plug on the show then or keep it going.

Well, that's it for the year folks. CONGRATULATIONS JORDIN! I'm glad I picked the right one to follow this year, ONCE AGAIN! Hope everyone enjoyed reading as much as I enjoyed writing! It was a rough season and I can't make any promises about my investment in the show next year. But knowing me, I'll find a way to write SOMETHING! Have a great "Off-Season" and see you next year for season 7!
Posted by Mike V. at 8:03 PM