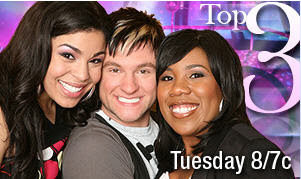 Well, I think I kinda figured I'd find myself in a conundrum after our final 3 performed this season. In a season lacking a clear star, there have been 3 contestants that have been really soaking up the compliments on any given week. Those 3 people? Yep, Jordin, Blake, and Melinda. Jordin - The Marketable Idol, Blake - The HIP/Hoppity/Beatboxin Idol, Melinda - The "hasn't sung a bad note all season" Idol And as the weeks have gone by us readers of the Idol Addicts Blog (tough to say that word "addicts" this year with such a painful season!), have been split amongst these 3 people. Plenty of "Blaker" Girls roaming the comments section of the blog. We have some secret Doolittlers amongst us too, so I've learned! And then there are us realists. Those behind Jordin! (obviously I kid folks! Especially after tonight!) When the top 12 started, we thought it was going to come down to Melinda and Lakithsha and began to saw the hint of a Jordin threat to Lakisha. We watched Lakithsha deteriorate in front of our very eyes. I think when Chiths ThSligh left the competition, her mutant LISP powers were able to absorb his to make her the ultimate speech challenged contestant! Yes yes, I really was looking for an excuse to mention the lisp at LEAST one more time! Anyway...my point is...it then became a 2-way race between Melinda and Jordin. Blake was always the best of the guys but his voice just didn't seem to meet theirs. Then came Bon Jovi night a couple weeks ago....and he found himself a whole lot of new fans. Why? Well, it's two-fold. 1.) Chris and Phil went home....and all the teenage girls needed a new man to vote for 2.) People saw hints of greatness from Blake back in the auditions and in the semi-finals, but then saw him turn into a glob of gooey cheese in the top 12. BonJovi night restored some faith as he brought the beat box back in such a stunning way. 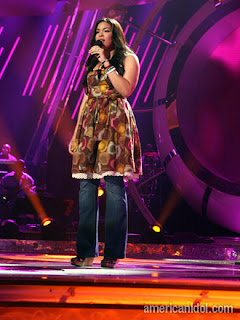 Simon's Pick: "Wishing on a Star" - Rose Royce
Producers's Pick: "She Works Hard for the Money" - Donna Summer
Jordin's Pick: "I Who Have Nothing" - Shirley Bassey

Well, I am not going to pretend to say I can understand ANY of the songs PICKED for Jordin tonight, with exception to her personal pick "I Who Have Nothing." That was, in fact, the song when I declared this competition was Jordin's to lose. Simon was in a bit of a crazy mood tonight, bashing the arrangements of his and the producer's picks calling them too Old Fashioned. And of course, he called Jordin's song TOO old for a 17 year old. Which, I have to agree with Jordin....Simon PICKED an old song for her! And seriously, who really rocks out to Rose Royce on their Ipods? And then, as my top Blog advisor mentioned to me, they had a 17 year old singing about a Prostitute working hard for her money! This had to be the inspiration for the laughter behind the judges table when Paula said "Jordin, you worked hard for your money tonight!" Well, that, and it was TOO inevitable that Paula would say something cheesy like that! Besides all of the lousy song choices, I gotta say Jordin did GREAT with her performances and showing off her style. As stated before, she LOOKS the part. And she has that edge over the other female singer in this competition. Plus, she's got a kickin Voice. But those songs???? ugh.....I don't know. If we had to judge based on just tonight, those songs would not help her. Good Luck Jordin! Overall, thumbs up tonight especially with your handicaps in the song choice genre.

Speaking of the judges though, I have to have a little sidebar here. Tell me I'm not the only one waiting with baited breath for VH1 or E! to do a "Behind the Music" or "True Hollywood Story" behind American Idol and the Trio of Judges and Mr. Seacrest himself? I mean did you see how giddy they all were tonight with their inside jokes, uncontrollable laughing, eyerolling and Drunkenness accusations? Can't you see it now? "BEHIND IDOL: The Drugs, The Alcohol, The Downfall, The Redemption!" Obviously, if Idol never really takes a nosedive in the ratings....the tragedy of the story (as all of those crazy documentaries has a real Tragic moment, before the "hope for the future" moment) would have to be the Corey Clark scandal that arose in season 4 that tied perfectly with Paula being absolutely intoxicated every week on the show (now it's just every other week). Oh, I'm telling you kids, it's inevitable! It's coming! And I can't wait!

Now back to the show! 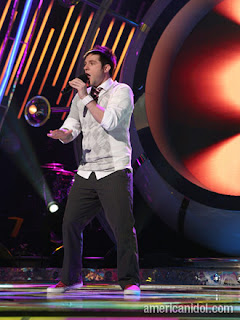 Paula's Pick: "Roxanne" - The Police
Producer's Pick: "This Love" - Maroon 5
Blake's Pick: "When I Get You Alone" -Robin Thicke

Well, what did tonight prove to us about Blake? Well, pretty much what we all figured. If you put someone else in charge of his music, he really has a chance at being a star in the music industry. I always thought Sting or the Police would suit Blake pretty well (as I kinda thought he adopted some of Sting's mannerisms) but "Roxanne," Paula??? really? I had constant "Lost"-like flashbacks of trading swigs of "water" (yeah, my family is reading!) with my friends on the "Roxanne's" and "Red Lights" during the whole song! Now, while the drinking game has forever ruined the song....Blake still sounded very good on it. We can attribute this partially to the special Idol Sound Effects department (again, nice Echo-effect guys! I really thought Blake was doing that naturally!). But Blake still did his own thing...and even unleashed his inner rocker accidentally with letting the Microphone fly off of the stage at the end of the performance. Blake's weakness? Those cheesy dance moves! Gotta love them though! But come on....you all were rocking with me on his Maroon 5 performance. That was spectacular. And I have to agree with Randy....that's what he should be doing. And the beat boxing on this song was subtle enough that it didn't take away from the song, but just added a nice BLAKE'ness to it. Loved it. The Robin Thicke song, though? I don't know. All I could think about was when this dude actually showed up at a results show singing like a pre-teen girl. I guess there are lots of Thicke fans out there...but I didn't get this choice at all. Sure, it shows off BLAKE's Hipster vibe. But I don't really think this is where his fans are. It's just where Blake WANTS his fans to be.

I think I have read an interview that Blake would prefer to LOSE This competition so he could have Chris Daughtry-like success and make his own kind of album. If that's the case, then maybe his final song choice was a strategic move at doing just that. But, song 1 and 2 may have guaranteed him a spot in that final 2. Really tough call. But Thumbs Up overall on Blake tonight.

Final note on Blake. Yes, you were not seeing things. Blake was definitely rocking it out with Sir Mix-A-Lot in the fabulous state of Washington. crazy.... 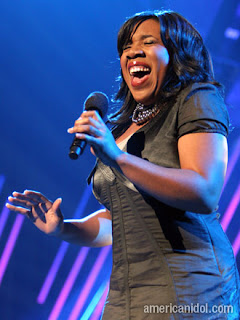 Ahhhh Melinda. We've been through a lot together, haven't we? You and me, we've said some things. Some really nice things AND some really mean things. And you know what? I've meant every word of them! We've said it every week. (I think I've even said "we've said it every week" every week!) This girl can SING! We all know the story. The humble background singer gone pro. Simon said it himself, she has been consistently singing well throughout the whole competition. And if this competition was based purely on vocals, Melinda would have this thing in the bag. Unfortunately, for Miss Doolittle, she has a bit of an image problem. There have been drastic improvements throughout the competition as I've noted. But she still has certain tendencies when she sings that make me cringe every time she does them. And I really wanted her to unleash some fury on the songs....like the Tina song and even "I'm a Woman" And it really looks like she tried.....but does it look to anyone else that her emotional gestures during her performances just don't come naturally? They all seem forced to me....which is where I think Jordin wins out. Hey...maybe it's just the fact that when Jordin hits the big notes, she DOESN'T unleash the monster teeth, shrug her shoulders (shielding the sun from her neck) and look like she's fighting some nasty case of the constipations. So Maybe she just looks better by comparison in that aspect? I really can't place my finger on it. But man...did Melinda produce the CHILL factor for anyone else during her rendition of the Whitney tune? I know you all think I can't stand the girl. And that I probably bust on her appearance too much. The appearance you can get past....IF the performances are THAT memorable. And hers really just haven't been THAT memorable for me. I've just wanted her to come out of her shell every week, but she never has. And that makes it hard for me to root for her. So, personally, I still think Jordin should win this thing! And she may go home this week. But it's a matter of personal preference! Don't worry, though, even if I'm not a fan....the judges are rooting for Melinda to make the finals...which means she probably will!

Well, I've tried this philosophy before and it worked, so I'm going to stick with it. Everyone did well tonight. We have a natural ranking of talent of our remaining 3 contestants. And only ONE of these contestants has been in the bottom 3 AND the bottom 2. Randy said it's going to be a Female vs Female finale. Paula said for the first time, she is not going to make a decision (oh I'm laughing so hard right now! First time????). Simon just said Melinda will be there. What does Mike say?

Safe: Melinda Bottom 2: Jordin, Blake
Elimination Pick: Blake Lewis - I like you dude. Maybe too much beatboxing on certain weeks, but you're a pretty cool nerd. But this season is all about the DIVAS. Beat-box your exit cue dude!
It's just my pick. I would not be surprised for ANY possible pairing out of these 3 for the final 2. But I just wasn't ready to say goodbye to Jordin! And I'm thinking some other people are not either!

I know some of you have some things to say to me. Don't be bashful....defend your contestants! Who do you think is going home? I've laid my picks on the table. Why don't you share? Hope you enjoyed! See you tomorrow night!
Posted by Mike V. at 6:44 PM

Blake will land on his feet: still would like to see Jordin pull it off though!

i dislike your gal jordin

oh and blake gets on my damn nerves

but i only started watching this season about a month ago

but melinda is awesome every week. and if you can nail a whitney song, then you deserve to win.
sincerely, sally

Thank you for letting us post about our favorite singer. Without this site, it would be really difficult to share the latest news about them.

FREE SONG FROM AMERICAN IDOL'S MELINDA DOOLITTLE! GO TO www.melindadoolittle.com and get it NOW - FREE! New album released on February 3, 2009! Don't miss it!

Keep updated about Melinda's career at http://www.melindasbackups.com which is a web site owned by Melinda Doolittle. Melinda’s Backups™ is a non-profit supportive association inspired by Melinda and authorized by her to operate this web site on behalf of her fans.