Well, I didn't predict it, but you can't really consider it much of a shocker can you? I mean, after all that was revealed about his "revealing" (no pun intended) past? Seems like the powers at be let him have a week grace period before the fallout began. Granted, last week was a decent performance, this week was a trainwreck. But was it AS trainwreckish as Kristy Lee Cook, Syesha Mercado or Ramiele Mulaby (still haven't learned how to spell that right!)? Perhaps those SUPPORTING his cause only stuck with him if he was singing well and the backed off in huge numbers once he failed to deliver? Or the Executive Producers possibly wanted him off the show before the top 10 so that he wouldn't be able to influence kids across America on the IDOL tour! "Do anything you have to do to make a buck kids!!!" (of course maybe he would've said multiple one dollar bills instead of "buck"!!!) Yes my friends, our buddy STRIPPERELLA has left the building: 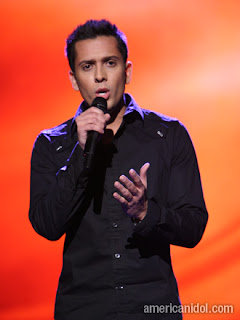 Well Dialidol is looking useless again this year pretty much saying EVERYONE has a shot at the bottom 3 except Mr. Artichoke. And yeah...I went out on a limb with Ramiele, but I guess all of Danny Noriega's support went her way because they are BFF!!!! ("I know we met merely months ago but we are soulmates...and I know Danny that you'll never feel about me the way I feel about you but we are soooooo MFEO!!!! Please sit with my parents and wear my t-shirt to support me!!!!")
(BFF = Best Friends Forever, MFEO = Meant For Each Other! Come on guys get with the program!!)

So next week we're getting more Lennon/McCartney Songbook eh? Well I sure hope they have more than 13 other songs to choose from (remember they only had 25 this past week for the 12 of them). My guess is AI got access to the entire songbook but made decisions on what songs were available to be sung this past week. So they'll have another round of songs to be chosen next week. I love the Beatles and all, but I think America will eventually want to hear something else. I mean, as impressed as I was with David Cook this week, do we really want to hear him take another peculiar Beatles song and make it an alternative hit? Do we want to see David Archuleta struggle again? Okay, well maybe I DO want another week of Beatles!

So who should we be targeting for elimination from now on? Let's face it...there are the REAL players, the maybe pretenders, and then a few space fillers. I am going to focus on the SPACE FILLERS as these are the people we won't feel bad about eventually leaving us:

Everyone else seems be fan favorites and it could come down to how they perform on a weekly basis. I am standing firm on my opinion of the Archiemeister. He is no longer invincible and has to answer to some major talent in this competition. Keep in mind that Melinda Doolittle was the favorite to win all of last season until she surprisingly got booted from the Top 3 (and need I remind you that I picked Jordin Sparks during the Top 12 Performance Blog!) Anyways, enough of my blabbing on and on.

Sure there's tons more to talk about: Season 5 runner-up Katharine McPhee trying to upstage Season 5 winner Taylor Hick's performance of "SOMETHING" (didn't even come close), Jim Carrey being all over the show with self-admitting shameless plugging, Idol taking phone calls, more Ryan/Simon banter....but I'm getting the feeling you're tired of me rambling! Look on the bright side! Idol Results shows don't conflict with LOST now so you get more of my wonderful thoughts! BE HONORED! And with that, I'll catch up with you guys next week when we break down the TOP 11!

I watched the result show in a record 4 minutes this morning between Clifford and Super Why.
My favorite is Brooke.

I've always believed that the results have been tainted from time to time depending upon the producers wishes and whatnot.

Hernandez certainly wasn't going to be taken out on the tour with his history and last week they bounced pretty boy before he could contaminate America even further.

This week, no matter what, I think Ramiele is gone. Just because of her professed love for pretty boy and her oh-so-dull performances of late.

Keep up the good work with the blogs. I've enjoyed them.