American Idol: And the Streak Goes On

Well well well....this has become quite a phenomenon of its own hasn't it? A storyline more intriguing than the almost inevitable David/David finale. Of course, considering if I'm predicting an all David show in the final week of Idol this season, then chances are it's going to be 2 other people in that finale! Because yes ladies and gentlemen, while we can all agree I write fabulous, entertaining, and LAUGH OUT LOUD blogs I have YET to pick the right eliminated top 12 contestant this season! Sometimes it was reverse psychology, and other times the person getting kicked off goes against every mathematical possibility in existence! But other times, it just comes down to popularity and sympathy. And sometimes I forget to include THAT in the big picture. Well, with that said we can now officially state that all FOREIGNERS have officially been eliminated from AMERICAN IDOL! 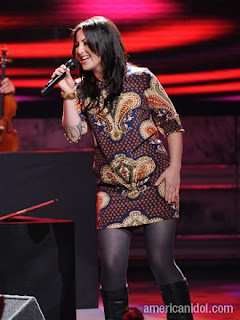 Crazy, just crazy! Granted, I did have that irksome vibe when listening to Carly's performance last night. The screeching was unbearable. I thought she was a little better with tonight's performance. Syesha, well....while she was good (and much worse tonight), she just doesn't have the fanbase. I should've stuck with my thoughts that she is on deck for elimination. I can't imagine Neil Diamond week will favor her too much either (more on Neil in a bit!). But you all can let me know who you want to be safe next week and I'll pick them to be eliminated! Clearly it works! Brooke and Jason are clearly fan favorites in this competition even though they don't stand up to the vocal skills of the Davids. A nice shocker for me would be if Castro or White could somehow upstage Archuleta to the Kodak theater! And while that would probably seal a victory for David Cook, it would be worth it to see that smiling kid turn to tears in front of America. Of course, he'd probably be THAT GUY that cries but can't get that stupid grin off his face!

And yeah, when he was explaining his stance on the song choice last night I couldn't help but think that he has pretty much the same speaking ability as Paula Abdul. Speaking of reality shows, couldn't we just put those 2 in a house with a couple cameras and listen to the conversations they have? Now THAT would be a show! (please, no Corey Clark references! It's totally not where I was going with this!)

Anyway, NEIL DIAMOND next week! Neil was yet another Saturday Morning Staple around Casa Vitullo. Probably one of the first concerts I was ever taken too as well. What was I 4 or something??? Oh yes, the brainwashing happened early on! I wonder how many of Neil's tunes they'll get to choose from because there are a ton. And since David Cook likes to avoid being predictable, will that mean he'll fight the urge to do "Girl, You'll be a Woman Soon" since this was redone for the Pulp Fiction Soundtrack? And does this mean that David Archuleta will take some of Neil's cheesy 80's tunes that I couldn't help but love back in the day like Turn on your"Heartlight" or "Heading for the Future?" Oh please do Davey! Personally, I think Cook will be smart enough to avoid that comparison and will kick it old school Neil with us. And we can only hope that "Sweet Caroline" will be saved for the Results show Group performance to spare us from any of these contestants trying to get the crowd to sing along! "SO GOOD! SO GOOD!!!"

Well, I could have rambled on there forever! What else is worth noting from tonight's show?

Whew...Okay, I've rambled on enough. I apologize once again for not picking the right person to get kicked off the show! But you are all welcome for sparing Brooke. I don't think any of us really wanted to see her go just yet! Let's hope Syesha turns in a snoozer next week. If that's the case, there will be no saving her! (so I say!!) See you all next week on your boats and on your planes as we'll be coming to AMERICA('n Idol!!! - yep blatant Neil reference)

I like the Neil Diamond songs that get played on the oldies stations, but other than that I don't know his stuff that well. Still, I'm sure I'll enjoy next week a lot more than the other mentor weeks we've had.

Please keep picking Brooke to go home, at least until Syesha is gone. I know Brooke has little chance of winning at this point, but if she can be the last girl standing that's almost as good to me.

Too much was said about it being AMERICAN Idol so Carly getting the boot didn't really surprise me. I second Ian's motion, though...keep getting Brooke to go off, as I wouldn't mind her being the last female either.As far as Neil Diamond week goes, well, I am getting ready to be entertained because somehow, thinking the Artichoke would sing anything BUT Heartlight, well, I just can't fathom it...lol