American Idol: The Blunder from Down Under

Well, I can honestly say for the first time in a long time that I am absolutely SHOCKED by the results show. I think anyone that even may have pegged a bottom 3 appearance for this guy wouldn't have thought he'd be going home so early in the competition. ESPECIALLY, not after his amazing performance last week that was solidifying him has a potential top 2 finalist. Ladies and Gentlemen, this is a shocker of all shockers. Our Australian American is going home: 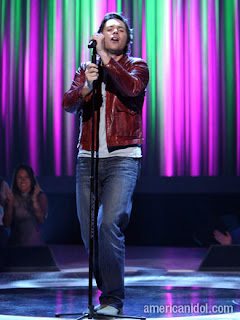 I am totally speechless. I mean, even Carly, with her bad performance would've been kinda a shocker. BUT Michael Johns??? Seriously? What's the lesson here? Well, don't go first! And if you're going to go first, better make it memorable or at least be David Archuleta! Okay, "Dream On" was not the best song to sing, but he wasn't AWFUL! The screaming at the end? Yeah, overkill. I guess on a night of unimpressive performances it was anyone's guess who was going home. So much for a D. Cook/Michael Johns finale. Guess we have to make room for that crazy Artichoke again who was afraid to play the piano in front of 30 million people! (yeah...good excuse for barely playing it!!)

Good call anyone who said Kristy wouldn't be in the bottom 3. I still thought she deserved to be there. In no way do I think she is a MASTER STRATEGIST. She's just finally singing the songs people expected her to sing from the beginning. And after seeing Carrie Underwood Wednesday night, go back and watch Kristy's performance of "Anyway." See the difference? Yep, I thought so too. So Syesha and Kristy should still be on deck as the next to go. But any faltering by Jason or Brooke could see them in the hot seat. Carly has a chance to rebound and get herself back into favorite status with Cook and Archie. Of course, Cook needs some rebounding to do as well! And he looked very humbled to be heading to the couches this week. So much for arrogance right doubters?

I don't know what else to say kids. This is really has be lost for words (yet I keep writing!). I don't think I've been this stumped since Tamyra went home before Nikki! So with that said, I have two more prepared sections of thoughts that I already wrote up for you.

And with that, I think I'm done! Is next week Mariah week? I think I read somewhere it was. Are they really all going to sing Mariah songs? Hmmmm Please Archie....sing "FANTASY" or "SOMEDAY" ! That really would make my night! But no, Archie will sing "There's Got to Be a Way" or "Hero" or "One Sweet Day" due to his Inspirational Music kick! Come on...dudes singing Mariah? There's something wrong with that! Of course, look at me....I know all of her songs apparently!

See you next week everyone!

Hey Mike! I think next week is Andrew Lloyd Webber week (at least according to my Comcast DVR).

ahhh thanks UJ! I'll have to rethink what inspirational tunes the Artichoke will sing!

Maybe MEMORIES! or Music of the Night....Lots of tunes to choose from, but he'll probably do one of those if he can! (if he's even heard of them)

I read that Andrew Lloyd Webber is in two weeks, not next week.

I hope Brooke steps it up some more. I want her in that finale.

Ian is correct - Idol's press release states Mariah Carey next week (despite what my DVR says!)