Say what you want about my methods. But I think I just pulled off the greatest April Fools joke of all time! (sorry Ryan, we all caught on to yours before you even started last night). The whole "Don't say her name and people will send her packing" campaign actually worked! Now yes, I did flub with my actual pick for elimination. It sure was a risk to throw her in there. But deep down inside for the past 2 weeks, I knew who was going home, I just haven't had the guts to put the name down! But at least we know that REVERSE PSYCHOLOGY for good or bad, works on the Idol Addicts Blog! Ladies and Gentlemen - The Homeless girl is sent off into the world to look for a home! REJOICE!!!! 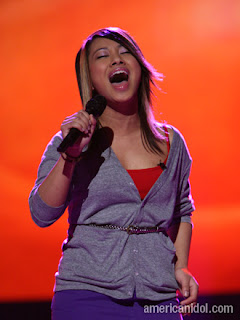 So she's finally gone! America actually got it right tonight. It was sad to see Brooke in the bottom 3, but all things fair, she did belong there. And the worst thing is? Through process of elimination in last night's blog I KNEW she belonged there! There I go again letting personal opinions of contestants get in the way. But that's just it, this is a really weird season. I said before that Brooke isn't the best singer in the competition, but what she does do works for her. It's tough not to root for that. It was the same with Chickezie. It'll be the same with Jason Castro when he gets voted off. Our final 4 should be who were the first 4 to make the couch tonight. David Cook, Artichoke, Carly InksArm, and Michael Johns. Will it pan out that way? It might! Yeah, big flub on me to put Syesha in the bottom 3 let alone pick her to go home. I don't think I really believed that would happen, but at that point I was into my "if I pick Ramiele again she'll be safe!" mode. Oh well, I think I've said this in seasons' past. Does it matter what order they all go in? It's not like they're going to win anyway! As long as the people we think are going to go the distance stick around that's all we have to worry about!

Wow, so next week is IDOL GIVES BACK. Doesn't that mean we'll be singing INSPIRATIONAL ANTHEMS on Tuesday? Wow, it's like Idol Gives Back was invented for David Archieargyle! He was up to his tricks again with the "I love the message. It's such a good song!" lines. It's almost like Ryan asks him about the tunes just to get him to say the same thing over and over again! I'm still getting my hate mail over the artichoke and that I should take it easy on the guy. Hey, you all have your favorites, and I'm the realist! What can I do about it? I guess all I can do is wait until next Wednesday when an inevitable Miley Cyrus and David Apocalypto (yes, world will end if he wins!) duet happens sending 11 year olds across the country into a mass frenzy! Just can't wait for that!!!

Lowlights from the rest of the results show:

Idol Gives Back. Yikes, I have no idea what to expect. We'll have our performances Tuesday and results show Thursday. The 2 hour Charity-thon on Wednesday. Not sure if I'll blog the Wednesday night show or not. I think it was a game-time decision last year. Since we already know there will be no results that night, I probably will skip it! But we can make that call next week!

Well, thanks everyone for supporting my short-lived campaign this week of "SHE WHO MUST NOT BE NAMED!!!" It was a good time, and we got the job done! Next up: Kristy Lee Cook! Let's get her off the show! Farewell Ramiele, I've already tried to say goodbye 3 other times and you just kept crying and pouting your way back onto the show! Well now you and Danny Noriega can go and re-create your very own Niagara Falls together!

SEE YOU NEXT WEEK!

Excellent recap but who is Artichoke? Is that your pet-name for Shequitha?

why thank you lol Artichoke is David Archuleta....i just can't stand to call him by that though and will find anything else to call him but that! Who is Shequitha, Sayisha?

Much fewer comments here than on the LOST blog!!

I'd actually like to see Mr.Artichoke gone next week, but I know that's not gonna happen.

I'd like to see Cooke and Johns as the final two and for the songwriter competition to cook up a good ROCKER this year for them.

Archichoke will just be another "This Is My Now" or "Do I Make You Proud" moment . . BLAH!

Well, maybe if we stop saying his name, he will disappear too!!! :-)

i'm with shanna! of course...isn't not calling him by his actually name technically the same thing? lol

Hey anonymous, which anonymous LOST Blog reader are you? Yeah, the Idol Blog never caught on as much as the LOST one, but then again, I've never promoted it as much lol LOST is a labor of Love....the Idol blog? Sometimes it can just be a LABOR! especially when we have to jump through hoops to convince people that Artichokes really do not taste good! lol

I agree with your top 4, except I'd replace Carly with Brooke. I think Brooke is much more interesting and likable than Carly.

My ideal Top 3 would be Brooke, Archuleta and Jason, and I don't even like Jason all that much. I guess that tells you how much I'm enjoying this season.

Okay, so did anyone else think that Dolly was terrible last night? I like her and all, but it just seemed like she can't sing. And Mike, she did look awkward up there without a mic, but it was more than that. I just kept thinking...what if she were a contestant on the show, what would the judges think? I guess she can get away with that style of singing because she is Dolly. Just seemed out of rhythm and out of tune.

Hey..Troll checkin' in?...wait until I tell the "Brother"..lol..Mike, she who must not be named got the boot because I slipped and said it!!!Should of went with my gut because I would at least of gotten my pool pick right. Don't know how much of next week I can stomach, though, so make sure you take good notes for me, ok?
Mar

I just didn't want to be mean to Dolly because she's awesome! But yeah, I didn't think she was singing too good up there. For some reason, when they get guests to come on to sing for results night, they always sound terrible! I'm not sure why that is!

I'll do my best Marian! lol Except you better tune in Wednesday because I don't think I'm going to write about it. I'm interested to see if they'll get the same ratings without an elimination pending. Of course, adding Miley Cyrus to the billing must boost their TWEENER ratings a bit! And there IS Brad Pitt lol

Thank goodness she's finally gone! I think Kristy should go next, and then we need a miracle to get rid of Archie. Sorry, I just don't like the kid. His voice has a Kermit the Frog sound to it! David Cook and Michael Johns are still my favorites. There are moments I really like Carly and others where I'm indifferent to her. I like Brooke too, but she really doesn't have the talent of the others. Same with Jason. They're both very likeable though.

Anyway, see you this weekend!

P.S. Did Shanna tell you we had a Bo Bice spotting last night?

Yeah, I'm still a Brooke and Castro fan but don't think they're anywhere near good enough to win this thing. I'm on board with the 3 you like too Andrea. Same feelings with Carly. Sometimes I think she's awesome other times...there's that damn ARM!

And that crazy ARCHIE....we must find a way to get rid of that awkward kid!

Shanna did tell me about your Bo run-in! How ironic that he was on the show last night to confirm it for you!

Did Shanna tell you I think I ran into Josh Gracin on a plane from Nashville to Philly? It HAD to be him. Just so bizarre because I couldn't stand him on Idol! What he did to Piano Man should've closed every Record Company door across the globe!