Congratulations America!  You did well.  We beat the system at got a better final 2 than the producers of American Idol wanted for us!  The favorite from the very beginning of the season to reach the finals has been eliminated from competition.  We have had some ups and downs with him during the show but reached our limits with the SCREAM heard round the world last week.   Ladies and Gentlemen bid adieu to your latest victim! 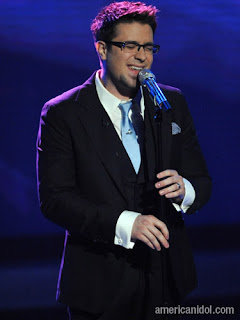 Eliminated: Danny Gokey
My Pick: Danny Gokey
Dialidol.com's Pick: Danny Gokey
It was heartbreaking to see him audition when we learned of his wife's passing so recent before the audition.   Of course, we also thought he may have been borderline using the story to his advantage to get on the show or just saw American Idol seeing this as a golden opportunity to exploit.  Whatever combination it was, was powerful enough to propel Danny to the Top 3 of American Idol.  Many of us were fooled for awhile that he possessed the stuff that stars were made of.   The man has a good voice, but he was outshone by several contestants in many of the weeks.   So, even though I liked Danny, it was right for him to be leaving this week.  To NOT be competing for the GOLD.   Farewell, Danny, I have Tony Robbins' phone number if you need a new line of work!
So that leaves us with the final 2 of Kris Allen (SURPRISE!!!) and Adam Lambert!   Underdog vs. Oversinger!  Should be a good time!  As I said, I am still praying for small miracles in that Kris can take down the behemoth.  Apparently, a million votes are separating these 2 contestants.   I guess I will have to up my text voting next week.   But this causes me quite the dilemma folks!   If I look at my track record of picking the right contestant, I am a solid 6 for 7 right now.  (RUBEN, really?????)   Do I dare go against the grain and pick Kris over Adam because I think he is the more marketable contestant?  Naturally, it comes down to how they perform next week.  Although, last year people had made up their mind on David Cook way before the finale aired!   This is a tough one folks, but I won't bore you with my internal dilemma anymore this week.  I will save it for the Grand Finale Recap Blog!
So in the meantime, we will take a quick glance at the few highlights and lowlights we had tonight.  (Come on, it was LOST Finale night, cut me some slack!)
Highlights:
Lowlights:
That's all I got kids!  Are you excited about the matchup for next week?  Do you think there is any hope for Kris to upset Adam Lambert for the win?  Are you upset that Go-Go Gadget Gokey is gone?  Let's discuss below!    Hope you enjoyed my mini-ramblings and I'll see you next week for the finale madness!
This blog can also be read and discussed on Gather.com Come check it out and throw some votes my way if you have spare time!
ce
Posted by Mike V. at 12:30 AM

I'm super-excited about this finale! For the first time, someone I've been a fan of since the beginning is in it. I actually think Kris will pick up a lot of Danny's votes, so if it's as close next week as it was this week, he just might be able to win the whole thing. I know I'm rooting for it to happen!

It stinks missing the LOST season finale, but watching Kris make it to the AI finale was worth delaying it until tomorrow morning.

Download the program DialIdol and use it for voting if your laptop or desktop still has a modem line. Auto-dialing rocks. I used it for the Final Four and voted for Kris solely... got in about 100 votes for him, would have been more, but I watched it late via DVR. Rest assured, Kris has my vote for the finale.

Where was Paula at the beginning of the show? In the bathroom? In wardrobe? In makeup? Under Simon's part of the desk?...

The home visits were interesting...they always are.

Hope Adam wins....he'll never be as forgetable as Kris will be.

Alvin: I watched LOST the next day online. It's what I do every week, since AI only airs once and you can watch LOST online and buy it on DVD.

By the way, Mike, did you see any of Danny's exit interviews? He keeps talking about how much he wants to inspire people. I think he may have a more successful career as a motivational speaker than a singer.

Yikes...I've been ignoring this blog. Sorry guys! Been wrapped up in LOST! I haven't seen the exit interviews Ian but that is hysterical. I mean that was the feeling I got every time he talked...he is trying to pick himself up and everyone around him. Hey more power to him! But man i got annoying! lol

Alvin, not sure if I agree that Kris would be forgettable. Adam surely won't be, but at the same time I don't think that necessarily will make him a HUGE SUCCESS. I really think American will tire of his shrilling voice and I just don't know who would want to listen to that over an extended period of time (album or concert or something)...that being said...he does have a great voice...so if he is able to contain it and not go for the HIGH notes all of the time...maybe he can do something with his career. But when I think GROWTH as an artist over the course of the season...i did not see that with Adam....I saw it with Kris and Allison.

But I think the odds are still in Adam's favor to cross the finish line.