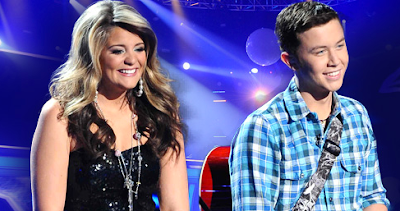 Hello American Idol fans!  Welcome to the American Idol Junior Finale!  The Justin Bieber Country Spectacular!  Baby lock dem doors and turn the crazy lights on high!  The finale of the Simon-Less American Idol has arrived.  The season overall?  Not too bad, not too bad.  They pulled me out of retirement for live show recapping, so that says something.  But maybe it was to help fill the void of an actual critical judge!  Anyway, we're here at the end of the road with 2 contestants that not everyone is thrilled about.  Scotty, the country crooner that early on I thought would tire on us, but eventually became the hands-on Taylor Hicksian favorite to win the competition.  Then there is Lauren, the early on favorite that we rolled our eyes at because of Nigel Lythgoe tweeting his support during the auditions for her.  We immediately wanted to hate her, but she won us over with that charm (well, a lot of us).  While she won us over though, she ended up lacking a killer performance to make us all swoon over her.  But she became an underdog that people wanted to root for.  People wanted her to have her moment and voted people that DID tire on us off of the show.  And while many of us voted and voted for Lauren to be in that finale with Scotty, I wasn't sure if I would want to vote in this final performance episode unless she really sold me that she deserved it.   Did she?  We'll have to find out.   I've been pretty much saying this was Scotty's competition to lose and he has seemingly dominated all season long.  Can one night turn the tide?  I just don't know.  But let's find out as we recap this finale as we always do!  ROUND BY ROUND!


First, a little business.  I'm really on a losing streak with my predictions as of late.  For a while I was unstoppable.  Let's take a little trip down memory lane.  Don't worry, I won't do what I used to do and recap each finale before I recap THIS finale!  (Disclaimer, season 1-3 picks are not documented on this site, so you'll just have to trust me!)


So there it is.  I did not favor on the Teenage texting voting that has now become a major player in this battle.  They're voting in their male hearthrob idols.  It's all just a theory, but the evidence is pretty scary.  Does that mean Scotty has this in the bag?  And will I take the safe route and pick him?  I'm 6-3 on a 2 game losing streak.  Yikes.  What to do.  Let's recap and find out!
Round 1
Contestant's Choice of Previous Performance
Loved that there wasn't judges feedback until after 2 songs.  But, it was to make room for a ridiculous Coke Commercial and the traditional Idol winner singing the "Goodbye Song" to a montage of this season's clips.  (Go David Cook!   No Go to Usher Wannabe with his Ninja Marching Band Glow In the Dark Drummers!  Dude, wearing sunglasses at night is sooooo 80s!)
Anyway, Round 1 was pretty easy to judge, and I judged them before I heard Randy's ridiculous and repetitive comments.  He was a little more subtle about it.  Scotty was the hands down winner of round 1.   No contest.
Scotty 1, Lauren 0
Round 2
Famous Country Musician's Choice 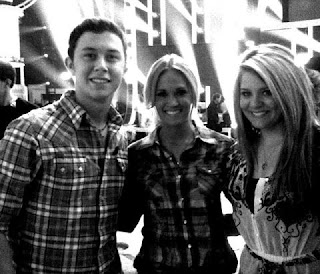 I don't think this round was even close either.  The judges can't just pick a clear person and take a stand like Simon used to.  Yeah they gave Lauren the edge, but it was a BIG edge.  Lauren came tonight to put on a show and show people something they have been hoping to see for a long time!
Scotty 1, Lauren 1
Cue ninja drummers and Coke commercial.  Be POSEEEETIVE!!!!  Seriously, how many downloads do you think this song is really going to get???
Round 3
The Dreaded Idol Song and Contestant's First Single
I'm not going to go and say that the 2 songs picked out by Jimmy Iovine were the greatest songs ever written.  But they were MILES and MILES better than the crap we've been hearing for the 9 years prior.  It seems like they finally got out of the mold of trying to write a "POSSSEEEEEETIIIIVE" themed song and just wrote a viable song for these contestants to sing.  Something that speaks to them and their journey.  And, by gosh, I think it worked.
Sorry Scotty-files, I like the guy too but I agree with the judges.

Scotty 1, Lauren 2
THE PICK
So, that's it.  In my opinion, Lauren won the night.  Does that really mean much though in the scheme of things?  By the time a finale rolls around, usually these things are already decided.  We have seen Lauren in the bottom 2 before.  Never have we seen Scotty there.  Dialidol.com has had Scotty dominating the entire season with the exception of one week (it just happened to be Lauren that week too).
This is where we need to call back on our 3 year history.  David Cook, Kris Allen, Lee Dewyze.  Ever since texting has taken over the nation and the American Idol voting system, it's been near impossible for a girl to win this thing.  And a teenage male hearthrob has been in the final 2 each time.   So, do I take the easy way out and declare Scotty the winner?  Or do I go with my gut and have a little faith in America?  Truthfully, I don't think either of these kids needs to win.   Earlier on in the season, I would have said Lauren needs it more than Scotty.  But both of these 2 have a future in country music.  And they're so young they're only going to improve.
It's a tough call, America.  But, really, what do I have to lose?  I'm already on a 2 year losing streak!  And I really don't think America wants to make Lauren cry.  We've seen it before and it made all of our hearts melt.  Therefore, I declare that the winner of American Idol 2011 is.......
(DRUMROLL)
LAUREN ALAINA!!!!!
(I probably just sealed the deal for Scotty)
In all honesty, I'd be happy for either of them if they won.  They both seem to be very sweet individuals with a decent career ahead of them.  I've been rooting for Lauren in this latter half of the season.  And even when I rolled my eyes at her in the beginning, I couldn't help but be interested in her growth throughout the show.  America likes to see a contestant improve throughout the show.  America likes to have someone they can root for.  If the past 3 years have indicated anything other than Male Idolism, it was that they didn't want the ALREADY ESTABLISHED STAR to win.  They like the one that built up a following throughout the show.   Oh sorry, I just started laughing and had to stop typing.  I just accidentally referred to David Archuleta as an already established star!!  Anyone remember that video he made right after losing Idol? The Crush song?  Ooh, the video is good times.  Anyway, you know what I mean.  Probably applies more to the past 2 years with Adam and Crystal losing.
Plus, it's time for another girl to win, wouldn't you say!? And if Nigel has any input, he'll make it happen!
Anyway, I'm sure there will still be a lot of people who thinks Scotty has this in the bag and they have every reason to think that might be true.  We'll see what happens!
But, it's finally time to close the book on yet another season of Idol.  We thought I was done last year, but here I am again.  Next year?  Eh we'll see!  I'll most likely skip the auditions again maybe just having one post and commenting time permitting.   But, this season may not be over yet.  I may find time to do a results show post for this final episode.   And with that, I'll turn the floor over to the dedicated commenters!  What do you guys think?  Does Scotty still have this thing sealed up?  Did Lauren do enough to win?  Will Haley still end up annoying us all and winning anyway?   Nothing would surprise me anymore!    Hope you enjoyed my ramblings and I'll see you after the results!
Posted by Mike V. at 11:09 PM

Even though I've been rooting for Scotty since the beginning, I kind of want Lauren to win after she outperformed him. Still, I think Scotty has it in the bag, and I wouldn't be sad to see it after supporting him for so long.

I have to say, the winner's single definitely favored Lauren. Scotty's was as generic as it gets and Lauren's was memorable and powerful (even if it was a recycled Kristy Lee Cook song).

Truthfully, I think a few of the winner's singles have been halfway decent. "A Moment Like This" was pretty good, and it still occasionally gets airplay. "Do I Make You Proud" grew on me somewhat. "This is My Now" worked well for Jordin, and Clay Aiken's "This is the Night" was a nice little tune. I guess since Clay didn't win it wasn't technically a winner's single, but it was his debut single as the runner-up, if I'm not mistaken. I can't believe I'm actually discussing the merits of various winner's singles. Moving on...

DI is making your prediction look questionable, but hey, you never know how accurate that thing is. It said Pia was safe the week she got booted, so what do they know?

Yeah, that's just it Ian. I assumed Scotty was going to win and figure he probably does still have it in the bag. (checked dial idol right after my "prediction") But, I'm rooting for Lauren so it was hard for me to pick him. She seemed to have so much momentum at the end of the night. I guess you never know, but I won't be upset if Scotty wins. And I don't really care about my "record" anymore lol With 3 incorrect picks, who cares?!

Random trivial fact, if Lauren wins, there will be 5 male and 5 female winners of Idol. lol

I also heard that the song was originally done by Kristy Lee Cook. Ouch lol Man, she was awful!!

As for winner songs. Oh yeah, "A Moment Like This" is clearly the best one. But, I think it's because I liked the winner that was singing it! And she brought her "kelly'ness" to it that made it even better.

The other ones you mention...eh. Never was a fan. I guess "This is My Now" wasn't too bad. lol

So, I guess we'll see what happens tonight. The results show will be a good time regardless I'm sure. I'm sure James will perform with Aerosmith, and still think Josh Turner will sing with Scotty. Maybe Carrie will be singing with Lauren??? I dunno. I heard Gaga will be here, so who knows what controversy that will lead to!? Looking forward it!

And the boys continue to dominate lol not a big shocker obviously! I'll recap in the morning!