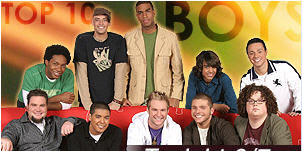 Well we're back folks! Exactly one week since we thought that the show had absolutely no hope this year. What else happened in the past week? Well the girls showed up the guys and gave a little hope back. Then, the weekend provided yet another IDOL scandal (Antonella Barba and some racy photographs) and another Idol Award Winner (Congrats Jennifer Hudson on the Oscar!). Just another week in the life of American Idol. But we're here today to break down the 10 male performances from this week. And, I must say, it was MUCH better this week on a whole. That doesn't mean some kids didn't stink up the joint.

This week was all about dedications. Sometimes the dedications worked for the contestants. More often than not, the dedication caused a backlash by the judges on song choice. A few sidestepped this issue with dedicating the PERFORMANCE instead of the actual SONG and it seemed to work out for them. You'll see in my notes below! Speaking of which, even though my real-time blogging failed me last week, I did type up my notes real-time again as I was watching. You can see my thoughts as I watched the show, and then we'll gather back to tally up some final results!

So definitely some better performances tonight. It's coming down to simple math here now. There are some people that are just going to stick around and others that are not. Here's how I see it.

Should be safe tonight: Phil Stacey

Judges say was good, but I disagree: A.J. Tabaldo

Well, I really wanted to give Brandon that spot in the top 12. But tonight was pretty rough. And yes, it's not always the worst 2 performances that get sent packing. But Brandon has had 2 rough performances in a row now. So has Sanjaya. I think Nick is right on the edge of getting the boot too. I just don't think he has a powerful enough voice for the long haul. But time will tell.

So if my calculations are correct, 4 are a lock for the 6 male spots. Which means 2 spots are open and 4 will be vying for them next week. It's really going to come down to next week's performances to see which 2 will grab them. And of course, the 4 locks just have to make sure they don't screw up too badly!

Hope everyone enjoyed the blog. See you tomorrow!