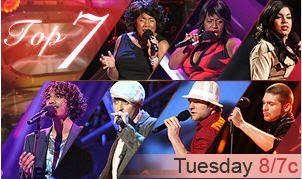 Well kids,here's a news flash for you. I didn't hate the show tonight! I know, shocker isn't it? Usually people cringe at the thought of Country night. But sometimes the country tunes can bring out the best in people (and expose others for the frauds they are!). But, for me personally, I'll attribute my enjoyment to my growing interest in the genre of Country Music. Through my "Tennessee Connection," I've slowly been introduced to the Country world, and it's not really all that bad! Sure, I dabbled a bit in the past with a little Shania here and then a little more with with Carrie a few years back. But I've gone as far now as TiVo'ing the CMT Music Awards that aired last night! (Our Girl Carrie won the big award by the way!!!!) Anyway, enough about me, let's get onto this year's wonderful contestants! (okay, well I still have to have SOME sarcasm in my blog!) Tonight Martina McBride did everything in her power to help bring the best out of these contestants. Some passed with flying colors...others failed in very awful ways! So let's see who we think will be going home after my favorite episode of the season! 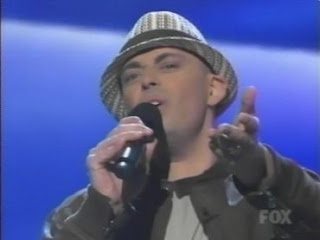 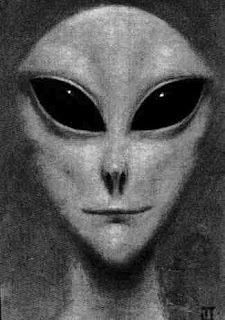 You know, I gotta hand it to the Bald headed beauty of an alien. He actually didn't do too bad this week. Martina noted that his voice can be pretty nice at times. And come on, High Fiving and Chest Bumping members of the audience is always worth some points. As well, as pointing out executive producer Nygel Lythegow (or something like that). He sang mostly in tune, was having fun and was far from the scary sightings we've seen of him before (get it? Alien? Sightings!? Oh yeah..I'm stretching I know!) With Phil being on deck to be eliminated, this could cause a shocker. All 3 judges liked, but Simon still said it might not be enough, since it took him 10 weeks to get to this point. I dunno, I'm thinking the dude is safe. If history has proven anything in the past....if you have a decent performance...you're usually safe. Usually when the shocking eliminations happen, it's when a good performer has an off-week and you consider them safe. (Any clues at what I'm getting at???) 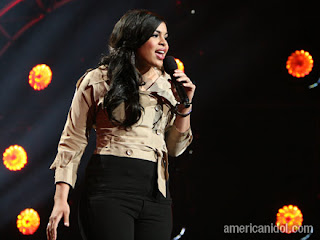 Well, Jordin did a great job with a great song and Simon finally is on board that she may actually win the whole thing! (Finally, dude) Loved it! And Randy is right to keep harping on the 17 thing. Just goes to show that these judges never expect anything big out of the teenagers on the show. But she is consistently bringing down the house! Now, while she WAS great, I know a certain girl in Tennessee that sings it best, so Jordin will have to rank 3rd to Martina and her! You still have the crown Shanna ;-) 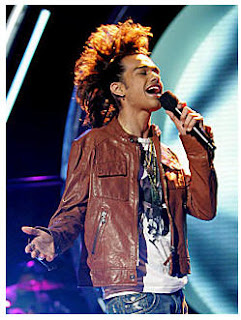 Song: "Let's Give 'Em Something to Talk About"
Artist: Bonnie Raitt

Why do I get fooled so easily? The pre-performance clips of Sanjaya always get me hoping that he's actually going to do well. And then.....he sings. How much longer will this last folks? I'm predicting a bottom 3 visit this week. Until his elimination, he will continue to butcher one great song at a time yet befuddlingly (it's a word......well now it is!) do justice to songs like Besame' Mucho. What is wrong with the world? Seriously? 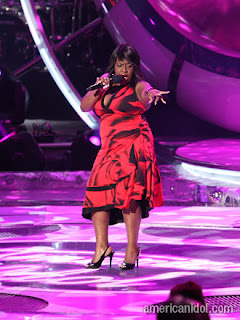 OH NO NO NO NO NO NO!! NO SHE DIDN'T!!!! Yeah....of all people, KIKI is the one that tries to do Carrie Underwood. Hamburger at Breakfast? Yeah that's a good analogy Simon. This was incredibly, horrifically (yeah I made up this word too!), ridiculously awful! Sure, if you've heard the song 1000 times like me and have seen Carrie perform it a zillion times, you're used to seeing this sweet small-town girl sing a song about driving on ICE with babies in the back seat and praying to the Lord to start driving! Then, Hurricane Lakisha comes to a TV near you. Imagine the nightmares you'd have!! While Lakisha was praying to Jesus, she should've asked Him to take a look at her mouth and fix it once and for all (yep, the LISP and the oversized upper lip that her tongue gets stuck on!). If you remember last season, there was a plus- sized POWER VOCALIST named Mandisa who was an early favorite to win Idol. Her downfall came on country night doing Shania Twain's "Any Man of Mine." It was a trainwreck as well, but people thought she'd be safe. Well Simon has gone on the record giving KiKi some advice for next week. I'm thinking there may not be a need for the advice, but we'll see! I didn't like her before, but now? Now, I despise the woman! Those boots, though? ahhhh loved those GOLDEN BOOTS! 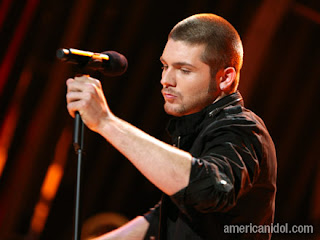 Well, I've had the privilege of hearing ol "Mayberry" last summer at the Rascal Flatts concert I was forced to attend! (okay, fine....there's a chance I may have WANTED to go!). It's quite a catchy tune, isn't it? Too bad it was wasted on Mr. Richardson. But I still found myself wanting him to do well because I like the song. Poor guy just doesn't have the voice to go much further in this competition. Some parts sounded alright. And I still think his fans will bail him out since he was in the bottom 3 last week. It'll be close though. But everyone had to love when he went on his rant that "Nasaly is a form of singing!" Sure it is buddy! 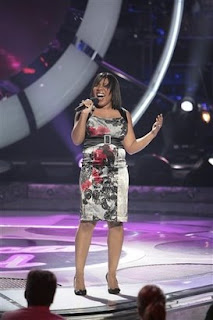 Woaaaa...Melinda got a makeover! She got her Hair Did! I even saw a hint of neck! Crazy stuff.....whatever she did this week. She needs to keep doing it. Because I actually found myself thinking "Wow, this is actually watchable AND enjoyable!" Never heard the song, but it was good. Performance was great. It would seem official now. It's a two way race between Jordin and Melinda. Sure, the judges will have you believe that even Blake or Lakisha could win too, but let's be real! If both Melinda and Jordin are not in the finals...it's going to be pretty easy to pick who's going to win! If they both make it? Man....I'm going to have my work cut out for me! 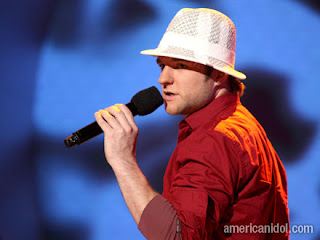 Blake didn't do TOO bad. I still see him struggling to hit a lot of those high notes. But he's got the look and unique style going for him. And Randy and Paula like him. I mean Paula said he has 'ISMS! Wow......It's all so clear to me now! Man, I'm actually pretty stuck on what to say about Blake here. And last time I struggled to come up with SOMETHING to talk about....(Gina Glocksen) she got booted off! But I can't see Blake getting kicked off just yet! And we'll just leave it at that!

So, I think I have my bottom 3 picked out. But let's just rank the performances first from best to worst. And then do our picks!

That being said...this Sanjaya nonsense is really starting to take its toll on my picks! The bottom 3 SHOULD be Sanjaya, Lakisha and Chris. But we just don't know what's going to happen with this crazy dude. Phil has consistently been in the bottom 3, but redeemed himself tonight a bit. Still wasn't super fantastic though. Once again...it could be anyone! (except Melinda and Jordin) Alright...here we go!

It's a risky move, but you gotta take risks in this world if you want to shock people! Once again, it really could be anyone. But I have this nagging feeling that Lakisha is going to be in for a shocker. We'll see after the 1 hour results show tomorrow night! (YAY!) Don't worry, at least it's not 2 hours like next week's!

That's it everyone. Hope you enjoyed my ramblings and I'll see you tomorrow!

Did Phil make you all excited about Mr. Urban? If I'm not mistaken I think the country concerts you saw last year outnumbered everything else combined! I think you've been converted. ;-)

Thanks for the karaoke props, btw! ;-)

I agree that Jordin and Melinda were in a league of their own tonight. Melinda isn't always my favorite, but she was awesome tonight. I really loved that song...I'll have to check iTunes for it!

Ok... lots of opinions about this week!!
I am not a fan of Melinda but the makeover was great.. the hair, outfit and song..perfect.
I didn't love Jordin. I am a Martina fan so it was a tough sell for me. I didn't love the arrangement. Something about her rubs me the wrong way.
Phil was great, glad he finally got good reviews from the judges.
Poor Chris! I really like him and he was just not that great.
Still love Blake...tough genre for him but I think he pulled it off.

Now does anyone have an opinion about Simon rolling his eyes after Chris said something about VT? Then Simon goes and says something after the commercial. Classic!

Yeah, I went back and forth about commenting about the Chris/Simon/VT situation....but then I felt it was in bad taste for me to say Chris did it for votes. But Simon bringing it up at the end WAS classic. The whole thing was just awkward! lol

PS ~ Keith Urban or bust!! Can't wait for the concert Shanna and to meet your friend!

damage control for the drama on last night's show!

I can't wait for Keith either! August is still so far away though! And I think you'll love Dee...she's a little crazy like me! ;-)

HA! I am going to see Keith Urban in July. Beat ya! Plus, the bonus for me is The Wreckers will be there also. WOOHOO! Anyway, did anyone notice Simon tweaking Paula's nose during Phil's performance? Odd stuff. As for me, I agree that Melinda and Jordin were the best. I have liked Phil all along, so it was nice to see him get good reviews for once.