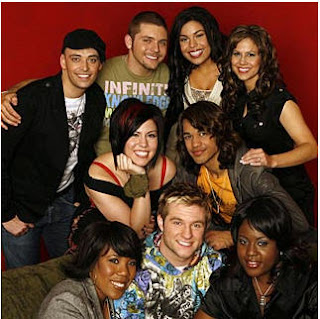 I gotta tell you. I am getting less and less motivated to write this thing every week. And with a growing reader-base, I am conflicted! I am actually surprised by how many NEW viewers are getting into Idol this year. I have heard very often through this season about how people are watching for the first time and really enjoying. So it makes me wonder, have I just watched too many seasons of the show? Have they all been this bad and I'm just fooling myself? Or is it that it's just the same thing but a different year and a different crop of contestants? I would buy into this train of thought, but then I find myself watching American Idol Rewind on Sundays and reliving the Glory days of season 1 with our buddy Kelly Clarkson (more on her in a second!). If this is the first season people are watching, then I could understand the entertainment value. But for the 6 season vets who think there is absolutely nothing wrong with this season, who are you kidding? It's baaaaaad. I don't care if I sound like a sheep! There are a couple people that can sing....but, and I said this a lot last year, relatively speaking to previous seasons...if you put the best from this season up against some prior seasons it would be interesting to see who would come out on top. Actually, if people didn't become recording artists after this show it would be awesome to see an Idol Showdown between Kelly, Carrie, Ruben, Clay, Tamyra, Craptasia, Daughtry, Yamin, and all of your favorites. That would make for an exciting season 7. But with their hopes and dreams already fulfilled...kinda makes for a pointless show, doesn't it?

Okay, I'm delaying. But let's talk about something REALLY exciting. Apparently Kelly Clarkson has ended her stand-off with refusing to appear on American Idol...and hopefully is trying to make amends with the show after a rocky couple of years. Of course, she won't be gracing the Idol stage but headlining some DISNEY stage in another city DURING an American Idol broadcast. And, who are we kidding? Kelly has sold 10 million copies of Breakaway, she has a new album coming out soon and probably over 30 million will tune in for this big charity event. Are you not going to tell me that her new album "My December" won't be released the week after that event? Oh I'm thinking it's going to be close! I'm thrilled!

Ok ok ok....back to this trainwreck of a season where we are counting the ways Sanjaya can make a fool of himself and how many times Paula leaves her sentences incomplete. (oh wait...that's every season!) Only 2 standout performances to me tonight...and lots of mediocrity. When you have a week like this, there tends to be some surprises on elimination night. But we'll see what I come up with if I'm still awake after writing my reviews! Tony Bennett guided our contestants through the American Classics....here's what went down!

Elimination Pick: Phil Stacey - go ahead and let your hair grow out man. You might be able to come back next year as a whole different person! But this year, Haley's strip-tease techniques are sending you home!

That's it. For now, I am placing Sanjaya out of harm's way until I see any hints convincing me otherwise! That's it for tonight. Hope you enjoyed the blog more than the show, as this is my goal in life these days! Share your thoughts below or just tell me how awesome I am! I don't discriminate! See you tomorrow night for the results!
Posted by Mike V. at 9:08 PM

I don't think I'd be surprised to see anyone go this week except Melinda or Jordin. I'm with you...it's boring! lol I can only imagine the things that would have come out of my mouth if the power had gone out during a Carrie performance...tonight, I didn't even care! It was actually a relief to not hear all of Phil's debacle.

Why do I keep watching???

Even "dialidol.com" is getting boring. It basically states this week that anyone can be voted off except Melinda. Now THERE'S stickin' your neck out!!