American Idol Season 9 - The Top 4 Go to the Movies with Jamie Foxx!

Hello American Idol fanatics!  That word "fanatics" is getting tougher and tougher to use every week isn't it?  The Top 4 brought us some Movie Hits over the years and brought in crossover Movie-star/Singer Jamie Foxx for his 2nd visit to Idol as mentor.  Jamie was in all-out ridiculous mode with his handing out of Contestant vs. Artist t-shirts to acknowledge where our Top 4 stand after their performances. I really don't know what else to say about it.  The ridiculousness speaks for itself!  We got 4 individual performances and then, like last year, brought on 2 duets which proved more entertaining than the solo performances.  How did they all do and what did I think?  Read on to find out! 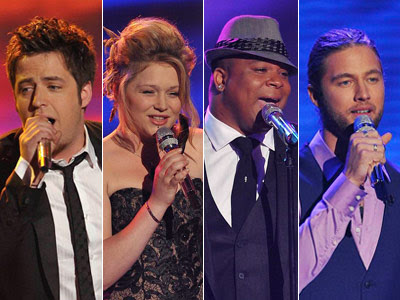 The Recap (Live Blogged)
1) Lee DeWyze
Song:  Kiss From a Rose
Artist: Seal
Movie: Batman Forever
Jamie got in Lee's face and told him to get in touch with his confidence.  We're hearing this every week now, right?  Most overplayed song during the year of Batman Forever.  But, Lee almost made it sound new again!   Definitely has a nice voice and I've been hearing it improve more and more each week.  Not sure I heard what the judges were hearing.  I thought it was pretty decent.  Not AWESOME, but not awful.  I think he'll be fine this week.  He has gained some momentum over the weeks, and I think it's gonna be tough to boot him this week.  Plus, maybe his duet with Crystal will be what people will remember in the end.  We'll see!
2) Michael Lynche
Song:  Will You Be There?
Artist: Michael Jackson
Movie: Free Willy
Big Mike set a goal for himself to make it to the top 3.  Didn't work out when he got eliminated a few weeks ago.  Of course he's still here because of that silly Judges' Save.  He refused to take the "CONTESTANT" t-shirt from Jamie during their meeting.  As always, Mike's vocal was solid.  But I dunno, something just didn't seem to be working for me.  Maybe, I was a bit bored or something.  Ellen made a good point that Mike's goal should be to win, not top 3.  First good point of the season!  Okay, in Mike's defense on picking a song from a movie about a whale, Lee did pick a song from a movie about a man that dresses up in a bat costume!  And ROBIN is in that one too!  Mike was okay.  It could be a tough call to see who goes home tonight.  Could come down to those duets!
3) Casey James
Song: Mrs. Robinson
Artist: Simon and Garfunkel
Movie: The Graduate
Jamie's advice was for Casey to seduce him.  Woa dude, easy there.  Hollywood has gotten to you Steamin Willie Beamon!  Casey pullin out the mandolin for this performance.  Nice.   I know Casey does much better on slow tunes and he really slowed down "Mrs. Robinson".  He sounds really good on it too.  But, what is up with these 4 always dragging these shows down with "ballady" tunes?   I wonder if they'll harp on Casey for that.   I thought he did a solid job though.  Not a winning performance.  Okay, I'm tired of the Kara/Casey stuff, but the judges saying the song was about it was pretty funny!   Of course, Kara killed it by continuing to talk about it!  I would think it's definitely between Michael or Casey to go home tonight without having heard Crystal's individual performance yet.
4) Crystal Bowersox
Song: I'm Alright
Artist: Kenny Loggins
Movie: Caddyshack
So funny, I was thinking last week that a Kenny Loggins song might make it into Movie Week!  Not tough to do.  Jamie gives Crystal the artist shirt but he wants her to prove it.  I'm already giving her props for doing something upbeat.  And of course, she sounds awesome!  Plus she got mustache percussion guy front and center.  He has cracked me up since "Black Horse and a Cherry Tree" in season 5 with Kat McPhee.   Never heard the song, or if I did I just don't remember it from the movie.  But come on, when you hear that voice, that rasp, that range, that awesomeness...it's hard to see any contenders for Mamasox!  I know Lee will give her a run for her money for the cool factor, but I don't see anyone else competing.   And look, if the judges give her good comments, she doesn't talk back!  It's win-win for everyone!
The Duets (Live Blogged)
The Elimination Pick
I think I have pretty much stated everything I wanted to state above.  Let's just get into my crazy picks!


Eliminated: Casey James -
For me it was a toss-up between him and Mike.  There could be a shocker in here somewhere, but the fact is that Lee and Crystal have yet to see the bottom and I'm guessing that it won't be any different this week.  Casey and Mike have both been there, and Mike seems to have gained momentum or picked up some voters since his SAVE.  I still think the Judges' Save is ridiculous, but we won't talk about that now.  Casey will live to woo women another day, I just don't think it will be on this stage!
That's all I have for now folks.  What did you think of tonight's show?  Pretty much a snooze fest?  I totally agree.  Who do you think will go home?  Tune in to see Daughtry, Barftasia and Bon Jovi on the Results Show.  Hope you enjoyed my ramblings as always and I"ll see you after the results!

MikeV...I suspect you probably won't have much time to comment on my comments about your comments (due to the excellent episode of Lost tonight and the onslaught of comments that should fill your blog over there) so I'll just try to be brief.

Loved both the duets much more than the single performances.

Ellen's comment about "yes, I have loved a woman" was hilarous, truthful and non-threatening. Learn to laugh MikeV; it'll do you good (and I'm not even a supporter of same sex relationships/marriages, etc.)

Now, Simon's comments on freeing Willy or whatever were certainly over the line and he knew it.

George, I'm going to comment for the simple fact that I'm glad you said it was excellent!! I'm getting beat up on twitter for announcing that I loved it! People are getting pretty cranky as we approach the end of LOST. It's just not what they were expecting and they don't know how to handle it lol

Fine, you caught me! I chuckled at Ellen's comment! But it just keeps reminding me of the fact that she's there more for comic relief than to actually give critiques of performances.

You gotta understand...with the tight schedule I'm on with these blogs...I barely have time to think about what I'm typing before I do! lol My whole objective is to get the Idol blog done or mostly done before I start watching LOST. They really screwed me with putting LOST on Tuesdays this year. My schedule was perfect in years' past!

it also doesn't help that this season has been so sub-par that I just can't get into it as much as I have in the past.

So if some of my comments seem not thought out too well, that's the majority of the reason! You'll probably see an improvement in blogging for the Final 2 Performance blog since LOST will have sadly ended the Sunday before lol

Anyway, thanks for keeping me honest and now back to LOST blogging!

I know I didn't become a regular reader of this blog until Season 7, but I remember going back and reading your old recaps to see what you were saying about the performances at the time they aired. You weren't so high on Chris Daughtry's "Have You Ever Really Loved a Woman" originally. What made you change your mind?

That's pretty funny Ian. I just went back and read it lol I'd say go up one comment and read what I wrote to George. i'm really off my game this year!

What made me change my mind? Selective memory. I recall season 5 as a pretty decent season compared to the crap we're being dealt now. So, in hindsight, and considering Daughtry's success since leaving the show...I think it just made me remember the performance in a different light!

I have no other excuses to fall back on. But kudos to you on remembering what I had to say about it. Impressive! And...I must say...a little STALKERY! (j/k)

Ugh...i really am stalling on this LOST blog! lol

Thanks for the rub MikeV! I completely understand the quandry you're in with doing both blogs but you do an excellent job for the most part.

(FWIW, Lost's episode is getting hammered BIG TIME on the television without pity forums, among others). But I still loved it.

Since my beloved WINGS are out of the playoffs, is there anymore room to temporarily jump on the Flyers bandwagon?

The more the merrier George! I just wish I had time to watch more Flyers games! Maybe tomorrow night I will have time with there only being that darned results show lol

Thanks for the props on the blogs....and yeah...LOTS of people are really not happy with this episode of LOST. I liked it too...but I was fully prepared for what they had in store for us. Maybe some people weren't. I also thought we got more answers than I thought they would provide lol

Heh heh. I'm not a stalker, really! I think the only reason I remembered your negative review is because a lot of people thought that performance was one of the best of the season, so it was interesting to me that you didn't like it so much.

I had mixed feelings about LOST this week. It was interesting, but I was expecting to be blown away by it, and it didn't quite do that for me. Perhaps I'll appreciate it better on repeat viewings or after some of the discussions it generates.