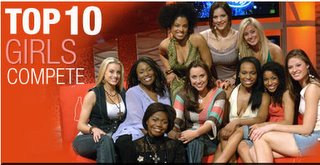 Another round of performances from our lovely ladies. The top 6 favorites are still performing well enough to stay in the top 6. The 4 that remain have their work cut out for them, but one of them I felt improved over last week. Want to find out who? Keep reading! The 10 contestants performed in reverse order from last week. Guess that keeps things fair. Here we go:

So here we are. Decision time. If we needed a bottom 3 this would be very easy! But, we're not in the top 12 yet....so we just need to pick 2! Let's rank the 4 that still need to be booted off. 7. Melissa 8. Kinnik 9. Heather 10. Brenna. It's as simple as that. I don't know if I'll ever succeed in my dream of getting all 4 picks right in these semi-finals, or getting the bottom 3 right and picking the right person in the top 12 to get booted. But I'm all about taking risks. And, yeah it's not a big risk...but it's an educated guess. Here we go!

So, some of you are asking why oh why did you not pick Brenna to get eliminated? 2 Reasons. Reason #1, Simon's declaration that she WILL be gone. Reason #2 (loosely based on reason #1) - http://www.votefortheworst.com/. The site has gained much popularity over the years of Idol. Jon Stevens inexplicably went on a run. Scott Savol, the same. There will never be enough people intentionally voting for the worst to ruin the show entirely, but Brenna was so bad, that people WILL be inclined to vote for her tonight, especially with Simon's declaration of dismissal. And with the bottom 3 being almost equally bad, I think that gives Brenna the edge for one final week.

Anyone have a beef with my picks? Let's hear it! Who do you think is going home? Well, that's it for tonight. See you tomorrow.