Yup...I should always go with my gut and never listen to Simon again! I mentioned I thought Melissa had sung her "GOODBYE" in Tuesday's performance, but Simon threw me off! And my botton 3, UGH! I knew deep down that Ace and Lisa were questionable. And worst of all....I had craziest feeling that Kevin Covais would escape elimination (and might for quite some time). But, naturally I went against all my instincts and went with the safe choices of "WORST PERFORMANCES." Not so safe, is it? Once we get to that top 12, it's a whole new game. During the semi-finals fans get attached to their favorite Males and favorite females....and maybe once the top 12 arrive they start only voting for one. And...well what happens? Favorites during the semi-finals are lost or forgotten. Especially when they don't put out their strongest performances. Sure, I had Ace as a wildcard pick for a bottom 3 spot.....but Lisa was screaming for a bottom 3 pick too, and I totally let it go! I blame myself for this. I should've seen all of this coming. And I've learned my lesson. I am going with my gut from now on. I'm not going to take a stand and predict what should happen! This is American Idol, not "Let's let Mike vote people off as he sees fit!" Hey people love Kellie Pickler! Even I voted for her last night, so others must've done the same thing. They want to give her another shot. So why on Earth did I put her in the bottom 3? Yep, because her performance wasn't good. Rookie mistakes and I make them every year!

Anyways...enough of my rambling. If you haven't figured out what transpired tonight from my mumbo jumbo above here it is: 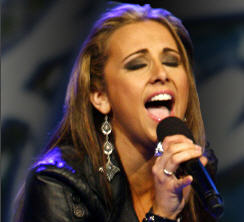 votefortheworst.com is probably having a field day with the fact that Kevin didn't even show up in the bottom 3. I'll tell you, people aren't going to forget to vote for Ace and Lisa next week, and Ace and Lisa aren't going to make it easy for them to forget. They'll bounce back. So, I think this show is going to be as unpredictable as ever. But we now know that Mr. Covais has some support whether it be for the right or wrong reasons. We're going to have ourselves one rollercoaster of a ride to the end. And I'm on board!

One final note, wasn't the FORD Commerical worth the wait? I mean, we get a little Duncan Sheik musical adventure in the woods and Ace dressed up as Mr. Tumnus! No wonder Elliott loved it so much!

See you guys next week for another fun-filled 2 nights of Idol as the top 11 continue to diminish. Rumor has it Barry Manilow will be appearing. Could it be the 50's Theme week to go along with his Hot Selling 50's Music album? I'd put money on it. But before you invest in any of my stock, take a look at my recent track record of predictions!
Posted by Mike V. at 10:56 PM