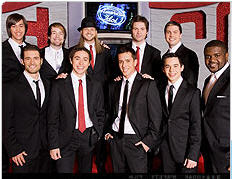 Welcome back! We're still trucking through these semi-finals but at least the performances are improving a bit this week! The guys came back with a vengeance and picked out some tunes from the 70's which we got to enjoy on various levels depending on the contestant. Some were great, some were okay...some were just very unintentionally hysterical! Or you know...you could be Yeagermeister and just self-proclaim that "We're ALL killer singers this year" Don't be modest there Jason...please...don't hold back! I mean has anyone ever dissed 6 previous seasons worth of contestants while being so obnoxious about one's self in a sentence like Mr. Yeager did tonight? How AWESOMELY fantastic is that? Anyway, we're getting ahead of ourselves as always. We have to figure out 2 contestants that are going home! Before we do that, I did promise that I'd lightly touch on last week's elimination show. Here's the brief summary!

And that's it. Moving on to our top 10 guys. Who is going home? Who may win the whole thing? Yours truly may have found himself changing his mind a bit this week. Let's chat:

Alrighty...so it's time to cast our votes for who is going home! Here's how I see it.

Trying to be eliminated next week instead of this week: Jason Yeager, Luke Menard

Tried to be bold this week with the Robbie pick. It just seems too easy to pick the worst 2 performances. Jason Castro had an off week and he might not make it to the top 12, but his week 1 performance should be plenty to get him through this week. Danny is unfortunately too unique to say goodbye to just yet. Luke? Maybe Ryan referring to him as Dawson's Creek will remind the world how much they miss James VanderBeek in their lives. But for now, we shall be prepared to say farewell to Steve the Pirate!

That's it for tonight kids. See you tomorrow night after the Top 10 Girls perform!

LOL I love reading your recaps. I noticed Luke's slip up on the words to his song, too! Never thought I'd be proud to admit that I know all the words to that song :)

Can't to see what you have to say after tonight!