"Ain't Too Proud to Beg" for the Judges' Save, who lost on American Idol tonight?

It shouldn't come as a big surprise who was eliminated from American Idol this week. The bigger surprise was who joined him in that bottom 3! I had our booted contestant pegged for last week and thought he might have done just enough to escape his inevitable fate this week. Ladies and gentlemen, your ousted American Idol top 10 contestant: 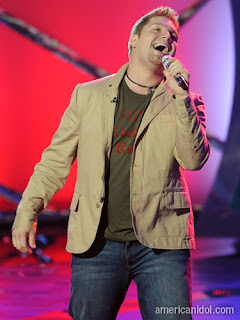 
The persistence of the Megan Joy voting public is just beyond me at this point. I guess I need to stop picking her to be eliminated and then it just might happen! But Matt Giraud being in the American Idol bottom 3 during Top 10 week? Unacceptable! Granted, it probably had to do with him going first. I thought he had done enough to be remembered! Oh well, he is safe and he will get the voting boost next week from concerned supporters. All will be right with the world. And even though Megan and Scott live to see another week, it was Michael's time to exit the competition as well. So farewell Michael Sarver, you were a great guy with a decent voice and no shot at super stardom! Enjoy the Summer Tour!

Once again, we did not hear the theme for next week, so no predictions from yours truly on how next week will pan out. As long as the shows are on Tuesday and Wednesday, I'll be happy!

Let's get to our Highlights and Lowlights for the night on American Idol's results night.

Whew, so I guess that promise of half hour results shows is just totally gone yet again this season. Oh well, I do love me some unintentional comedy! And we got oodles of it tonight! Not much else I can say tonight folks, so hope you enjoyed my bashing of the results show. Farewell again to Michael Sarver...and I'll see you next week for the American Idol Top 9!

This blog can also be read and discussed on Gather.com Come check it out and throw some votes my way if you have spare time!
Posted by Mike V. at 9:03 PM

I actually liked Ruben, even if he was prerecorded. David Cook's going to be on next week's result show, and he's already taped his performance.

I'm glad to see I'm not the only one who thought Stevie Wonder's Obama love was unnecessary. It's too bad he's lost a lot vocally, because his songs are still great.

Yeah, I have nothing against Ruben. He's a good guy and a good singer (unsuccessful Idol winner though)....the song wasn't too bad either, even if I fast forwarded through most of it. I was mainly griping about how AI tried to pretend it was live when it was clearly not. It was almost comical!

I heard about Cook being pre-taped too. It's kinda bizarre how they're doing it that way. But if they want a "famous Idol" on each results show they have to make it fit to whenever these guys are in L.A.

Definitely unnecessary. If it was anyone but Stevie I would have lost a lot of respect for them. But come on...it's Stevie Wonder! He can do no wrong. Amazing songs, amazing legacy. But yeah..his voice isn't quite there as much anymore.

Are we certain that all the Idol group songs are lip-synched and pre-recorded? If so, why?

Seems to me that it used to be all live. Why the change and when did it begin?