American Idol: Well, America got it half right!

Okay, I won't say I'm surprised by what happened. I just didn't pick part of it! 2 female performances were the worst of the night, and only one got what was coming to her. Ladies and gentlemen, our top 13 is now 11. Here is who we didn't vote for! 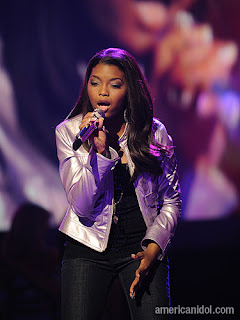 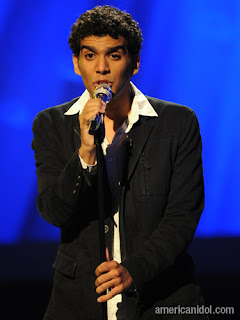 So, with enough rambling after my picks Tuesday night, I did cover the scenario where people wouldn't have voted for Jorge. I fall in this category. I thought he did much better than the judges thought, but I didn't bother voting for him! Oops! I also said that Megan's awfulness was memorable enough that she would probably stay. So, once again I went against my gut and have the results to support it!

Oh well, in the end, I still picked Jasmine right and Jorge wasn't going to be winning the show. Duh, Paula already told us who is in the running! But it's an atrocity that Corkrey is still around! We'll take care of her next week! We have more business to discuss.

Okay...this is kinda ridiculous, right? Granted, it's only one time for the season that a unanimous judge vote can save an eliminated contestant. This would create a double elimination the following week to make up for no elimination that week. The reasoning? Chris Daughtry, Tamyra Grey, Jennifer Hudson... all eliminated too early. On these shocking elimination nights, they have decided to reduce the tension of the show and allow them to come back (because Chris and Jennifer haven't gone on to bigger and better things???) Here's the deal though, it's only allowable until they get to the final 5. Okay, guess what? Tamyra was in the final 4! Chris? pretty sure he was in the final 5. So what are they saying here? That people like Michael Johns will be saved in the future? WHAAAAT? So, I guess in the long run, there's really no loss here. Except tension, and stakes. There could be a good contestant that decides to mail it in one week and just anticipate getting saved! And if that darn thing gets used on Lil Rounds, I'll quit this crazy blog! Okay....soapbox over. Let's just see how it plays out!

Highlights from the show

The other low lights from the elimination show

So that's about all I have for the results show recap. I'm sorry I was only able to deliver you one eliminated contestant accurately! But if I average 1 a week, then I should be just fine! (yep, because they normally will get rid of one. Sometimes I like to state the obvious!) Didn't catch the theme for next week, so I guess we will be surprised! Hope you enjoyed my ramblings as always and see you next week!

This blog can also be read and discussed on Gather.com. Come check it out and throw some votes my way if you have spare time!

I thought it was funny too how they mentioned Tamyra and Daughtry, both of whom finished in 4th Place, as people who could've been saved. These people don't know the history of their own show.

Yeah, that was kinda lazy on their part! Unless, they just figured people out there didn't remember. Or they just didn't care! The rule doesn't hold much weight without bringing up the 2 biggest shocking eliminations on Idol!

But this rule is just silly.

Nice recap Mike. Not too much bashing of Ms. Rounds (and getting "round"er everyday I might add...lol) Sorry, that was just a lil joke....oops, pun purely intended.

I'm all confused over the intentions of the new rule as well. We know Tamyra came in 4th; so did Daughtry. So neither one of them could have gone any further if this new rule was in place then.

Now, Jennifer Hudson could have. She finished 7th behind the likes of Jasmine Trias (remember her) and the not so illustrious John Stevens. I believe Jennifer was kicked out in the week where Fantasia, Jennifer and LaToya were all in the bottom three. Maybe Idol is just trying to avoid that type of week.

This season is already destined to go down to a Lambert/Gokey finale. Don't think the new rule will come into play at all unless one of those two guys are in danger of being knocked out early.

FWIW, is there a worst judge on any reality show than Paula??? I could handle her at first because she was good on the eyes and I felt sorry for her being next to Simon's childish antics. But now???? Egads! She has really, really aged and her incomprehensible statements are really an insult to what usually is a top-notch show.

We've got Tara now and she seems ok for the most part. Can we play the part of being a "cold-hearted snake" and petition her fine derriere out of there???