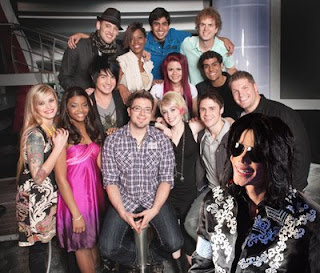 Hello Idol Fanatics! Here we are again. The big stage. Ryan making a grand entrance as prophesied by yours truly (although, I think him flying around the studio on a wire still would've been the way to go!). Oh and remember I talked about HDTVs showing up in the most random of places? How about the STAGE FLOOR?! Ahh good times. So, all of our questions about the top 13 answered very quickly by Simon. It will be a top 11 by the end of Wednesday night! Whew, I don't know if I could take an extra week of Idol this year! Ahhh but then the mysterious TWIST (another one???) was thrown in right at the end of the episode that will include the judges in some way. Guesses? Could this be yet another way for the Idol producers to control who wins the competition? It's getting out of hand isn't it?
Oh well, that's not what we're primarily here to do. We're here to figure out who is going home. It's Michael Jackson night. I've gone on and on about how no one should try to sing Michael Jackson on Idol. It's normally been a disaster. But overall, I was impressed tonight with the performances. It seems like every season, the first week of the Top 12 finals pulls out all of the stops. It always seems like everyone can win (well not EVERYone. There's always some stinkers!) However, once next week rolls around, I think we will all be singing a different tune with which contestants are the pretenders and which are the real deal! Let's figure out which 2 will be going home!

Yikes, so we need a bottom 3 (or will it be a bottom 4?) and then need to get rid of 2. Those new to the blog...this is how I do my process of elimination!

Who are untouchable based on tonight? Danny, Lil, Adam, Matt
Which Fan favorites should stick around? Scott, Allison, Alexis, Kris
Who essentially gave forgettable performances? Jasmine, Anoop
Who gave a memorably awful performance? Megan
Who is out there that I couldn't really categorize? Michael, Jorge

Elimination Picks: Jasmine Murray, Megan Corkrey - Jasmine, you've had too many chances to impress and you keep boring us to sleep! Megan, you miss your baby, maybe it's time to go home!

Ugh, this is a tough one. I really don't think 2 girls will be leaving when there are only 5 of 13 to start with. But I couldn't pick between the 2 as they both are out of their league! I think Megan does not belong in this competition, but because it was so memorably bad, she probably has the better chance of sticking around (sympathy vote). But, I really can't see Anoop leaving either. Tough call. And there's always Jorge that maybe others out there were bored with. Oh well, I made my picks, I'll stick with them!

Ahh, but do my picks even matter anymore? What is with this twist that we are going to find out about during the results show? Are the judges going to get to VETO an elimination? If they decide they don't like someone during the remaining 10 weeks, will they replace them with Tatiana? The possibilities are endless! Anyone ever watch that episode of Friends when Joey was going to host a Game Show called BAMBOOZLED?! The rules were incredibly hard to follow but absolutely hysterical. Yep, that's what is happening on Idol these days or they could be just taking tips from the Fonze. I'll reserve my judgement until we find out more!

Kelly Clarkson and Kanye Crappola will perform on the results show. Both probably worth watching, but the latter mainly for laughing! Hope you enjoyed my ramblings and please discuss below your thoughts on the show, the pending twist and picks for the elimination. See you after the results!

This blog can also be read and discussed on Gather.com. Come check it out and throw some votes my way if you have spare time!

I think the twist is that the judges pick who goes home from among the bottom vote-getters. If so, I think it's complete BS and I won't cast any votes until they abandon it.

I actually thought Jorge did well too. I was surprised that the judges were so hard on him.

I don't care what anyone says, "Lady Mix-a-Lot" is a great nickname!

If the judges pick, the point of the show is completely lost. I was also pleasantly surprised with most of the performances last night. I'm still not getting the fuss over Lil...I guess they think we need another failed ghetto experiment. HELLO! People tire of hearing all the sobbing about not being able to provide for your overgrown family. I'm sure she just needs a few more WIC vouchers and the kids will be fine. But for now, be gone Corkery!!!!

I'm with you on Adam. I do not get what all of the fuss is about. I hated his performance and couldn't believe how much the judges slobbered all over it.

I thought Jorge was pretty good too, Mike, so you are not alone!

Mike, you actually "hate" Lil? Pretty strong dude. I know she doesn't have your vote, but to "hate" her?? Man, that's taking it way to far IMHO.

Well, at least you are "HUMBLE" about your opinion! Settle down dude...it's a blog. Do you think I really carry a vendetta against anyone on a reality TV show? I was just expressing my DISLIKE for her as a contestant on the TV show. Maybe it was a strong word, but seriously dude...it's just a word! But as long as you feel better getting your humble opinion out in the world, I guess that's fine!

in the future i will say "CAN'T STAND HER" is that better?

btw...since you're going to nitpick my words....it's "TOO" not "TO" you were looking for there.

C'mon Mike...I wasn't nitpickin'--that part was obvious. My point--to be clear--is that I thought by expressing your hate for Lil, you stepped over the invisible line of ethical conduct. Yes, she's not typical of what a reasonable person would consider as responsible in bringing babies into the world but I'm not going to hold that against her. Definitely not in a popularity-based singing contest as A.I.

I certainly do understand that it's just a blog and that you're protected by your 1st right amendments, blah, blah, blah....but I am usually a huge fan of your writing and your style. This one just disappointed me.

For the most part, I love your Idol and Lost critiques. There's not a week go by that I miss them. However, if you're going to try to disparage my comment(s) by being offended and critiquing my obvious lack of journalism skills, then perhaps it'd be better for us that I never comment again.

For what it's worth, hate is NOT just a word; it's a feeling that expresses your apparent level of discontent with Lil and I do believe it will leave you with a jaundiced eye when you blog about her.

I am not a huge fan of hers; certainly I do not know her, nor any relatives/friends of her. But I think her style is probably relevant to those in the know in the music industry (of which I am not). I hope she does well.

Frankly, I was just taken aback by the intensity of your intolerance of her. Nothing more, nothing less.

I apologize for my outburst and the typo correction...I happened to catch your comment at a bad time. Rough day at work and that's the first thing I saw after a stressful meeting! lol I'm usually more professional and diplomatic with my responses, as I'm sure you're aware!

I really didn't (still don't) think I crossed the line with the use of hate there. I actually was giving her a compliment in the same sentence. The HATE was meant to come off more sarcastically. I'm sorry you didn't see that way. I do not have any ill-will towards Lil Rounds, but I have made it my personal goal to convince the world (as I did Archie last year) that she should not win. So far, Archuleta made it much easier for me!

As for the babies thing....well that's more my disgust at Idol for promoting these irresponsible storylines and inspiring kids to look up to these contestants. Of course, it's not like Idol really implied anything than a struggling family surviving after a tornado. But, it was once again, me trying to find humor in the situation! Sometimes it goes well, other times not! (I'm thinking Lady Mix-A-Lot may be a better direction to take this!)

Anyway, can't promise I won't slip up again when discussing Lil, but I will try to be more mindful in the future.

I do appreciate the kind words about the blogs and please do not hold back any comments in the future. I "hate" making enemies! It's not my thing! lol

Mike....Apology duly noted and accepted. It's unfortunate that the art of writing doesn't always reflect the tone in which it was written. Sarcasm, as you know, is usually easy to ascertain but not always. That probably was the case here.

I appreciate the sincerity of your comments and look forward to many more Idol and Lost hours to peruse, with your reflections leading the way.

I try my darndest to reflect that sarcasm all of the time....but sometimes, you're right, just doesn't work.

yikes...we just bury the hatchet and you have to go ahead and bring THAT up!? lol I'm going to call SARCASM on that and withold my comments until next Tuesday night when Lil attempts to take on hits from the stars of the Grand Ole Opry!! I'm getting flashbacks to Mandisa taking on Shania Twain and an early elimination. Ugh...but I already forgot about the Judges' Save Rule! I'm sure she'll do just fine anyway. There's enough "marginal" talent under her that need to go before she's on deck!

The more exciting part...Carrie, Randy Travis and Brad Paisley appear on Idol next Wednesday. It's gonna be a good time!