"The Scott Is Over" an Inspirational Campaign Ends on American Idol

Well, it is a bittersweet moment for me to tell you that I am on a roll this week! Sure, my picks went home 2 weeks in a row, but this one is tough. It was a true inspiration who lost on American Idol this week. We knew he had no shot at winning the whole thing, but we still enjoyed his time on the show. Ladies and Gentlemen, pay your final respects to one of this year's Piano Men: 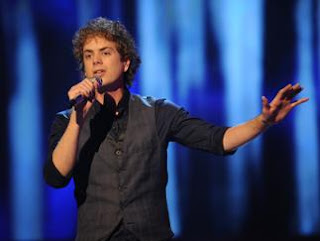 Farewell Scott! You will be missed. Let's talk about more exciting things like the fact that Lil Rounds was in the bottom 3! Finally, America is starting to get the picture. Although, I wonder if Simon was referring to her as someone they would potentially save. I will gripe on the Judges' Save more in a bit. Things are progressing slowly but surely to the inevitable contestants. So it makes us think that with Anoop being in the bottom 3 even after a decent performance, he might be next on the list to leave us. America has been unpredictable in the past on this crazy show. We will have to tune in next week to find out!

In a pretty boring hour, here are the highlights and lowlights I found from tonight's ON TIME episode of American Idol.

That's really all I have tonight kids. Hope you enjoyed my MINI-Ramblings and I will see you next Tuesday for some more!

I agree with you on Scott. He seems like a good guy, but it was his time to go. It would've made him less likable if he'd stayed several more weeks and everyone grew to hate him.

I thought Frankie Avalon was the highlight of the evening. I don't care what anyone says, "Venus" is a great song.

Yeah, I think my comment on Frankie came off a bit wrong (I fixed it). I have nothing wrong with the guy, I was just saying the whole episode was bizarre!

And of course, I'm sure a lot of younger folks watching the show may have been scratching their heads wondering who this random guy was that came out singing and making Simon gush like a school boy? lol

Agreed Ian, I'm glad Scott left when he did. I would've hated to start making fun of the guy!

I'm really, really, really hating the power trip that Simon is so evidently displaying in regards to these "should we save or not save" the next axed Idol. Who is he kidding?

We all know that it's supposed to be an unaminous vote anyway, so first of all, for Simon to pretend that he has a heart is pretty foolish in my book. Secondly, for him to actually be interested in the other judges' opinion is simply not going to happen. Thirdly, to play on a contestant's raw emotion is simply not right. It's rather cruel. If somebody COUGHMEGANCOUGH, has NO chance whatsoever, let him/her go without all the charades. It's senseless and demeaning to everybody involved to portend there is hope when no hope exists.

Simon is in this for one reason and one reason only: the almighty dollar. I would think that the producers or whoever that pays for his, ahem, "services" would at the very least give him (along with the other judges) some sort of list detailing what is expected of them, not just judiciously but in terms of behavior, respect, etc.

Seems as if no one cares about that at all. Especially Simon!

Lastly, it is inane that Idol runs long almost every single time. If I was an actor in, say, Fringe, or whatever, I'd certainly would expect that my performance would be shown at the scheduled time listed in order to please my fans. Yet, Idol has alienated many by their bombastic and holier-than-thou-because-we-bring-in-the-big-bucks ways.

As Dave Ramsey would say, "I hope I wasn't unclear."

That is preety neat ed. I just watched megan on ew.com in an interview called idolatry. She speaks on her feelings toward the judges and is really intresting how she thinks the judges were very rood to her and others.
Thank you for listening to me my english is not that good yet.

Scott was an amazing contestant and I was really sad to see him go. I was rooting for him all season so far. I wanted to share with you an app I found in the itunes store that I thought was cool for any and all Idol addicts, such as ourselves. It is the new FREE version of the original American Idol iPhone app. I like it for the exclusive videos it has! Check it out at: http://phobos.apple.com/WebObjects/MZStore.woa/wa/viewSoftware?id=310915760