Hello American Idol fanatics and welcome back!  It's Inspirational Songs week in preparation of the big Idol Gives Back charity event on Wednesday.  And let me be the first to say, I am 6 times uninspired and 1 time SUPER-INSPIRED!  Any guesses what that means?   Yep, only one contestant really fit the bill for me tonight.  The rest pretty much brought their consistent mediocrity.  (Well, maybe Lee was better than the the other 5, but still nothing compared to Crystal!)   Alicia Keys was brought in to mentor and she pretty much gave them all the same advice.  FEEL THE SONG!  Nice try Alicia, these Robots don't know how!

Anyway, let's get into it kids!  As always, I live-blogged my thoughts as I watched.  Keep in mind, I have lowered my expectations for this season, so if I say someone is good, it's definitely on a scale compared to previous superior seasons.  With the exception of our final performer! 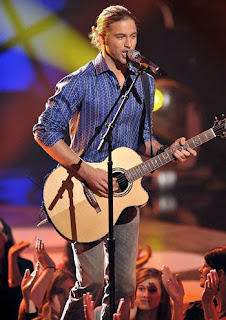 Song: "Don't Stop"
Artist: Fleetwood Mac
Alicia advises Casey to bring some personality to the well known song.  If you ask me, there is no difference between this performance and "Power of Love" that he did a few weeks ago.  Just him and his guitar and singing a bit hit song that everyone knows.  Yeah, you can tell he's trying to add a "Casey-vibe" to it and he's doing his guitar solo which doesn't win singing competitions.   It was good, was it a winning performance?  No.  But I'll defer to the judges.  Yep, judges all pretty much on the same page.
2.) Lee DeWyze 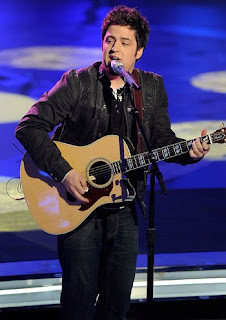 Song: The Boxer
Artist: Simon and Garfunkel
Interesting song choice, great song.  Alicia tells Lee to BE THE BOXER!  We'll see how it goes.  All of the power rankings have Lee ranked at #2 to Crystal this week.  And really, who else is there that we can see competing at this point since Siobhan fell from weirdo grace?  He thought he did a great job with this performance.  Not chill-inducing or anything, but at least it's a great song and not something you'd expect to hear on Idol.  He brought some raw emotion to it too which was a good time.  The judges are saying he had his MOMENT tonight.  So, I think he'll be safe!
3.) Tim Urban 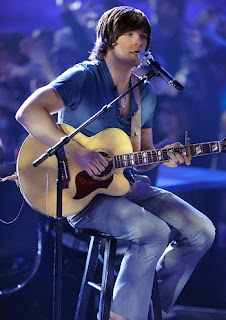 Song: Better Days
Artist: Goo Goo Dolls
I'm sensing a trend.  Alicia tells him to make it his own...to feel the song!  Well, it's not awful again!  Tim is finding a way to do just well enough, and to improve just enough to make it look like he's evolving.  And hey, maybe he is!  He's definitely not an Idol winner, but he has certainly turned a few heads by his longevity on the show.  And he did another solid "TIM" performance in this one.   The judges came down on him pretty much not knowing what to do with him.  Simon did mention the improvement over the weeks.  Don't know what to do with this kid.  I'm thinking he'll be safe for now.
4.) Aaron Kelly 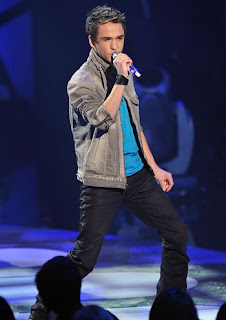 Song: I Believe I Can Fly
Artist: R. Kelly
Whew, this could be really good or treacherous!  Alicia tells him, no surprise, to bring the emotion.  Now, I've liked Aaron throughout this run.  But at some point, when we start getting down to the nitty gritty, it's going to be time for him to go, right?  Some of this performance felt that way to me.  But some of those high notes near the end were pretty impressive too!  And of course his big ending note was a good time too.   Definitely a better singer than Tim Urban.  Sounds like the judges are more on board with him than Tim too.  But Simon is sort of making sense of my feelings. He would have turned the radio off.   Yeah, probably me too.  He's definitely a candidate for elimination, but with 7 left, a few will be.
5.) Siobhan Magnus 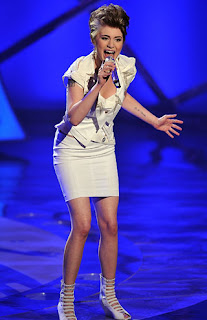 Song: "When You Believe"
Artist: Mariah Carey
Ugh, Alicia tells Siobhan to go for the "MONEY NOTE."  I'm so sick of her high notes!  Can I just say that she looks like Miss Peacock from Clue: The Movie tonight?  Feathers, butterflies all over.  Well, there's no doubt she has a great voice.  But, when it's coming from such a bizarre person, I just can't take it seriously.  And that vibrato was a little over the top!  I'm sure the judges will eat it up as will some of you!  Thank God!  The judges all hated it except Ellen!   Why do they have to let her talk after the performances?  It just makes it unbearably worse.   That was worse than the performance!
6.) Michael Lynche 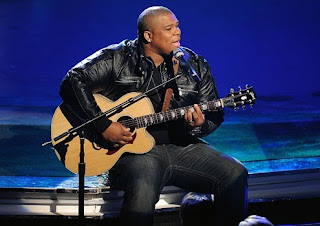 Song: Hero
Artist: Chad Kroger
Big Mike picked a song from his 200 Song "Playbook".  Alicia tells Michael to bring people on a ride.  Okay!    When it started I thought he was going to have his MOMENT with the song.  He started it off all acoustic guitar and no band.  And yes it built up through the performance.  But I found it pretty repetitive once he got into it.  The judges weren't really on board either.  Not sure why Simon brought up Spiderman.  It's still an inspirational song regardless of where it's from!  But I still wasn't a big fan of the performance.
7.) Crystal Bowersox 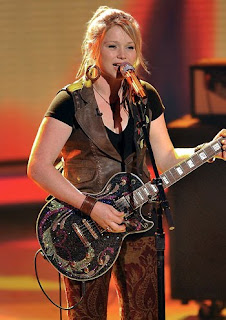 Song: People Get Ready
Artist: The Impressions
Who cares what Alicia has to say.  Crystal is going no instrument and it's gonna be awesome!  Oh nevermind, Ryan is an idiot.  Here comes the band!  What is there to say that hasn't been said already?  She's amazing, and wow she broke into tears at the end of the song.  That's a sign of truly feeling the performance, right?!   How about that awesome Mic Stand too with the lamp?  Good times.  Can I declare her the winner yet!?   Eh, I'll wait a couple more weeks.   Looks like she was crying because she saw her Dad in the audience. awwwwwwww so sweet!

With only 2 girls left in the competition, and as much as I'd like to see Siobhan take her feathers and fly away this week, I just don't think it's gonna happen.  So we should see one of the boys exit this week (that is, if they're REALLY going to eliminate someone on a charity night.  We've been duped before)  So here are my thoughts.

Sorry buddy, it's been a fun ride but sometimes the dream has to end.  This week is your turn!  And if they don't eliminate anyone this week, I'm pretty positive Aaron would be one of the ones to go next week.

So, tune in Wednesday night for what I'm sure is to be an All-Star spectacle and a heartfelt night as we are asked to donate to some good causes.  I will be there in all of my recapping glory and to capture our latest ousted contestant (if it happens).  Hope you enjoyed my ramblings and I'll see you after the Results and Idol Gives Back!

I'm glad I'm not the only one who thought Tim was OK. I mean, he wasn't great or anything, but he had some good moments in his performance.

I think Casey's the one going home. He went first and was pretty forgettable. Also, he hasn't been in the Bottom 3 before, so his fans might take for granted that he's safe a little more than Tim's or Aaron's fans might.

I'm also glad the show was only an hour tonight. It means I got to watch LOST! Things are really getting interesting on that island!

Nothing would surprise me at this point Ian! If I even spent more than 2 minutes thinking about it I may have gone with Casey lol I had him in my bottom 3 for a second then switched it.

It was all a race against the clock tonight. I finished the Idol blog, then watched LOST so I could finish it all by 10. I'm thrilled Idol is FINALLY down to hour episodes on Tuesday.

But man that LOST blog is still killer. Done the night portion of the blog...time for my 3 hours of sleep lol

Anyway, good call on Casey and how he could fall through the cracks. Definitely possible. Although I'm not ruling out them trying to pull a fast one on us and not eliminating anyone. We'll see!