Hello American Idol fanatics!  Nothing pleases me more tonight than being wrong.  Nothing at all.  It has finally happened.  The reign of weird has ended.  I know there were many fans out there, but come on folks, she was just too bizarre for her own good!   And anyone who actually thought her performance was GOOD last night, well...I'll be nice.  I just can't agree!   Ladies and Gentlemen, let's bid farewell to someone who made Sanjaya and his "faux hawk" seem tame!   Miss Peacock has left the building! 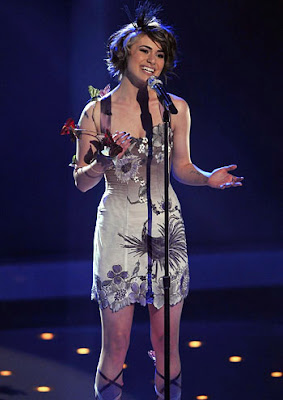 The best part of all of this?  Crystal Bowersox was in no danger of being booted.  The bad news?  Casey still found himself in the bottom 3 after having the best performance last night.   Maybe fans felt a false sense of security for him.  Maybe more people wanted to ensure Crystal and Aaron were safe for another week (that would be me for Crystal and my wife for Aaron and his sweet comments to his mother!)  In any case, I think America got the lowest vote absolutely correct.  I'll just admit that I didn't have faith it would happen.   So good for Michael evading the bottom 3 when he had a great night as well.

Not much else I can say except we're back to 100% Kara bashing next week!  Sorry for anyone I have offended with my dislike of Siobhan, but it had to be done!  Let's move on to the Highs and Lows - some of which, you'll notice, I blogged LIVE!

Lowlights
So, next week we head to the Frank Sinatra era.  Should be interesting with this crop of contestants.  I do love me some Frank though so I think it will be a decent show.  Harry Connick Jr. will be guiding our way through the soothing sounds of the great crooner.   And good ol' Mike V. will be back in all of his recapping glory to guide you through what he thinks of it all!  Hope you join me once again.  Until then, unleash your thoughts in the comments on how you feel this elimination show went down.   See you next week!

The Sons of Sylvia won The Next Great American Band contest or something like that.

Really surprised (but in a pleasant way) that Miss Peacock ends up in 6th place overall. Guess that means Crystal wins the Ladies Competition....WOOHOO!!!!

I understand why groups like Rascal Flatts and Lady Antebellum and so on, appear on Idol but it just seems to me that dragging this result show on and on for week after week is just inane. Didn't they use to do it in 30 minute shows?

Wanted to get your opinion MikeV on all these specialized weeks. I know there are some genres that are best suited for some contestants than others but do you think Idol's PTB's intentionally set up the weeks in a specific order before the season begins or do you think that may be some backrpom shenanigans being played? (Wow....that's a long run-on sentence huh? LOL)

Shania week was great. A whole lot better than I thought it'd turn out.

Thanks Adam for the name drop on the Next Great American Band! I'm so thrilled, obviously, that Siobhan got booted. I had lost faith in America, but this restored it a bit! lol

Yeah, I have complained in previous results show weeks of the ridiculousness of this show being an hour. The fact that this is a singing competition and they're bringing on big bands and artists, and celebrities plugging movies to fill out an hour is just out of control. It's a 50 minute commercial (including actual commercials) with 10 minutes of booting a contestant (if that). I'm not a big fan, but some weeks I'm in a better mood than others! lol

Sometimes I feel like Idol is making up these theme weeks as they go. I'm sure they talked to Shania AFTER she was so well received when the Audition Rounds aired. Yeah, I'm sure there also might be some discussion around the order in which theme weeks air to favor certain contestants. Nothing with this show would surprise me. It's clear that AMERICAN IDOL wants Crystal to win this competition....but I think America does too lol Of course, Kara still thinks she can push her stud Casey into the competition...based on him being in the bottom 3 after a good week? Not really a good sign! lol I think anyone that could go up against Crystal in the finale really isn't a threat to her. But we'll see!

Shania week WAS great...I'm a fan and I too didn't think it would turn out that well!

Thanks for your insights MikeV. I've always leaned toward the theory that Idol's PTB's had a favorite each year that they've tried to cram down our throats and they've probably scheduled these theme weeks accordingly.

Also, maybe I'm in the minority on this, but don't you think the full results of America's voting should be disclosed? For instance, I'm pretty sure that Seacrest said on air a week or so ago that the bottom 3 doesn't necessarily reflect the actual bottom 3 in votes. Outside of the revealing of the producers bias one way or another, what would actually be wrong with full disclosure in both the revealing of the bottom 3 along with the total number of votes each contestant garnered the night before.

Also, one more thing, in your opinion, why does Seacrest always state that at the end of the show you'll have "AT LEAST" 2 hours to vote? Is there NOT an actual deadline? Does Idol allow voting to continue until they get their favored result? Help me MikeV...help me!!!! ;)

LOL, I've actually never heard him say AT LEAST. But that is very interesting. Oh yeah, I'm sure there is tons of stuff that goes on behind the scenes. I've been a conspiracy theorist myself. As for disclosing actual votes, I think the issue with this is that you'd know who the favorite was from the beginning. If everyone knew that Taylor Hicks was receiving a ridiculous amount of votes in season 5 and that there was no hope for anyone else to win....would they keep tuning in? (btw...I base this on dialidol.com's weekly results back then. Not that the site has always been accurate. And of course, I always make my picks before checking that site!)

So I understand why they don't disclose the vote count. But you know they could also go to a more structured voting system where 1 person gets 1 vote. But they love getting 30 million votes each week!

Anyway, as for the bottom 3...i don't remember Ryan saying specifically what you said, but what I DO know is they never say that the 2 left standing are in fact the BOTTOM 2. Lots of people just assume we're looking at the 2 lowest vote getters when they send someone to safety. I have never subscribed to that. I think they make us think that certain people are in more danger than they are. Granted, being 3rd to last isn't very good either! LOL But I'd say it was a safe bet that MICHAEL probably was 2nd to last this week and Casey was 3rd. But what do I know?

Anyway, that's all I got for now!

Thanks again for your comments and time MikeV. You're the best.

If you get a chance, youtube some footage of some Idol episodes and I think you'll find that Seacrest does in fact state numerous times per episode that viewers will have AT LEAST 2 hours to vote after the show ends.

I think it's much more than a flippant comment; outside of one's obvious talent, I believe that it is THE prominent factor in a contestant's length of service on the show. Check it out because if it is as true as I believe it to be then I think that Idol may go down in history as less than legitimate than originally thought and certainly much less credible.