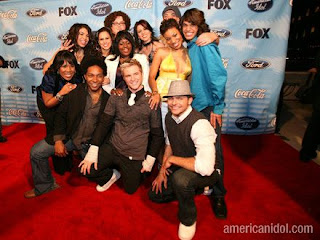 Alright America! We're back! Finally, Idol has gotten back to what they do best. The top 12 has started and it seems the show has kicked into high gear. Even I sometimes forget how this show can suck you in, even when the contestants aren't very good, or when even the good ones aren't even likable. It's just the whole show. And with each phase of the competition, it just gets bigger each year. The top 12 stage is all decked out, the band now has strings and horn sections EVERY week, Ryan has new introductory poses prior to each performance, and the GAY banter between Simon and Ryan has been taken to an all new (albeit, almost scripted) level. Add to that my new HDTV decked out in full surround sound, and you have a whole new way of looking at an aging Paula Abdul and seeing some strange colors that Randy picks to include in his attire.

But, we have 10 more weeks to hear me rant about the judges/host and everything that goes behind Idol. We gotta kick someone off tonight and it seems all too clear on who it should be! And that, as always, is what scares me. Let's break it down and try and figure out our bottom 3.

It's Diana Ross week in the top 12 and her affection for Michael Jackson (my bad Blake, "MJ") must've taken its toll on her because she was all about the parenting tonight. How did it transpire?

Well if you noticed, I mentioned many names that could fall in that bottom 3 tomorrow. And as always, I will not look at dialidol.com until after I make my picks! Here we go!

Who is safe? Melinda, Jordin, Lakisha, Blake, Phil
Who should be gone? Sanjaya, Haley
Who is in the middle of the pack? Gina, Steph, Chris R, Chris S, Brandon

Yeah, it's a crazy pick, I know. But I have to go with History on my side. And once again, I'm trying for reverse psychology! In all honesty, if any of the 7 non-safe people went home tomorrow, I would not be surprised and no one really should!

Well, that's it everyone. Hopefully, you'll be relieved that the show is entertaining me again. I'll try to complain less in the future. But I won't make any promises! See you tomorrow night for the results!