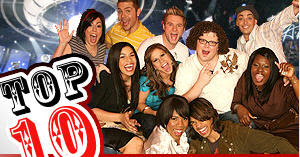 Okay, so what exactly was tonight's theme? Songs that inspired No Doubt AND No Doubt songs? You know, if they're going to have an additional 7 minutes of Idol, you'd think they could've explained the THEME better than for Ryan to say "Well, you know...we're gonna have songs from like ummm..Donna Summer....uhhhh The Cure! How about some NO DOUBT??? aaaaaaaand THE POLICE!" I mean, can you get more random than this? Ok ok...I get it. No Doubt has an ecclectic sound....derived from Reggae, 80's Rock, 70's Dance tunes and the infamous SKA music. So pretty much what they were telling us was....they didn't want to have a NO DOUBT Theme night because Lakisha and Melinda would be bored. Thank God they let them both do Disco tunes! woo hoo! I guess also the reason for the Non-No Doubt theme night....it was just Gwen Stefani there to help out and not the entire band....well because she's ditched them for a solo career. Of course, you could argue that Gwen's Ex-Boyfriend/band mate Tony Kanal or even drummer Adrian Young were reincarnated through Sanjaya's Mohawk(s)! Don't get me wrong....I'm a No Doubt fan and all, but something was really fishy with tonight's theme. Of course, it didn't stop them from featuring 3 No Doubt Songs....one from each of their albums. Convenient. Anyone want to track a skyrocket in album sales on those 3 albums starting tomorrow?

Okay okay okay...so what should I really talk about here? The performances for the most part were sub-par. Starting to become a trend! There was no crying girl tonight to keep the media buzzing....just Sanjaya's hair....and come on...this is getting ridiculous already. It's almost as if the producers are encouraging him to be an idiot! I'll stop delaying! We have a job to do, one more must go! And they are not making my job easy at going 3 for 3! Let's see what we can figure out!

Performances that were good, but I didn't care for: Lakisha Jones, Melinda Doolittle

Contestants that should be safe based on past performances: Jordin Sparks, Chris Richardson, Blake Lewis

Elimination Pick: Haley Scarnato - Sorry Haley, you just can't cut it with the bigger voices in the competition. You're out!

Tough one once again. Could be any of those 3 or maybe a surprse booting of someone else. But based on Sligh's previous popularity and Sanjaya's increasing popularity, it just seems that Haley is the only one without real OR fake fans. We'll see if I go 3 for 3....or if reality finally starts to set in for me Wednesday night! I don't know about you...but I can't wait for the Gwen/Akon duet! I'll be up all night thinking about it! Well, your turn...what did everyone think? See you back here for the results!

I agree with you on Lakisha and Melinda. They have great voices, but some of their song choices are just plain boring.