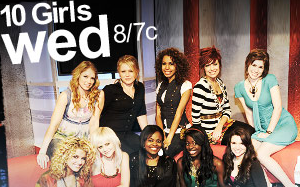 Hello Idol Watchers!  Well, I feel better tonight than I did last night watching the show.  Granted, no LOST to compete with it tonight, but still the girls managed to bring a little more to the table.  Maybe we can chalk some of it up to an extra day to practice.  Or maybe we can chalk it up and thank our lucky stars that Crystal Bowersox was able to make it to the competition (barely, but she was there!)   There were a few performances that I would say solidified some Top 12 slots.  And there were some real clunkers out there as well.  For some of them, I think it was a little bit of "OPPOSITE DAY" going on with what the judges were saying and what we were hearing at home.  Maybe it was just me, but we'll find out together!
So let's dive in and talk about the performances.  Once again we learned the contestants' deep dark secrets, and I have turned them into fun nicknames some!  You can thank me later!

Note to Randy:  Booing Simon during the intros?  Still not funny this year, dawg.
Note to Kara: Now that you're in on the joke of cozying up with Simon, not funny to play it up even more!

So that's it.  Some great performances, some so-so performances and some End of the Road performances!  Let's do the math!
Top 12 without a doubt: Crystal, Katie, Katelyn, Siobhan, Lilly
Middle of the Road: Lacey, Didi, Paige
Should go Home: Haeley, Michelle
My Elimination Picks: Haeley Vaughn, Michelle Delamour  Bonus Pick: Lacey Brown
Yikes, this is a tough call.  It could be 1 of 5 people, but I'm pretty confident it will be 2 of the 3 I narrowed it down to.   I'm pretty confident the 5 I mentioned will make the top 12 so of the 5 remaining I'm not sure who gets that spot.  Maybe Didi maybe Paige.  I would think they have the strongest shot.   And the only thing they have going for them is a weak group of guys to possibly get the boot before them once we start the top 12.   Anyway, I could ramble on forever.  I think we have done enough for the night!   I will be back after the elimination with more recapping goodness!  Hope you enjoyed my ramblings and I'll see you after the results!
Ending Credits
Please Click to Support!  I'm moonlighting at Gather.com and writing some entertainment articles, including re-posting these blog entries.  Every page hit gets me closer to a teeny tiny donation for my efforts.  If you enjoyed my writings, please click here  to register a page view.     And also check out my other writings at http://mvitullo.gather.com/
Check out my other Blogs:
LOST - http://www.lostaddictsblog.com/ (blog is back and on fire!)
FlashForward - http://www.flashforwardaddicts.com/ (back March 18th)
Posted by Mike V. at 11:29 PM

I'm with you on Didi and Michelle. I though Didi was pretty good and Michelle wasn't. I'm glad to know I'm not alone!

I agree that Lilly and Crystal are the two strongest girls, but I have a feeling they'll be splitting votes at some point.

It seems like there's always a "shocker" elimination in the cut between Top 16 and Top 12. I could see that being Katie this year. She hasn't impressed me to the point that I'd consider her a lock. She's likable, but after three weeks performance can override pimping.

It's really disheartening, but it's become pretty clear over the last couple of seasons that the judges are not there to judge the actual performance, but to nudge the voters toward their favorites (see Meghan Joy) or the contestants that they think can sell the most records. I'm with you, Kara is making less sense than Paula! She's all over the place with her comments. I could hardly concentrate on what she was saying because I was so distracted by that hairdo - she was definitely channeling her inner Snookie last night.

Ian, I could definitely see a shocker elimination happening. And maybe you're right on katie. I don't even think the judges were pimpin her too hard last night. I just thought she was pretty good!

Maybe Lilly and Crystal will split votes, but I really think they are 2 separate styles. Yeah the guitar makes them similar...but they do different things with it. And I think Lilly will mix it up a bit with other instruments eventually. And we know Crystal has the whole harmonica thing in her pocket! We shall see.

Jenn, could call on the Snooki thing! lol It's not even the hair for me...it's her whole attitude. Like she's too cool for school and she thinks everyone is in it with her! She adds no value to the show in my opinion. I hate when she says stuff I agree with! lol In fact, I still don't get why we have 4 judges. I think Randy, Ellen and Kara have morphed into pretty much the same opinion on things. Yeah, sometimes it differs...but what it stil boils down to is SIMON'S opinion. It makes or breaks the whole critique. Even if I disagree with him I'm still waiting to hear what he says. And if he thinks something differently, I think "well maybe it sounds different live" I just don't know how they're going to replace that.

Very depressing night and I didn't agree with the judges on most of the comments.

Haley ... *shudders* I'll give her props for listening to the judges; However, she can't tackle a song with that much range. She entered the competition at least a year too early.

Lacey ... Absolutely predictable performance and it wasn't very good. I want her to go home, but after what happened last season ... I don't see it happening.

Katie ... Great singer and couldn't disagree more with the judges. I think that she has a "problem" in that she seems really mature for her age, so she can't fit into the box that the judges are forcing her into. She'll definitely make the Final 4 though

Didi ... Thought that the judges couldn't have been more wrong. GREAT performance, loved her vocals, she listened to the judges and was absolutely slaughtered. She could have easily lost it on stage and started the waterworks, but manage to keep herself under control. Another case where the judges are trying to force her into the folksy box and she's browbeaten when she strays.

Michelle ... I thought that this performance was complete and utter crap. The second half of the song was atrocious.

Lily ... I know that you can't compare her performance to those of Syesha and Adam Lambert, but I thought that it was absolutely heinous. Her style doesn't appeal to me at all.

Katelyn ... Song was too slow, but I like what she can do with her voice. She has great control and I enjoyed her performance.

Paige ... She runs the risk of becoming Mandisa v. 2.0. I think that she should stick to her guns because once she goes into the belter box, the judges will never let her leave.

Siobhan ... Solid performance and that note was A. Mazing.

Greg, I think from what we saw of Crystal, she could probably swing something on theme nights like that. But we'll have to see!

Final 4 for Katie eh? wow...pretty bold prediction. I think she's good to go for the 12 but going as far as 4 might be a stretch this early. But hey, it's a prediction! lol

sounds like we were pretty much on the same page for all of the contestants and where the judges got it wrong. We'll see if america got it right tonight!