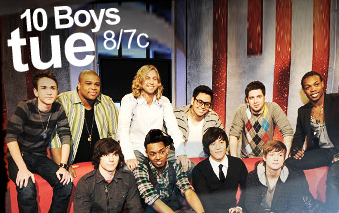 Greetings fellow Idol Watchers!  4 are down and 19 to go in our hunt for the next Idol.  And these kids aren't making the search very easy for us.  (definitely not a compliment either!)   The boys were requested to take the stage a day early due to an unexpected trip to the hospital for Crystal Bowersox.  I'm not sure if the extra day would have helped the guys get their performances fine tuned, but having less time certainly didn't!  There were a couple decent performances, but as a whole, the boys turned in another snooze fest.  If they want to keep going head to head with the final season of LOST, this show needs to get in gear! (yes, every night I pause Idol and watch LOST from 9-10 and then finish this watching this crazy show.  For anyone who was wondering!)

Let's get into the recap and then we'll pick who is leaving us Wednesday night.    One thing to note:  Ellen has now moved a spot over.  Looks like they're trying to figure out where she works best.  So the DAWG will go first again.  Thank goodness!  Any way you slice it, Simon is still the only one I'm listening to for value!  Not a good sign for season 10.    Each contestant was asked to tell us something we would never know about them.   Some things were better left unsaid!  Let's dive in!

Can you tell I was frustrated with this episode?   I'm sure I wasn't alone.  Let's try and figure out who is going home after the Tuesday Night massacre!
Should be safe?  Big Mike, Andy G, Casey Jones (oops!), Mullet Man, Lee D.
Sketchy Ground? Timmy, Aaron
No Question the worst of the night?  John Park, Jermaine Sellers, Todrick Hall

My justification - John was pretty forgettable and went 2nd.   Jermaine, a personal choice.  I didn't like him talking back to the judges and wanting to take Simon to Church.  I think that might turn off a few people too.   But I wouldn't count out Todrick either.   They were all pretty forgettable performances.

Whew, that's all I have kids!  I'll be back in my recapping glory to tackle Ladies' Night on Wednesday.  Hope you enjoyed my ramblings and I'll see you after the Wednesday show!

Ending Credits
Please Click to Support!  I'm moonlighting at Gather.com and writing some entertainment articles, including re-posting these blog entries.  Every page hit gets me closer to a teeny tiny donation for my efforts.  If you enjoyed my writings, please click here  to register a page view.     And also check out my other writings at http://mvitullo.gather.com/
Check out my other Blogs:
LOST - http://www.lostaddictsblog.com/ (blog is back and on fire!)
FlashForward - http://www.flashforwardaddicts.com/ (back March 18th)
Posted by Mike V. at 11:44 PM

Did I miss something in Alex's performance? I liked his voice and his personality, but I thought the performance itself was too nerve-wracked and shaky. Some of those notes were pretty bad. Oh well. I hope he stays anyway. He seems like a good guy.

I dunno, maybe I overrated him. But the dude has a Mullet! That gets points in my book! lol

I knew that Jermaine was completely out of touch with what he was singing when he winked and smiled his way through the line "don't punish me with brutality." Did he even understand what this song was about? Marvin probably rolled over in his grave.

p.s. I do the same back and forth on Tuesday nights! lol

It's sleepy throw-back night on Idol..........
WOULD ONE OF THE IDOL PRODUCERS DO US ALL A FAVOR AND TORCH THE STOOL!!! Maybe if they weren't all sitting, we could get some real entertainment. What's next, no shoes and laying on the ground?
I feel bad that Lee is Simon's big star. I don't see it. I saw it when he said that about Chris Daughtry. Or David Cook. We all know that the rules are different for whoever is singing. It was not original but that was ok for him. Tim Urban wasn't original (but since last week was soooooo awful, this too was ok.)

Could someone tell Todrick that his song was about domestic abuse? Maybe he would have gotten why that was kind of an untouchable song. I think he will go- but I wish it were Jermaine instead. WHy is God not rooting for anyone else but Jermaine? How extremely self-righteous of him. Maybe God needs to teach him a little humility.

I kept thinking Danny Gokey when Andrew Garcia was performing. Does anyone else?

I have figured out the problem of this years idol crop. I don't think ANY of them have EVER watched this show!! Casey James confirmed this. Case closed- haha.

All I have to say is that if we are now okay with mediocre, it's gonna be a long season! I will never be ok with the mediocre performances we have seen so far. Here's hoping for some quick improvements!!!

Jenn, yeah it was truly brutal! lol Glad i'm not the only one with the LOST/Idol conflict. It just has become so hard this year with the final season moving to Tuesday (PERFORMANCE NIGHT on Idol)...Idol used to be my blogging appetizer the day before. Now it's just a pain in my rear and making me lose sleep on Tuesday nights! Makes for a fun Wednesday work day! lol

Jennifer...i totally agree the rules are different for each contestant up there..for better or worse. They have their favorites and they also might base it on what they think a contestant is capable of.

If I didn't entertain myself so much with making fun of these kids, I probably would have abandoned the Idol blog years ago! So, I will stick with it this season. But I will not be happy about it, and maybe that is WIN-WIN for everyone! lol