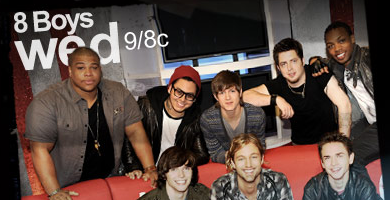 Hello Idol Watchers!  Interesting night wasn't it?   It seemed like an endless string of acoustic guitars for awhile and a pretty ho hum night with exception of a performance or 2.   I think we need to open up with a little Simon quote to Kara tonight don't you?  "What you said is complete and utter rubbish."   LOVE IT!   It hurt Kara so much that she was reduced to tears 2 performances later crying about how she has no children!  Yeah yeah yeah, I know it wasn't related but just give me that one.  This woman is no Paula Abdul.   Sorry!  Can't even make myself feel bad for her or even believe that she was that emotionally affected by the song.  Anyway, enough Kara bashing for now.   This is definitely going to be a rough week for my picks.  I absolutely have no idea what America will do tonight.  But I have some theories!
Let's break it down.  Randy, stop booing Simon!  I am seeing enough deja vu's on LOST this season!

So this is a rough one kids.  I'm not sure what I'm gonna do!  Well, let's do the ol' process of elimination!


(putting the names in a hat, shaking, closing eyes, picking out)
Elimination Picks: Todrick Hall, Alex Lambert    Bonus Pick: Andrew Garcia
I believe in the mullet power, but it's crunch time and I don't know.  I'm nervous for the kid!  I could easily see it being any of the last 4 I mentioned before my picks.   I am fully prepared to go 1 for 4 this week (Yes, Paige Miles is out of here!) but it's okay.  There is nowhere to go from last week but back down!   Tune in on Wednesday night to see how I did!  Hope you enjoyed my ramblings as always and I'll see you after the results!
Ending Credits
Please Click to Support!  I'm moonlighting at Gather.com and writing some entertainment articles, including re-posting these blog entries.  Every page hit gets me closer to a teeny tiny donation for my efforts.  If you enjoyed my writings, please click here  to register a page view.     And also check out my other writings at http://mvitullo.gather.com/
Check out my other Blogs:
LOST - http://www.lostaddictsblog.com/ (blog is back and on fire!)
FlashForward - http://www.flashforwardaddicts.com/ (back March 18th)
Posted by Mike V. at 10:49 PM

Lee: Fireflies? I would not have picked that song for him-- though it's an improvement on Hinders. He was a bit pitchy (dawg), and Bandzilla takes away the cool electronic aspect of the music. Not bad, but not anything special. And definitely not a better song like Kara said.

Tim: My reaction upon hearing the song choice: "Oh no. Oh god please no." But huh, I actually really liked that. So… apparently Tim Urban does have some singing ability. Who knew? Hopefully he's figured out his voice and he keeps it up (since I think he's sticking around).

Andrew: I agree with Simon about that. It seemed like he just wanted to do something SHOCKING and COOL. It just seemed very forced.

Casey: I'm not a big country fan, but I enjoy Keith Urban and I thought that was actually his best of the semi-finals.

Aaron: Groaned at the song choice. Then he sang and I groaned again because his vibrato was out of control and he was pitchy as hell. I'd be okay if he left. Then Simon chastised Kara for saying Aaron is too young and said, "It's a nice song. Get over it." Katie Stevens says, "WTF"?

Todrick: Oh good god, Queen. Why? And Somebody to Love? Elliot Yamin would like you to back the hell off his Idol catalog. At least he didn't re-arrange it into a disco number or something. So there's that.

Mike: Big Mike brought it. Great voice control, great range. On another note: LOL, Kara. All I could think about was if Paula were there. You think Kara was all over Simon?...what would've happened had it been Paula crying up a storm? Good gawd! LOL

Bottom two: Aaron and either Todrick or Andrew

Where do I start?

- First of all, what is this, acoustic guitar idol? What a snoozefest. 5 out of the first 5 performances were safe and all too similar. If I were going to vote, I'd vote for Todrick tonight simply for waking me up and not being boring as poop.

- Can Ellen retire "adorable," Kara retire "honest," and Simon retire "a moment," please? (I'd ask Randy to retire "pitchy" but based on the last... every episode, he won't get the memo.)

- Andrew's problem is that with all the harping about "Straight Up," I think he thinks the judges just want to hear him strip down female pop songs. The problem is that this only really works on Idol when it's either surprising, epic, or brings something totally worthwhile and new to the song. When Cook did "Hello," he made it current and edgy. When he did "Always Be My Baby," it built immensely (the violins!) and created something haunting from a pop song. When Kris did "Heartless," it came out of left field and ingested soul into a song that was formerly autotuned and robotic. Andrew just thinks all he has to do is gender bend and play his guitar, but it's like he isn't even trying to be creative with it. I wish the judges could articulate this better; instead they come off as hypocrites by telling him to do other things and then do the same thing they formerly liked from him and then that it didn't work for some reason.

- I'm pretty sure after Ellen had a (somewhat sweet, genuine) moment with Tim Urban, Kara started planning that crying stunt to get the attention back on her. Hate. Kara. A. Lot.

- Speaking of Kara hate, thank God Simon laid the smackdown. Even though he's just as guilty of shoddy advice as she is, that whole "You didn't sing from the heart, what do you know about this song" is crapola and way too literal. Allison Iraheta didn't know anything about love when she rocked "Alone" in the semis last year. Personal connection means nothing if you can sing a song really well in an interesting way. Aaron's problem is that HE SUCKED TONIGHT.

Ugh, so frustrated, and I actually have NO idea who is going home besides knowing that Big Mike is safe. Isn't that odd for this stage?

I don't think Aaron's as safe as you think. Only Andrew was worse than him, I thought.

Ian, i really don't think much after last night lol I made a wild guess that Aaron has the mom vote locked up. if he goes home...no big shocker! Like Pete said....Big Mike is all that is safe!

Maybe Alex is safer than I thought too. Which would be fine with me.....i love the mullet!!

Mike, I can't believe you don't know the song 'This Woman's Work' By Kate Bush. It is from the best scene ever in the movie She's having a Baby with Kevin Bacon. It is really different. You can YouTube the scene. Awesome!

Missed half the show because of Modern Family/Criminal Minds. Doesn't appear that I missed much!

Well, Laura, I know that now! LOL Every crying woman last night let me know today about that movie and that song. I'm sorry, but I never went out of my way to see that one! lol

Modern Family was definitely worth watching over this trainwreck!