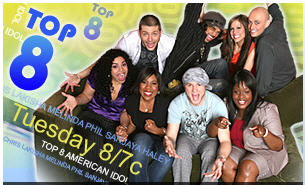 Okay, my goal tonight is to not complain about the show one time! I will just be completely positive with my critiques and very honest in stating how much I love this show and will never tire of it! Yeah, I'm creative and what-not, but there's no way I can do that! Especially tonight! Wow, what a disaster of a night! In fact, I'm starting to wonder why I even gave people hope on the top 12 night, that I might actually enjoy this season! But I can only go on so much about how bad this year's crop is, so I'll give it a rest (for now!). I'd say the only redeeming quality of tonight's episode was watching J-Lo (Jennifer Lopez to you folks not keeping up with the lingo these days!) pretend that she cared and that these kids actually have a chance in the music biz! That was a good time. Plus she was entertaining and it actually looked like she TRIED to give them constructive criticism unlike the "shake hands/hug each of the contestants and pretend to give criticism just so we can get our boost in album sales" segments we've seen this season. You can always tell when the artists actually spend time with them. (not that it did any good!)

More good news before we move onto the reviews! Kelly Clarkson's new single "Never Again" is debuting Friday April 13th! So turn on your radios or tune into your myspaces! Or you can just wait until April 25th when she performs it on the possibly 2 hour results show for the "Idol Gives Back" celebration. We also found out Rascal Flatts, Annie Lennox, Il Divo (Simon Cowell's creation), Earth/Wind/&Fire (ugh), and Josh Groban will be present for the Idol Gives Back Results Show. I mean...wow....who comes up with a playlist like this?! Didn't they learn their lesson having Earth, Wind and Fire on the show? That is NEVER a good idea! I'll give them a break on Rascal Flatts and Annie Lennox though. They're not too bad.

Okay okay...we've put it off long enough (i wish i could even longer!) But the cast of DRIVE is getting impatient waiting in the front row of the auditorium for my review (nice plug FOX. you are never shameless about your cross-promotions!) Here's how the night went down:

Wow, finally done! Now onto the fun part. I'm 2 for 4 on eliminations and have 1 perfect bottom 3 under my belt. I'm not going for any records tonight. It's really anyone's guess again. I'll see what I can do!

Who should be safe: Melinda, Jordin, Blake, Chris
Who is off in his own world for now?: Sanjaya

Well, that's all I have for tonight. Sorry if I'm annoying anyone with all of my negativity this season. But I just can't find anything to get excited about! How is everyone else doing out there? Feel free to let me know your thoughts as always! And see you tomorrow for the results!

I'm sure Chris will be safe, but I thought he was terrible tonight. I did find it hysterical when he popped his collar when he sang about being cool! lol

Last night was horrible!! The only good performance was Blake. I was very bored and zipped through most of the performances after 30 seconds.