Hello American Idol fanatics!  Welcome to Carole King night!  I know, we all dreaded it when the name was mentioned.  Don't get me wrong, she has written some amazing songs over a 50 year career but a whole night of her songs?  Yikes, that's a tall order.  The night didn't turn out to be too bad in the end though.  Not sure if all the kiddies out there will have loved it but it was an enjoyable night of music for me.  Of course, not without some low points!  So there are 6 contestants left and if you followed the discussions in the comments last week, you'll know that most of the people reading/commenting are are on the same page with who we think the frontrunners are.  So, it's just a matter of trimming the fat at this point.  Granted, there may still be a few shockers along the way, but I personally don't believe it's going to happen this week.  And hey, if there's any week where I can feel confident about my picks, it's the week after I throw a perfect game with a perfect bottom 3 call and elimination pick of Stefano!!   Seriously though, that's all I'll brag about it.  It wasn't that tough to call last week!   Anyway, let's get into the recap! 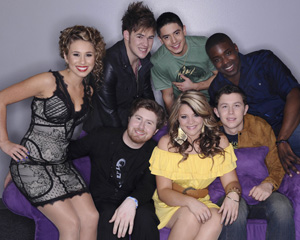 Hello American Idol watchers!  We're back for the top 7 performances.  The remaining contestants "soothed" our ears with the sounds of the 21st Century (and...maybe one cheated a bit with that rule).  And don't worry, even though we only have 7 contestants left, they found many ways to keep the show at an hour and a half, instead of giving us 30 extra minutes of our lives to enjoy say...I don't know a Flyers playoff game or ABC comedies!  I guess FOX is content with hogging 2.5 hours of its week with the ratings hog.  Seriously though, they better not extend it to 2 hours next week and give the contestants 2 songs each already!

Anyway, the night wasn't too bad.  Everyone was pretty much performing at the top of their game.  If not with their voices, then they had their "Game Faces" on.  Getting votes by winking at cameras or kissing judges you name it!  So, in the end, who goes home tomorrow?  I have my thoughts, that doesn't mean they'll be right but stick around and you can see my thought process in motion! 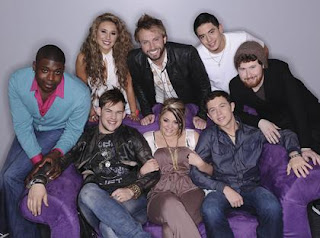 Hello American Idol fandom!  Well, it has been a week since Pia's ousting.  Is everyone over it?  I thought I was.  I even bought into Nigel Lythgoe telling America that he wasn't surprised by the ousting because he has seen the results week after week.  He knew Pia wasn't resonating with America.  Well, I'm sure the lack of personality helped, but I think there was a bit of "America assumed she was safe" going on.  And we can't forget the skewed voting system and "nice" judges that we all discussed last week either.   So, that was before the show that I thought I was over it.  Now, as I sit here after the show I can't help think that it is sorely missing someone with a WOW factor.  No one can deny her amazing vocals.  It explains why Interscope already nabbed her up with a record deal.  I couldn't help but roll my eyes and throw my hands in the air questioning the contestants and the judges on their song choices.  There were a couple stand-outs I guess but nothing that would make me run out and buy their albums.  So with that said, I'm already looking forward to tomorrow night when a TRUE Idol can take the stage and show them how it's done.  Kelly Clarkson will no doubt be singing her duet with Jason Aldean at the results show "Don't You Wanna Stay".  Anyway, I guess we have to pick someone to go home so I'll see what I can do.  But, just like what happened in the most recent seasons for me, I honestly don't care.  Bring on Movie Night and inexplicably more Will.I.Am!!!  (And go see RIO this weekend!)

It figures, once I write off writing results show recaps, the most ridiculous results show in Idol History has to happen!  Yes, we have had shockers before but they have come in the top 5 or top 4 when a huge favorite to win is ousted.  But never.....NEVER has the truly best singer in the competition with the most commercial appeal get ousted in the top 9.  NEVER!  Yes, I had her pegged for the top 2, top 3 at least.  And she is out of here.  It's one of those eliminations that make me wonder again "why is this show worth watching?"  I just don't have an answer for you guys yet.  But, I do have a pretty solid theory on what the problem is.  And if you stay tuned after the jump, I'll get right into it.  Ladies and gentlemen, click on to see our ousted contestant.

Hello Idol fanatics and welcome back to another week of amateur singing dissection!  So it seems like some of the contestants didn't get the memo that this was "ROCK N' ROLL" WEEK!   Yes yes, I know that some of the best known ballads come from rock artists but COME ON!!!  I'm not saying that all of those performances were necessarily bad, they just didn't really fit with the week's theme in my opinion.  Some shined, some were just okay.  But I think I have this week's bottom 3 pegged (or at least who it probably SHOULD be).

Before we get to the recap let me just rant about a few things.   I said it after the results show last week (in the comments of last week's recap), what is up with all of the Will.I.am love on Idol?   First of all, it's ROCK N' ROLL week!  Don't even try to pass off that Black Eyed Peas crap music as Rock!  (Mazel Tov!)  Maybe Will knows something about being a performer, but the dude can barely sing, why has he been showcased on American Idol for 3 episodes so far?  Makes no sense whatsoever to me!    Gripe #2 - I think we have known this was the case for weeks now, but I finally need to raise it as an issue.  While entertaining, the judges are bringing absolutely NO VALUE to the table.  They are a group of praisers.  Even Randy when trying to keep it real, still can't just flat out say when something didn't work.  So, we are left to our own devices to weed out who really wasn't good.

Hey, I'm more than up for the job!  And the best part?  Simon can't steal my lines before I write them on this blog!   So here we go folks!  Let's find a contestant to give the boot!