Hello Idolists! You'll have to excuse me if I'm a little brief and a smidge bitter tonight. Them crazy Flyboys have gotten themself in a pickle tonight going down 0-3 to the Pittsburgh Penguins. I think we all kinda knew it might happen, but now it DEFINITELY happened! I got my Idol fix during the intermission breaks. And well, those kids didn't do too much to impress me either. Sure, you'd think the ARCHULETA SAGA would be enough to keep me tuned in! I'm sure you all heard about Jeff Archuleta's (David's Dad) banishment from backstage. There have been reports of his over-bearingness all season long. But the straw breaking the camel's back apparently was ol' Archie changing the lyrics to Sean Kingston's version of Stand By Me (or something like that...i dunno! I don't listen to that crazy dude!) Funny though, since I commented last week wondering why on earth Davie was singing about "Beautiful Girls" or whatever! Anyway here's Nigel Lythgoe's response. It's all about being fair to Cook and Syesha right? Suuuuuuuure!!! So, did the no-Dad thing help or hurt Archie? Well, in the scheme of things...I think he churned out the same fluff as he normally does. Well, he also attempted to mimic a singer close to his own age for the song he chose himself.
No sense in delaying, let's get to the reviews! The 3 finalists went to their respective homes (which I'm sure we'll get more details in the results show Wednesday) this week. For their Song choices. Song 1 - Judge's Pick, Song 2 - Idol's Pick, Song 3 - Producer's Pick. Let's see what went down!
1.) David Archuleta 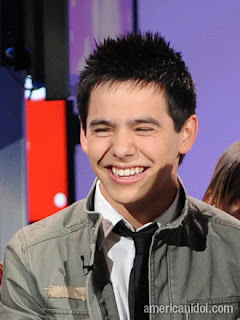 "Scaring the competition with my Grin"
Paula's Pick: "And So It Goes" - Billy Joel
Archacheeze Whiz's Pick: "With You" - Chris Brown
Producer's Pick: "Longer" - Don Fogelberg

Well, I can't lie. I'm a huge Billy Joel fan. So when Paula picked this for ol' Archie, I was a little fired up! But after all of Billy's drunk driving accidents and alimony payments, I'm sure he could use a boost in royalties! It wasn't too bad, but nothing spectacular. In addition to the "L" speech impediment I pointed out last week, I'd like to add to this his "HEAD NOD" (maybe more of a head "BOB") when he's singing meaningful lyrics. I believe he does this to convey to the audience how truly serious he is when he sings those words! Ahhh good times. Now when he tried to sing fellow 17 year old (well he could be older now..i dunno) Chris Brown's "With You" it was refreshing to hear him doing something from this century. But I couldn't stop thinking of him bouncing up and down singing that dreadful "You're the Voice" tune from several weeks back. Add on top of that him actually using the word "BOO" for a girl? Yeaaaah doesn't work. Song 3 was the producers filling in for dear old Daddy Archie by picking him a song from the 1800's. (yes obviuously being sarcastic, it was really from the Mesozoic Era!) I love that Simon took on some of my adjectives for ArchaCrapa Muuuuuzak. GOOEY!!!! Get out that melted Cheese folks! Oh, and what about the see through paisley powder blue shirt he was sporting? And the plaid pants he had on earlier? That was crazy stuff. I can't help but make fun of the guy, but he's obviously a lock to make the finals next week. But to win it? I'm still sticking by my boy! 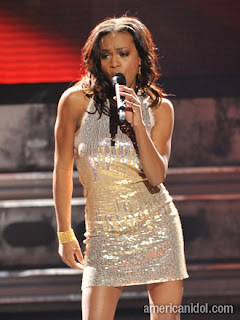 Song 1? I just expected more from an Alicia Keys tune. Randy seemed to set her up for disaster. I know Syesha has a new-found emotional theatrical side, but living up to Alicia Keys? Probably not gonna happen. She sang it well, but she should've broken it down! Song 2? This was Syesha's "BROADWAY AUDITION" song. Brought out the chair and just started doing her thing. I think she knows she has no shot of winning, so she wants to solidify her case for doing what she loves. The judges said she failed at her chance of doing a tune that would show her off as a recording artist. And you know what? She's pretty much failed to do that throughout the competition. But as a Theater Girl? She's got it! Song 3? Disaster. The Happy Feet Song? I can't describe it better than Simon did when he said it's a song about penguins! Just didn't work for what Syesha has been doing lately. Bottom line, she has no chance to make the finale. Nor did we think she would! I'd be really shocked if she made it there against either David. 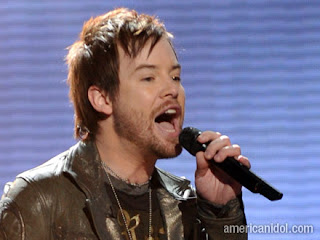 "What tune can I 'modernize' this week?"

Simon's Pick: "First Time I Ever Saw Your Face" - Roberta Flack
Cook's Pick: "Dare You to Move" - Switchfoot
Producer's Pick: "I Don't Want to Miss a Thing" - Diane Warren (made famous by Aerosmith)

What else is there to say? Season 7 won't be remembered for the strongest voices to come out of American Idol. It may not be remembered for anything really. But who deserves to win this year? I still say it's David Cook. He has a raw emotion when he performs, he has a distinct voice. He has been the most original this season. He made Simon's song choice sound marketable. It was really good. Chills compared to Artichoke and Syesha's song #1's. Sure, after awhile, you know what you're gonna get from David Cook on this show. But it still sounds better than anything else, in my opinion, on the show. Song 2? Bad arrangement of a good song. I agree with Paula that it seemed to just get going and then it was over. Song 3? Great performance of an overplayed song! I just don't know what else to say about Cook that I haven't already said! I think I'll save my praises for next Tuesday as he goes head to head with Kid-Archacrap and battle it out singing the dreaded Idol Song. I'm also going to guess that if they get to pick performances from earlier this season, Archie will sing "Imagine" and Cook will sing "Always Be My Baby." But we'll see! I'm getting into my results show recap a little too early! We first need to see if this is how it will go down!

So it's no surprise what I'm going with this week. And it seems the weeks that I don't hesitate to make my choice are the ones I get right! So here goes nothing on 2 weeks straight!

Bottom 2: Not applicable
Elimination Pick: Syesha Mercado - Great run Syesha, but someone has to go home. That someone is definitely you!

What do you think kids? Is Wednesday night a foregone conclusion this week? Will you watch anyway? Does Archie still have a shot to win this thing? Is Simon Cowell hoping for a Cook victory based on his comments tonight? COMMENT AWAY! And please, pray for a miracle with the Philadelphia Flyers! See you after the results!

Judging by DialIdol it looks like Syesha's finally gone and that David Cook has way more support than the other two. I think a victory for Cook is pretty much in the bag. I hope so, because he deserves to win more than the other two.

I think Archuletta is absolutely the most boring performer. I would rather see sparkly Syesha go the final 2.

I certainly wish life was that fair! lol