The American Idol Winner is Revealed! And Being an Underdog is IN!

My friends, being wrong never felt so good!  I 2nd guessed my decision ever since I pushed submit on the blog post declaring the high pitched crooner the inevitable winner of American Idol 2009.  But I had this sneaky suspicion of an underdog defeat.  But what a story it made!   A man pulled from obscurity with no hype from the American Idol machine, and a large hill to climb entering the top 13 grows throughout the competition and pulls off the unthinkable.   That is what American Idol is all about folks.  And I will proudly go to 6 out of 8 All Time for a happy ending like this.  My friends, meet your new AMERICAN IDOL! 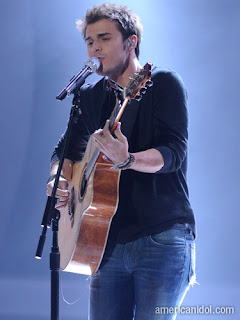 American Idol Season 8 Winner: Kris Allen
My Pick: Adam Lambert
Dialidol.com Pick (by a decimal!): Kris Allen
Whew, doesn't get much better than that folks!  Congratulations Kris!  And of course, job well done to Adam to keeping his legions of fans supporting him throughout the run.  I'm sure they will support him beyond this show.  And I think American Idol did a good job putting Adam with bands tonight that show what he really is capable of in live performances.   But we'll get to that in a second.   KRIS won American Idol!  Crazy stuff folks.  And good job to all of you out there that had the guts to call it without second guessing yourselves.   I think if Allison was in his place, I wouldn't have thought twice about picking her just because I thought she was fantastic all season!   Anyway, not much else to say about the results.  Let's do the highlights and lowlights one more time for the season!
Highlights:
Lowlights:
All-in-All a decent 2 hour finale.  But I'm glad it's over!   It has been another long and torturous ride along the American Idol rollercoaster.   The season was rough-going like last season but also like last season, we ended on a high note!  And that is always a cause worth celebrating.   I apologize that I couldn't successfully pick the winner this year for you guys, but I'm sure you will let it slide.   I am happy that I got to expand my audience further this year with the Gather.com community.  Thanks everyone for reading and enjoying my endless rants.  Thanks to the loyal commenters who have shared their thoughts every week as well as the occasional posters for all of your great commentary all season.  I will now go into hibernation for a few months and prepare for the onslaught to start all over again next year!   One more congratulations to Kris Allen for the win!
Hope you enjoyed my ramblings and I will see you next year!
This blog can also be read and discussed on Gather.com Come check it out and throw some votes my way if you have spare time!
Posted by Mike V. at 10:10 PM

You and I seem to agree on most of the highlights/lowlights. I will say though, that I enjoyed Michael, Megan and Martin. The song itself was fun, and Michael doesn't seem so bad when he's singing with the awful Megan.

A video of Kara's slipups would've been hilarious!

Thanks for blogging this season, Mike! It's been a pleasure reading!

I just couldn't get past the whole BIZARRE FACTOR of the Michael/Megan/Martin thing. And Megan STILL sounded awful! lol

It's been my pleasure Ian. Thanks for contributing your thoughts every week and good call with the Kris pick!

I also know that Kris will won in Season 8.in this no doubt kris won idol this year.if you want to get more information about American Idol TV Show then click here and also you can Download American Idol Episodes from this site. Good site for all popular tv shows.

Thanks karan. This is my favorite tv show.Before this I had to Download American Idol Episodes from download-tvshows.com. But from now onwards i can also download this tv show through your link. Thanks very much again.

Hello !.
might , perhaps curious to know how one can reach 2000 per day of income .
There is no initial capital needed You may commense to get income with as small sum of money as 20-100 dollars.

AimTrust is what you haven`t ever dreamt of such a chance to become rich
The firm incorporates an offshore structure with advanced asset management technologies in production and delivery of pipes for oil and gas.

Its head office is in Panama with affiliates everywhere: In USA, Canada, Cyprus.
Do you want to become really rich in short time?
That`s your chance That`s what you wish in the long run!

I`m happy and lucky, I started to get real money with the help of this company,
and I invite you to do the same. It`s all about how to choose a proper partner who uses your savings in a right way - that`s it!.
I make 2G daily, and my first deposit was 1 grand only!
It`s easy to start , just click this link http://zuvowodot.envy.nu/nemymif.html
and lucky you`re! Let`s take this option together to get rid of nastiness of the life

sorry guys, my blogs are getting spammed in the comments! I had to add the word verification for future comments. Hope it isn't too much of an inconvenience!

American Idol is really a superb show. I like it very much. Its my favorite show actually.

Hello friends..this is an awesome show where we get the real talent. And this is the only place where new singers can show their real talent. American Idol Episodes is one of my favorite show. I like it very much.

American Idol top 24 contetents has been selected. Try to watch it by using the link here.