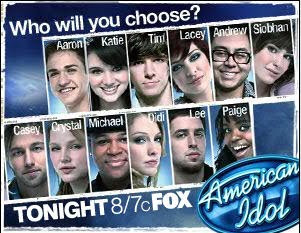 Hello American Idol fanatics and welcome!  We are back into the TOP 12 Finals!  Back to the Big Stage!  Back to the weird introduction of the judges walking to their seats.  Back to contestants getting eaten alive by the big band, the big stage and all of the crazy lights.   Oh yes, we are back in business.  But there is one slight problem.  Many out there disagree with the 12 people that are standing before us.  There were some upsets in last week's elimination, none worse than Lilly Scott's departure.  No fear, Crystal Bowersox wore a memento in her hair in remembrance of one of the fallen talents.  This competition is boiling down to probably 3 contestants right now.  And, personally, I only thought one of them brought the goods tonight.  But we'll get to that.  Maybe I'm just showing my favoritism!


Let's get into things here.  12 contestants, 1 must go home.  3 will be pushed down to that bottom 3.  I will attempt to pick them all!  Rollings Stones was the choice for "what classic band can we butcher on this show next?"   Let's see how they did!


So there was no one that was just flat out awful this week, so it makes it tough to figure out who is going to get the boot!  It's even tough to figure out who will get the SCARE of being kicked off!   But, I'm always up for taking a chance!  Let's do some process of elimination!
Who is safe?  Crystal, Michael, Siobhan, Casey
Who got slammed by Judges?  Tim
Decent Performances?  Paige, Aaron, Lee, Didi, Katie
Okay Performance? Andrew
Who did I forget?  Lacey
Bottom 3 Picks: Tim Urban, Lacey Brown, Didi Benami      Bonus Pick: Andrew Garcia
Elimination Pick: Lacey Brown  -   Lacey, you have this going for you.  I already think you're better than Megan Joy from last year (who beat you into the Top 32), but I also didn't think she should make the top 12!

Yep, my guess is that people may forget about Lacey after this week.  But just look at how many people had decent but not GREAT performances.  It really could be anyone!   I've made my pick.  What's yours?  We'll find out tomorrow who is right!  I hear David Cook is stopping by the results show for a performance.  Always a treat!   Hope you enjoyed my ramblings as always and I'll see you after the Wednesday results show!


Ending Credits
Please Click to Support!
Check out my other Blogs:
LOST - http://www.lostaddictsblog.com/ (blog is back and on fire!)
FlashForward - http://www.flashforwardaddicts.com/ (back March 18th)
Posted by Mike V. at 11:50 PM