Hello American Idol fanatics!  Well, I can't even pretend to say that I was close to predicting this one.  Yes, I had 2 of the bottom 3 picked correctly, but the VOTED OFF contestant?  Nope.  He wasn't even on my radar.  Granted, he was saved by the judges this week so one could say my elimination pick streak is still alive.  It would have a giant asterisks next to it an any record books though!   So, the only thing we really need to thankfully bid adieu to is the dreaded Judges' Save itself!  But let's give a hearty hand to the Voted Off Contestant who sang to Save his elimination for another day! 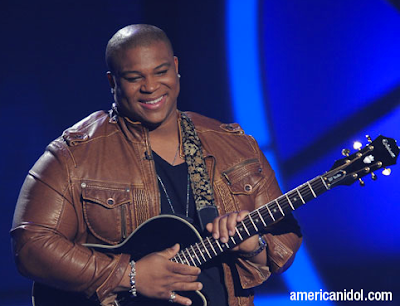 Well, that was kind of crazy, right?  I guess it makes sense with the judges coming down on Michael and his "Broadway" sound Tuesday night.  Or maybe a lot of people just assumed he'd be safe.  I never envisioned Michael winning the whole thing, but he's just too fun to say goodbye to just yet.  Especially when Tim Urban is still in the competition.  Granted, I thought Tim did decent on Tuesday, but come on...Michael?    Anyway, not really much else to discuss since no one went home!  So let's get to the High's and low's!


Highlights
Lowlights
And that's all I got folks.  I already went on a rant in my Top 9 recap about Adam Lambert being next week's mentor.  Don't get me started again!  I'm sure I'll have a couple more choice words to say about it next Tuesday so tune back in!   Hope you enjoyed my ramblings and I'll see you next week!

You knew there was no way they'd leave the Judges' Save on the table. If they had to use it I'm glad they got it out of the way now instead of dragging out the drama every week. I hope Tim has it in him to get more votes than at least two contestants next week!

Random thoughts:
Doesn't "Artichoke' look like he'd be great as playing the teenage Spock in the next Star Trek movie/series?

How many times did Ryan allude to the "shocking" results??? His silly games with the contestants has grown old and so has this one hour variety special of a show. Here's some variety for you: Have all the contestants stand up, tell Big Mike he's gone and it's all over in 5 minutes! TOPS!

The judges save on Big Mike will probably come back to haunt them...doesn't it always? What they have done though is tell Big Mike that he was safe but his wife had to go! A-N-N-O-Y-I-N-G!

Let's hope that Idol really gets shook up next week as we see Sibohan and Lee sent home!

Boo on the saving of big Mike. I thought that was so bad. Someone like Lee, Chrystal or Casey may need it. Ugh... just another reason why this season is bad!

I didn't read your blog last season, so not sure what you have against Adam Lambert. I was never a regular Idol watcher before last season (got married, she watches the show, etc...) But I started to look forward to it each week just to see what Adam was going to do! His act may not be to everyone's liking, but you have to admit the guy can sing, and is very creative. I think he's a great choice as mentor.

Regarding this week's show -- I was both surprised and unsurprised to find out that Mike was the least vote getter. While he can really sing, I feel like singers like him are dime a dozen out there. There is not much unique about him. Then there is the personality. He really straddles the line between confident and cocky. It can rub people the wrong way. I expected it would catch up with him eventually -- but not at Top 9. I can see why the judges used the save, but it also makes me nervous that it is gone in case there is a snafu and somehow a Crystal or a Lee end up as the least vote getter prematurely. In that case, IMO, it has been wasted on Mike.

ps. Count me among those pulling for Tim. Not really to win, but even though he doesn't have the most talent, I find him more likable than a Siobahn, Aaron, or Katie. Mike too, for that matter.

That's what I'm saying too Ian...just get it out of the way. I actually would really hate it if the person that wins Idol had to be saved by the judges...so Laura, in response to your comment...I'm glad that they wouldn't use it on Crystal if she ends up needing it one week. Yeah I'd be upset that she got voted off...but I wouldn't want her to get voted off, get saved and then people realize they need to vote for her to keep her on the show.

Now...maybe that will happen with michael...but I dunno...I don't even like the concept of the SAVE so I'm glad they got rid of it! LOL

Jackson - teenage SPOCK for Artichoke...LOVE IT! LOL That kid is just so goofy...I think he and Siobhan need to meet up and go to the Land of Weird together!

As for Katie not knowing about Adam...who knows?? Maybe she doesn't surf the WEB lol

Totally agree that the HOUR ELIMINATION SHOW is super old. It is pretty much one of the reasons I'm contemplating not returning to blogging next season. Well, that and Simon...and I'm just tired of tying up my Tuesday, Wednesday and sometimes Thursday nights for a Reality show! LOL

Jase - I have always admitted he could sing. (Adam Lambert)...but there was plenty not to like. The high screechy notes every performance (see Siobhan and why I don't like her)....the Bubbly gum ACT he put on for America while images of his past/real life slowly surfaced. I mean...this dude is into some weird kinky stuff cross-dressing stuff!! Whenever I'd look for pictures for the blog last year...I'd run into stuff on Google Images I'd rather not see. And THAT is the Adam I saw show up at the American Music Awards. The version that drove 50% of the audience he acquired on American Idol...AWAY. But not even all of that is why I don't like him as a mentor. I think that an IDOL winner should be first choice for a mentor...so for that, it's an insult to Kris Allen. But I think having an accomplished winner would be the best choice...so that would be Kelly or Carrie. Maybe they didn't have time for it. But I see bringing Adam on here more as Damage Control to his career....trying to win back some of the fans he lost. Maybe I'm off-based...maybe I don't care! LOL It's how i feel! (the i don't care part...i really don't. it's just a reality TV show! LOL)

I am shocked about Mike too being the lowest vote getter. But as I mentioned above...i'm glad it's gone...I like the idea that there are no safety nets...these contestants need to go out there and perform their best every week. If it's not good enough...or if america FORGETS to vote? that's how it goes. these contestants have to make america WANT to vote. That's the true makings of a star!

Hey MikeV...hate to bring this up, but here's an interesting article I found and would love to hear your comments about it:

Jackson - at this point nothing would surprise me! lol Of course, I never really thought Idol has been totally honest with us anyway with the voting process. It's all too vague and can be manipulated any way they want to!

But, I'm way past conspiracy theories with this show. If the girlies want to vote for Tim Urban...so be it! It is interesting that it's been awhile since a girl was in the final 2. Not to mention another demographic which has been missing since season 3. But you could also look at the fact that it's been mostly SOUTHERNERS that have won Idol too. Jordin Sparks was an exception in a lousy season. I'm sure the SOUTH rose against Adam Lambert in favor of Kris Allen as well.

Lots of conspiracy theories to go around.

Oh well, I'm just gonna try to stomach my way through the rest of this season....and then I think I'm retiring! LOL We'll see!