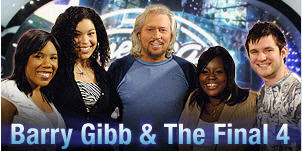 There really is nothing like the sweet high pitch sounds of Barry Gibb is there? Ahhh yes, seems like the perfect fit for Idol to separate the pretenders from the real deals. The only problem is, we're kinda missing the "Real Deal" this season! Sure, I have my favorite and others have their favorites. But no one is really fitting that bill. And tonight kinda proved it. Since the departure of Sanjaya, things have gone down exactly as they should. We have the 4 contestants we're supposed to have at this point in the show. But do you recall a season where there still wasn't SOME surprise left to happen after the WORST contestant leaves? Usually a front runner gets a surprise ousting. Remember Chris Daughtry last season? He had an early exit around this time. Latoya London in season 3? She was supposed to duke it out with Fantasia and hopefully beat her. She left early too due to personality problems. Tamyra Gray? She was supposed to battle Kelly Clarkson for the coveted 1st American Idol crown. She lost her voice during the final 4 performances and stuck us with Philly Local Fro Boy Justin and Awful Karaoke wannabe Nikki. I have a disturbing feeling tonight that something like this may happen again this year...especially with some mediocre performances. But I probably won't be brave enough to actually pick him or her to leave us tomorrow night. Who do I think the victim might be? Oh you know me better than that....I'll explain in my recap below!

2 Songs Each from the Barry Gibb/Bee Gees Collection mentored by the great dog whistler himself! Here's what went down tonight! 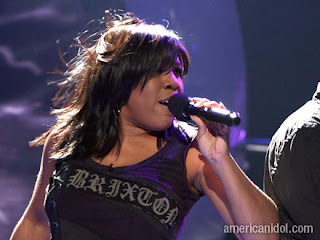 Song 1: Love you Inside and Out
Song 2: How Can You Mend a Broken Heart

It's tough to put into words what we think about Melinda Doolittle. We all know the girl can sing. We've said it every week in this blog. We all know she's a very humble person. We've said it every week in this blog. Well, if there's anyone who can sum it up best....we must turn to Paula Abdul. "You are BRILLIANT TECHNICIAN!" Okay, well let me translate for her as Simon always needs to. Melinda will always hit all of the right notes, she will sing the hell out of her songs, but she will always leave the audience expecting MORE from her performances. Paula again states that she's still waiting for Melinda to throw down and SURPRISE the audience. Unfortunately for Melinda, she has reverted back to her comfort zone. A step back from last week and the weeks prior. Again she appeared to be the unmarketable background singer that came into this competition. I'm not going to keep you guessing who I was talking about above that could make a surprise exit. I was referring to Melinda. However, Simon does hate to be wrong doesn't he? And he said that the 2nd half of her 2nd song will be what people remember and will be enough to get her into the semi-finals (didn't realize we called the top 3 the semi-finals!) I'll keep my fingers crossed for Miss Doolittle. 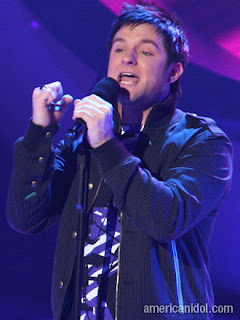 Song 1: You Should Be Dancin'
Song 2: This Is Where I Came In

1 Week later after the Beat Box returned, I'm begging the Beat Box to go away again! I am definitely an individual who likes to keep jokes running long after their expiration date until someone says "Dude, you killed it" But come on Blake! If you Beat Box on every song....it is no longer unique....it is no longer shocking...it's expected...and it's YAWN inducing, Eye roll inspiring! (I'm also very good at rolling my eyes as many have pointed out to me!) And the beat boxing this week wasn't even that good! He kinda just forced it into the songs...he HUMMED the horn instrumental during "Dancin." And that 2nd song? What on earth was that? Even Barry said the song was a dud! But no...Blake has to be different! Blake has to be cool! No Blake....BLAKE has to be DORK! Not a good week for the Blakester. But I think we can all agree that we hope he sticks around over KiKi. It's really a tough call this week! 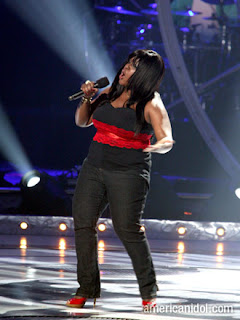 Well LaKisha brought out the big guns again this week. And yes, I AM referring to her upper torso. I mean seriously! PUT THOSE THINGS AWAY! Well, she didn't bring them out until Song 2. Song 1, we got to be distracted by the Center Background Singer sporting some kind of Dominatrix Attire. This is a Family show, right? Anyway, LaKisha showed off her best strutting abilities during Staying Alive. But the song overall just didn't really work. She slowed down the tempo and screeched away. And I think the last note of her 2nd song pretty much said it all as she gasped for air and totally missed the note. Randy and Paula already had their critiques prepared before hearing that last note and had to change it up a little bit with the "well don't worry about the last note...it was still better than the last!" type of comments. If we are going by our Top 12 Ranking....then LaKisha is the next on the list to go. But I just don't recall a season when things were THAT easy! Perhaps my accurate double elimination picks last week are going to my head and I'm over-thinking this one! 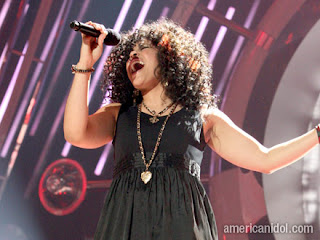 Song 1: To Love Somebody
Song 2: Woman In Love

And then there is Jordin! Well, I'm going to guess after Jordin's rough week last week, the Idol producers strategically gave her the coveted LAST performance spot of the night. And if "To Love Somebody" was her final song, it would've been a perfect strategy! But still, I think more often than not, people are more willing to remember who went last than who went first. Not that any of this matters. Jordin clearly had the best night of the bunch. Song 2 had some pitch problems....Simon thought she was a bit old fashioned for a 17 year old. But my take is....I could still see her commercial appeal shining through that slow, sappy song and the evening gown. And why harp on the 2nd song? Her performance of "To Love Somebody" was the evening's best performance. Jordin looked the part of an Idol winner and sang wonderfully. Yes, this contradicts my early statements in this blog that NO one fits the part, I know! But it's all relative people! Jordin is BACK and the only one I think that's safe tonight.

Well I've been brushing up on my Idol history, reading some old blogs from last year. Chris Daughtry was a Final Four victim last season...but he also fell into the bottom 3 a couple weeks prior when Ace was booted out of the competition. Melinda and Jordin have never seen the bottom 3 or 2. Lakisha and Blake both have. But Dialidol.com has also had problems predicting rank this year due to the voting being so close (either that or the website is just a fraud as I initially suspected last season!) Bottom line is...I don't have enough guts to pick Melinda to go home. But just remember all of my hesitation about it tomorrow night when we see who DOES go home!

Bottom 2: Blake Lewis, LaKisha Jones Wildcard: Melinda Doolittle Bonus Wildcard: duh!
Eliminated: LaKisha Jones - You should be athshamed of yourself for stealing Chris Sthligh's championed LISP trademark! But due to you being around longer, you were the benefactor of all of my comedy! Now, it'ths time to go!

Well, once again, this pick is just what I WANT to happen and what SHOULD happen. But America votes in all crazy kinds of ways. And Idol has been without a TRUE shocking elimination this season. So I just would be prepared for the worst! What do you guys think? Am I wuss for backing out of my Melinda guess? Who do you think is going home?
Hope you enjoyed my ramblings as always, and I'll see you tomorrow night for the results!
Posted by Mike V. at 7:45 PM

was it me or did Kiki completely ignore all the advice that Gibb gave her??? she deserves to be tossed....then again so does Blake after last night...and quite frankly what were the producers thinking with disco night???

Last night was horrible! I fast forwarded a lot of it. I will say that the bottom 2 are Melinda and Kiki because all of the Chris and Phil votes are going to Blake. They are the people who don't want one of the girls. Just a guess!!

Yeah I read similar things this morning. Blake should get a boost from the absence of Chris and Phil.

I'm even starting to think the final 2 might be Jordin and Blake. That will be definite if Melinda leaves tonight. If she's safe...then she'll probably rebound enough to make the final 2. But who knows!?

Whatever it is worth, Dialidol has Melinda and LaKisha in the bottom 2 this week. lol

If I hear any beatbox tonite, I swear...if Blake does make the final two I hope he does it straight away, without the ruffles, flourishes and beat-boxing!!!