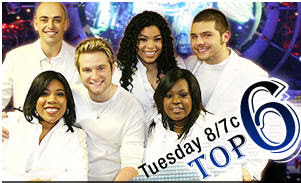 Well call me confused! So many rumors were swirling around this week about the Theme night. I was getting fired up! I heard last week it was Bon Jovi week. Then I read later on that it was ROCK SONGS mentored by Jon Bon Jovi and Richie Sambora. Well kids, it's option 3. BON JOVI songs mentored by Jon Bon Jovi and David Bryan (or however you spell it!) As much as this year's crop of kids aren't up to the task....you still gotta be excited when you know you're going to hear 6 songs you probably grew up listening to and actually like! So, even with some terrible renditions tonight, I might have to go ahead and say that Bon Jovi night trumps Country Night for me! (SORRY SOUTH!) Not in terms of performances...just in terms of my enjoyment of the tunes! And the worst part about it? My favorite season 6'r is in BAD shape after tonight! But we must keep in mind folks...due to the Idol Gives back debacle (a 70 Million dollar and counting debacle!) we have to tally up 2 weeks worth of votes. Have you been pondering this as much as I have since last Wednesday? If you have, then you haven't really been pondering much at all! But we'll get through this together and come up with 2 people to kick off the show. It's not going to be pretty. But, it must be done! Let's get to it! 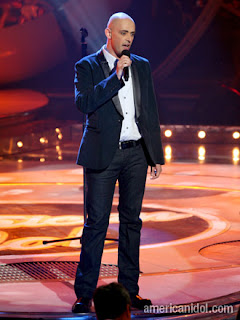 Well Simon is definitely singing a different tune from last week. Last week he says Phil is not in trouble, then all of a sudden he doesn't think it was enough tonight. Maybe he saw some voting tallies from last week? I dunno, but I thought Phil was pretty darn good tonight. I'm not even a fan of the crazy alien. Weird faces, bald head and all...I thought he kinda rocked it. And doing a little pounding of the fists with Randy never hurts! Of course...if he turned it into an explosion like Michael and Andy on "The Office"....there would be no way he'd get eliminated tomorrow!Phil is going to be a tough call. But for now I'm saying he's safe. After we do some math below...I may change my tune. 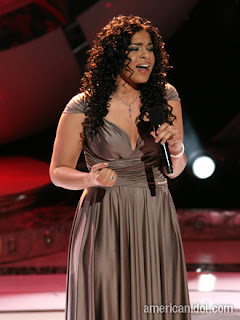 Bon Jovi - "Livin' On a Prayer"
I gotta say, once I heard Jordin was doing "Livin' On a Prayer" (or as the 80's child version of me used to call it "Living on a Prairie") I was a little scared for her. It kinda reminded me of her picking No Doubt's "Hey Baby." Kinda like....if you're a child of the 2000's and you hear about No Doubt - the song you'll know is "Hey Baby" for Bon Jovi? Come on...it's ALWAYS going to be "Living on a Prayer." I just think she should've followed the path Lakisha did and took a shot at one of the Bon Jovi Power ballads. This was just a trainwreck all over. And I'm a little scared for her. I'm not sure what happens when you have the BEST performance on a charity night and the worst performance on the week that follows. But I gotta think that the votes from last week will work in her favor! Here's hoping! 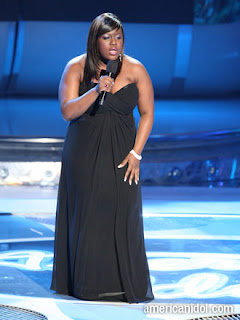 Bon Jovi - "Thith Ain't a Love Thong"
Well, I can't knock KiKi this week. She did her thang. Well...on second thought, of course I can knock her! How about her not finishing her words and breathing properly when she sang lyrics like "I cri-- and i cri-- ev--ri--nigh--dat i di--- for you baaaaaabbbbbbaaaaay" I mean come on! How hard is it for her to take some big breaths and just sing it right?? Other than that...she had one of the better performances of the night. She played it right. Just took a ballad and LaKisha'ized it. I didn't like her last week...she was better this week. Judges seem to think she's safe. Don't get me started on Simon kissing her and then wiping his lip for the next 5 minutes! I'm leaning towards thinking she safe too. BLECH!!! (yep...that's just how i feel) 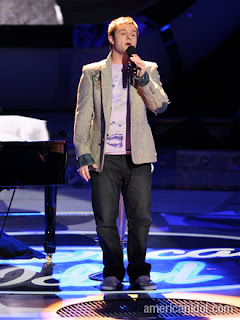 Bon Jovi - "You Give Love a Bad Name"

So, Simon said half will hate it, half will really love it. Are you going to hate me forever if I say I was part of the LATTER group? Okay okay...I won't go that far. But Blake has gone WAY too long without doing some of what got him into this competition in the first place and how he earned his popularity. Yes folks....he brought the BEAT BOX back...starting off with laying the record down...and going crazy. Sure, he didn't sing much...but when he DID sing...it was in tune and convincing. And this is what I had been missing from Blake. His confidence that he actually can sing. It seems that when he lets loose his inner beat boxer....it gives him the confidence he needs to put on a good show. American Idol SINGING sensation? No.....American Idol Entertainer? Yes. He ain't gonna win Idol...but he's definitely going to sell some albums after he gets booted. And I agree with Simon this was his right move and enough to keep him rolling into the final 4. 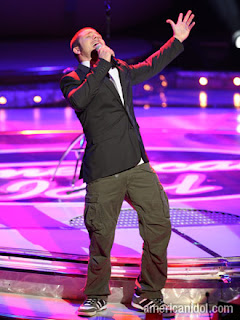 Bon Jovi - "Wanted Dead or Alive"
In one word? HORRIFIC. Chris has definitely run his course in this competition. I thought he was a goner this week. Now I'm absolutely certain he will be making his exit Wednesday night. He even admitted it was risky performing this after Chris Daughtry nailed this in the semi-finals last season (sorry..too hard to find on youtube...he's performed it too many times since then!) Well...I'll admit it...I tuned Mr. Richardson out 2 seconds into his performance and was text messaging away. Every couple seconds I'd look up and just say outloud to the empty house "MAN HE IS AWFUL!" So...if he can't even capture my attention for 2 seconds? He's a goner! (now don't feel sorry for me that I was home alone! I still had my HDTV!)
Melinda Doolittle 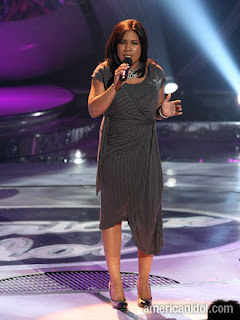 The past 3 weeks, I have been continuously surprised by our "resident pro," as Randy calls her. And it's not her singing...we knew she could sing. It's what she's bringing to the table every week. Her stage presence is getting more confident....her outfits are more 21st century, her hair is finally looking her age, her neckline is remaining visible at least for 10% of the time. Yes folks...I may stretch to say she is ALMOST marketable! There is no doubt, after a string of good performances and the BEST performance tonight...she has just edged out Jordin for the lead again. We have to hope Miss Sparks can survive this bad night (which she even admitted was not a good genre for her) so we can see these two Diva wannabes duke it out in a couple weeks!

Alright...those are the performances. Let's recap my thoughts from last week and then do some analysis on this week...combine....compare, contrast..and come up with our outcasts!
My Picks Last week
Bottom 3: Chris Richardson (I picked to go home), LaKisha Jones, Blake Lewis Wildcard: Phil Stacey Bonus Wildcard: Melinda Doolittle (Meaning Jordin was #1)

Combined Picks for this week

I was doing a lot of thought combining those bottom 3's...trying to figure out how I could put Jordin in there and still keep her safe. But then I thought more about it. The rankings of the contestants has been pretty consistent 1.) Melinda, 2.) Jordin (they rotate every now and then) 3.) Blake 4.) Lakisha 5.) Phil 6.) Chris. So...I'm thinking...with 2 weeks worth of votes for all of the contestants...things even out...and contestants will pretty much end up around where they are ranked. What does this mean? We take our worst 3 people and put them in the bottom 3....and get rid of the bottom 2. Too easy? Maybe....but I would say a final 4 of Lakisha, Blake, Melinda and Jordin makes the most sense ever, wouldn't you? They are the only 4 that people have really been talking about since the top 12 began. Let them have some more time to shine...and rid us of these other fluff players.

That's all I have kids! Less Comedy in this blog and more LOST-like analysis. Hope I didn't lose anyone! I'd love to hear all of your theories on how this interesting results night will pan out. Please COMMENT! And I'll see you tomorrow after the hour results show to see what exactly went down!

Well, I just had to stay up and read it. It is 40 min past bt but I tend to agree with you. However, I do like Blake (Shanna hates him) but I think he has a chance to make it to the final 2 or 3. I - like you hope that Jordin got enough votes last week to keep her safe this week cause she was definitely in the bottom 2 tonight. Later tater.

I said last week that Blake would break out the beat-boxing in full form for this week's performance. He didn't disappoint! I loved it, and had been missing it for the past several weeks. It is what makes him unique to the competition. I hated to see Jordin as such a trainwreck. I hope last week's votes will save her. And, I hate to admit it, but I thought Lakisha was really good tonight. Tomorrow night will be a tough one. I hope you are right...I would like to see Chris and Phil leave.

Nice analysis... I hated to love Phil's Blaze of Glory but it was strong. I firmly believe that Chris is going home (what an idiot to pick Wanted after Daughtry knocked it out of the park last year). My surprise pick is LaKisha. Her lisp has caught up with her... she doesn't hold a card to Jordan or Melinda - one of which will win the whole thing. And, for the record, I enjoyed Blake's performance.

Still like Blake! Did a great job and really sang well. I also enjoyed Melinda this week. She is really turned around in the last few weeks. I think I am the only person who reads this blog who doesn't like Jordin. Something about her rubs me the wrong way. Glad she tanked last night. I think she needed to come down a few notches...

I think I'm the only one who doesn't like Blake! lol