And then all was right with the world again. Just when I start to feel like this girl can do no wrong, she went and got the boot! I should've seen the signs. She had the Sanjaya syndrome going where she just could not be eliminated. And of course Sanjaya left us Top 7 week. Granted, she was better than Sanjaya but one would not have guessed that in top 12 week! Either way she became a Hall of Famer for Bottom 3 appearances this season and finally, she was not able to save herself this time! Yes my friends, dialidol.com is wrong again predicting this one to be safe. Ladies and Gentlemen: The Frequent Flying Horse Lover is gone. 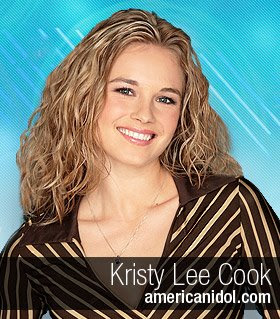 Yes dialidol, even in CYA mode, predicted that KLC might show up in the bottom 3 but was predicted to be safe from elimination. Oh well, I've spent seasons explaining how that site is rarely on the money with their picks! Plus, it's not like I'm one to talk! But I'm not tapping phone lines either to figure out the numbers! Just guessing!

Anyway, I won't really be able to prove this one unless someone could vouch for me, but I totally called how they were going to trick us with their bottom 3 shenanigans tonight. Every year the top 7 elimination show splits our contestants into 2 groups of 3 with one group being the bottom 3. Once they split up Castro and D. Cook, I had the feeling they were going to swap one of them right before they announced the bottom 3. And sure enough, it happened! So while I can't pick an eliminated contestant for the life of me, I have SOMETHING going for me. One disturbing thing that happened was Archuleta being the 7th man out that had to pick which group to stand next to. My problem with this? The last 2 seasons it was Taylor Hicks and Jordin Sparks. But I don't believe in superstitions! (REVISION NOTE: Commenter Ian corrected me on this. It was actually Melinda Doolittle in this role in season 6) I still think David Cook has evolved the most on this show and continues to impress while The Artichoke just continually appears to be more and more uncomfortable on the show, even though he says he's feeling more and more comfortable. And I'm sure he IS having the time of his life. Makes me think they'll do a DIRTY DANCING Theme Night just so he can sing the song before this season is over!

So Andrew Lloyd Weber week next week eh? Yeah, I'm going with "Music of the Night" for Archie. Not that it's an inspirational tune or anything, but I'm sure he really feels that one! But there is a lot of lower register singing in that one so he wouldn't do too well on it. Will be interesting to see what Cook does (finally I can just call him Cook!). Would be cool if they could do more than just Andy's tunes (yeah we're on nickname basis me and the Webster) because Cook could do a mean Roger from Rent! And since they did "Seasons of Love" at Idol Gives Back they must have some musical permissions to do Rent music!

Anyways some other thoughts from the results show:

So that's it, I'm 0-6 now, but my favorite to win it is still alive and in the running. And I don't think anyone was really shocked to see Kristy go. In fact, as it stands right now, it shouldn't be too surprising to see ANYONE go except the 2 Davids. But Syesha should be on deck! And yeah, we're getting into Brooke territory too, unfortunately.

That's all I got folks! What did you think of the eliminations? Are you upset by my losing streak with picking them this year? Do you think I'm nuts to think Cook has a chance over the ARCHIE? And please, I really want to know....is there anyone else out there that can't stand ol' Davey as much as me? I keep hearing from people telling me to give it a rest. Please haters...speak up! See you next week!

I'm a hater speaking up!! The kid drives me insane....I just don't get the appeal. I think his voice is weird, his talk time is always weird...he's just WEIRD!!!

Also, I would like to be the "voucher" and say that he did indeed call the switcheroo with the bottom 3 groups! Lol

I thought Melinda Doolittle was the "7th one out", not Jordin Sparks. I'm pretty sure Taylor was the only winner who ever got the "pick a group" role.

Once again, great recap. The part about "Andy" made me laugh. Could you please pick Brooke to go home next week? I want her to stay.

thanks for vouching for me shanna! You rock as always! Lol

Good call Ian! I looked it up and now remember melinda being in that role last year. My bad! Well maybe I do believe in trends over superstitions then and this is the first sign of things going in David Cook's favor! lol I'm glad I am still entertaining and very funny with the Brooke pick. I think around this time in the competition is when my luck starts changing! At least I hope so!

**sigh**
What does it matter? Michael is out so I am hanging in the office pool by my thumbs.I have to second Ian though..pick Brooke because I'd like to see her stay too!

I did think of something else to say about the results show last night. Did anyone notice they never announced how much money was raised for Idol Gives Back? I really thought the ratings might get hurt this season but not having the elimination show as part of it (not to mention pre-taping most of the performances). They raised 70 Million last year. Based on the article referenced below the ratings for the show were 17 million (vs the normal 27 they get) and they only raised 60 Million dollars (40 million short of their goal) Pretty embarassing stuff wouldn't you say? Sure 60 Million is nothing to bat an eyelash at but still for an Egotistical Show that is always about BIGGER and BETTER every year, this is a big sign of the eventual decline of IDOL. The article goes into also how the ratings have been down ever since Sanjaya got voted off lol Crazy stuff. Maybe it won't be too noticed next season if I stop blogging! lol

I hate the boy too!! Who would download music from him anyway? He will turn out to be just like Taylor, Rueban, Jordin(sorry Mike.. hated her) David Cook, Brooke and Jason all could make cd's that are different and people would want to hear.

David Cook's performances have bored me ever since the admission of his little Itunes trick the week after he "borrowed" Billie Jean. The judges were overly kind to him last night thanks to his brother being in the audience. That was obvious when Randy Jackson whose favorite word is "pitchy" gave him a standing O but didn't comment on the numerous pitch problems. I'm sorry, but that is messed up. He wasn't even good last night and everyone ate it up and bought it on itunes because of his sick brother was in attendance.

I am another Archie hater speaking up! Have been from the very beginning! His voice is weird and he's just too much of a kid. I would never buy his stuff.

David Cook on the other hand would get my money. I have already bought several of his songs on iTunes. I don't know that he would ever be as popular as Daughtry, but I think he could definitely put out a great rock album.

Laura, no offense taken on Jordin, It was slim picking last year. And I pretty much supported her because I thought she would win over Melinda, whom I could never really get into lol

Glad to hear all the Archie haters speaking up and that I'm not alone.

Which brings me to the very brave poster who remained anonymous (very brave indeed lol) Hey, we're all entitled to our own opinion but I'm sorry. I don't think the judges would go out of their way to be especially nice to Cook because his sick brother was in the audience. That show rakes in Millions and ratings are a key to the game. Right now, the producers pretty much know that a David/David finale would probably bring in their most ratings. So, based on your argument I could pretty much say that they're doing the same thing with boring monotonous David Archapuke-a. In no way does he deserve the praise he's getting for hauling out large dishes of syrupy similarity every week. And one that struggles in his lower register ever week and struggles to talk to Ryan every week. But why do they praise him? Listen to all the screaming kids in the audience. The producers smell money and lots of it. They smell Miley Cyrus part II.

Was David's take on "Always Be My Baby" the best Idol performance ever? Far from it. Was him admitting that he looks for obscure versions of songs on iTunes a reason to hate him? I don't think so. I think it's just good strategy. He's doing his research and finding what suits his voice.

Sure, he's become predictable in the style that he will sing every week (although I thought this past week's was a little less EMO/Grunge Rocker than usual....more Edwin McCain'ish). But then again, look out the remaining 6 contestants. They all have their typecasting going for them.

But I still like them (minus Brooke's talking to the judges)

Syesha - Picking songs too big for her
Carly - High expectations for every song she sings, but always fall short.


So, why did I download Cook's single? Because the judges told me to? Because I knew his brother was in the audience? (sorry, they really didn't make that clear so no I didn't know). No, because I enjoyed the version of the tune.

I agree with Andrea though. Not sure if he'll meet up to Daughtry's success, but as this season 7 has gone on, he's been the only one that I could consistently root for, even in his bad week (last week).

Thanks anonymous for your post, but I couldn't more whole-heartedly disagree!

Wow this is fun!!
Well said Mike! I agree with you. I didn't think of the whole Miley Cyrus thing with David A. He is just so annoying. Like Shanna said...just weird.

UGH! I had a whole response typed and lost it! I'll try again though.

I agree too. I didn't like Cook when the competition began. I thought he came off as smug and arrogant. I have warmed up to him though. Maybe he just wasn't ready for all the attention and praise, I dunno. I have come to enjoy and appreciate his performances. I certainly don't think he's the best Idol has ever seen, but I don't think we will ever get back to the glory days of this show...Season 4 was the last year of that for me. Anyway, just my two cents.

Laura, I talked to a woman on the phone this week that sounded EXACTLY like you! It was a little scary how much so. Lol