American Idol: Well that about proves it...

Everything I touch turns to safety! I guess that means I will be picking David Cook from now on to get eliminated from the show! I can't even say this one was a shocker. In fact, I knew once I didn't pick her that I would regret it. Why? Because of the rationale that I used when choosing my elimination pick: "Whose cheery persona is wearing on me?" I think it was wearing on everyone! For me, at the audition I didn't like her then she won me over with her artistry and then she just wore me out with her crying and apologizing and talking back to the judges every week! Not to mention 2 Stop/Starts and a 3rd attempt tonight! Ladies and Gentlemen....the Nanny is going back to her kids! 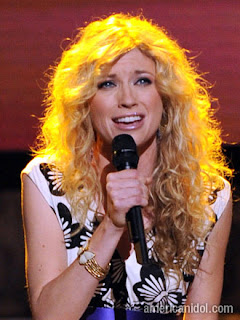 Not to mention dialidol.com had Syesha ranked #1 this week to further disprove any accuracy on their part! So Dreads made it through to the final 4. So do we think Syesha is on deck again for elimination for being in the bottom yet again? I guess it depends on the theme next week. I still think it would be hysterical if ol' Archie made a shocking exit next week or something. In the past there have been surprise eliminations in the final 4. And if that surprise is David Cook after jinxing himself with the "Kiss of Death" well...there's really no need for me to watch the last 2 weeks of the season because I'd already know it would be a disaster! Something tells me that the Davids will power through next week though which makes it a battle to stay alive between Syesha and Castro. It's really either of theirs to lose. Maybe some more sympathy votes went Castro's way after Paula time traveled and told him how he was going to be awful in his 2nd performance. Maybe people felt that he got a raw deal handed to him and that's why his vote count went up. Speaking of Paula...so they did attempt to address it tonight. But how much more vague could they have been? "THE RUMORS!!!????? THE RUUUUUUMORS???? NOT TRUE! Paula is part of the family here and we love her!" Okay Ryan, I don't quite thing I cracked the code there! Were we just supposed to move past this after seeing Paula get all teary eyed and for you all locking her in a room with no booze or meds so that she would seem sober on the show tonight? Not to mention 3 Idol Q&A questions geared towards Paula. awwwwwww Gotta love Idol Damage control! A show that can do no wrong! Okay well while we're recapping the show here's the other things to note:

Obviously my Elimination picking is way past comical. So I think I pretty much am giving up for the season (that might work to my advantage!) But I am still pursuing the David Cook victory over the mighty Archaawful! That's the only contest I'm concerned about! And with that, I bid you all adieu for the week. See you for the final 4 next Tuesday!

Brooke's cheery persona never wore on me. She was the last contestant I liked. I don't see myself ever buying the albums of any of the remaining contestants, so I don't care who wins anymore.

Paula did travel into the future last night She woke up in a winter park in Tunisia looking for Jason Castro and is attacked by a smoke monster then somehow her mind reverted back in time to a point prior to Jason's second song even though she previously heard it.

Ditto on Ian's comment. Wouldn't buy or download ANYTHING from those who are left, so stick a fork in me, my friend- I'm done!

I'm not really sad to see Brooke go. She was really starting to bug me (and I was a fan of hers for a long time). And, how fitting was it for her to mess up her final song by starting and stopping a few times. Now, if only Artichoke would just go away!!!

Yeah, I was really surprised to hear today how many people were upset to see Brooke go. I guess it was all of the crying (even though she did that EVERY week lol) I mean, I was a fan too but I thought she made a good run on the show for all the mistakes she had made. And I thought it was very fitting that she messed up again.

Like I've always said, she's a great talent and I think she'll have a decent career coming out of this, but she was never going to be the Idol winner.