American Idol - Kelly Clarkson Clone she is Not!

So who got voted off American Idol during top 11 week is what you might call a shocker. Well, that is unless you didn't look at http://www.dialidol.com/ right after you made your blog picks! I tell you, sometimes that site is dead on with their statistical measuring and sometimes it is waaaaay off! Anyway, the producers are either breathing a sigh of relief or may have had something to do about this depending how you want to look at it. Because one of the leaked "pre-destined final 4" has left the building! 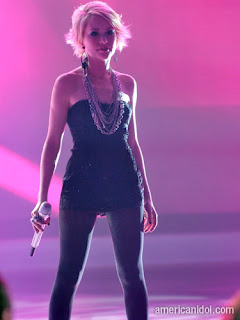 Well, if this is any indication for how this American Idol season is going to go, we're in for quite a ride. Because America is all over the place with who they like! But for now, I am happy to see Alexis go. I was irritated when she was compared to Kelly Clarkson so early in the competition. I'm guessing Alexis will not be topping the charts with her 2nd Number 1 album like Kelly did last week any time soon! Anyway, Alexis was still a decent singer. She just was not able to take advantage of the opportunities she was given. Farewell, Alexis! We wish you luck.

I think I have had enough conspiracy theories about the American Idol "Producer Fix" for the week, so I will let it go. The bottom line is, the gossip from earlier this week is no longer relevant. This show seems to draw so much controversy, but in the end can steer it right away!

So our top 10 is pretty solid moving into next week. You're going to have to wait one extra day to get your American Idol fix though as our fearless leader is once again taking over Tuesday. I am sorry. But this is getting out of control. Yes, I am a little biased because it makes my Wednesday nights absolutely dreadful with LOST and IDOL recapping madness! But come on! If people are depressed about the economy, the last thing they want is for the President to take away their Escapist Prime Time television! But, I will say no more on the topic! Just be ready for a less wordy recap next week as always! (That could be a relief for all of us actually!)

But there was tons more to do during the results show episode than just ponder who got voted off of American Idol! We actually had some quality performances tonight (and of course, one laughable one as always). Here are the Highlights and Low-Lights of the night!

Well, that's all I got kids. So I'm 1 for 3 with my Top 13 picks this season. But no fear, I'm still in the hunt for the winner! Hope you enjoyed my ramblings and I'll see you next Wednesday for the American Idol Top 10!

I'm not shocked at all by this result. I predicted on my blog that Alexis would get the fewest votes. Hers was the least memorable performance on Tuesday, and I just had this feeling.

Next week is Motown. Let's hope they don't recycle too many standards from the early seasons.

I didn't have any complaints about Alexis until last night. She was a decent singer and cute, but her attitude was horrible last night. From the second Ryan told her and Adam to stand up she looked very p*ssed off and it didn't stop! If she was going to start acting like that every week, she needed to go! I hope Megan WhatEverHerLastNameIs goes home next. Other than her (and Lil!) I think we have a pretty good top 10 this year.

Agreed on all points Andrea! Unfortunately, this year LIL will probably remain as a top contender for awhile. But for now, it remains the year of Gokey and Lambert. (And I still like Matt!)

Ian, good job on calling Alexis. I think I let my "the show is fixed and she's a pre-destined final 4'er" cloud my judgement into even putting her in the bottom 3. Because, she definitely deserved to be there! lol

Oh yay....Motown! They haven't done that theme to death yet! Can't wait to see what Idol they bring back to fall into the theme! (not that Kelly Clarkson has anything to do with Michael Jackson or anything lol)