Hello American Idol enthusiasts!  Welcome to another round of eliminations.  This time the stakes are higher as we have reached the top 12 finals.   Who can make it to that elite Top 10 to join the summer tour?   I am pleased to say that I am on quite a roll this season as I have accurately predicted yet another ousted contestant.  And 2 of the bottom 3 as well.  Almost a perfect score.  We will aim for perfection next week and beyond.  For now let's bid adieu to the fallen Idol. 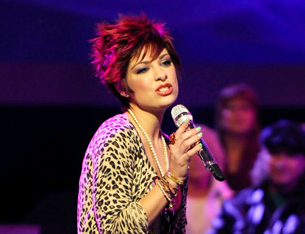 I personally thought she had overstayed her welcome.  And while her performance wasn't terrible Tuesday night, she was the only one that I forgot during my process of elimination ramblings in the blog.  Sometimes a good sign that someone is heading home.  I'm happy to see that I was incorrect in America's feelings for Didi Benami.  I think she is quite talented, and hopefully she'll get a chance to grow.  And while I'm not Tim's biggest supporter either, I'm glad fans jumped to his aid when he seemed unfairly judged this week.    I will express my thoughts on keeping the dreaded "JUDGES SAVE" device alive and well this season in the Lowlights below.

Let's do our weekly Highs and Lows of the Super Bloated Results show!

Lowlights
Anyway, that's about it kids.  I didn't catch a theme for next week so I guess we will be surprised.  Who will go home?  Tune in next week as I try to accurately make the call again!  Hope you enjoyed my ramblings and I'll see you next week!
Ending Credits
Please Click to Support!
Check out my other Blogs:
LOST - http://www.lostaddictsblog.com/ (blog is back and on fire!)
FlashForward - http://www.flashforwardaddicts.com/ (back March 18th)
Posted by Mike V. at 10:24 PM

Right now, I believe Siobhan is in the driver’s seat: she’s still playing against expectation, she’s playing the most with arrangements, and she’s done a wide range of different songs each week. By comparison, Crystal has been more consistent but has effectively done the same thing every week, and it’s yet to be seen how less rock-driven theme weeks will fit into her aesthetic. But if you would ask me how everyone else is going to fit into those theme weeks, I’ll be honest with you in saying that I just can’t motivate myself to care.

And by the lack of comments by any others around here, I see that I may be in the majority on that.

Nice phil lol definitely the majority of the commenters supporting Siobhan! I definitely can see Crystal getting tiresome after awhile.... Siobhan definitely has a good shot at taking this thing to the end. As much as I want to dislike her she does have a great voice. I'm sure she's going to have performances that will blow me away and then some like this past one that I just thought were a little too bizarre. We'll see what happens! Thanks for commenting!