Hello American Idol fans!  Welcome to the recap of the super bloated Idol Gives Back / Top 7 Results show.   We were live at the Idol Studio and also from the Pasadena Civic Auditorium hosted by Queen Latifah.  For 2 hours and almost an extra half hour we were learning about how much our money can help children in our country and all over the world.  Very touching stuff.   But we still had the sad moment of getting rid of one of our Top 7 contestants.   And, I must say, it is fitting that the kid who always smiles ends up being the one who we say goodbye to tonight.  Ladies and gentlemen let's bid adieu to our fallen idol contestant. 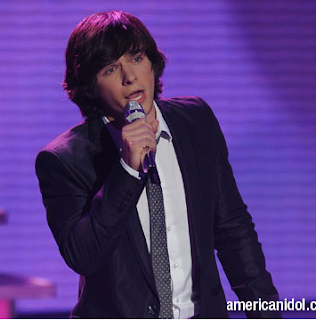 It was bound to happen right?  I just picked the wrong week!   I kept thinking Tim would keep passing through from round to round.  He definitely stayed longer than we all expected, so he should be credited with at least that!  Aaron and Casey live to fight another day.  But, now that we're in the home stretch, it'll be interesting to see who gets booted first.  And with the theme next week, I'm predicting another guy!  Even though I'd be perfectly content singing one of the songs! (don't worry, I'm married to a woman)  But we'll get to that at the end.  Let's talk about Idol Gives Back for a bit.

Overall, the show was decent.  I think I enjoyed previous Idol Gives Back when the music performed was more inspirational based than promoting current singles and what not.  You'll see in my live-blogged highlights and lowlights below my complaints.  Of course, there were a few exceptions.   Here we go:


Highlights of Idol Gives Back
Lowlights of the Night
So the theme for next week is the music of Shania Twain!   Not only was she the best additional judge this year (I include Ellen in this, even though I like Ellen, just not a fan of her as a judge) but she has some fantastic music to choose from!  Having 6 amateurs sing her songs on American Idol might bring a whole new meaning to "Shania Karaoke" that Carrie mentions in her hit "Before He Cheats" but it should be a good time.   Can you imagine Aaron singing "Who's Bed Have Your Boots Been Under?"   Or Casey singing "Man, I feel like a Woman!?"    Ahh we're gonna have fun with this kids!   Can't wait for next week now!
And, that's all I have for tonight!  Finally, next week there will only be 2 hours of American Idol all week.  "Music" to my ears!  Hope you enjoyed my ramblings and I'll see you next week!
Ending Credits
Please Click to Support!
Check out my other Blogs:
LOST - http://www.lostaddictsblog.com/
FlashForward - http://www.flashforwardaddicts.com/
Posted by Mike V. at 10:41 PM

You liked Wanda Sykes? Man, I can't stand that woman. Truthfully, I thought most of the comedy bits on tonight's show stunk, though I'll admit to chuckling a few times at George Lopez' bit too.

I don't normally think she's funny. Last night I guess I was just in a more charitable mood lol you hate to bust on a show when they're trying to do something good for
the world. I still found a way though! Lol