Well, American Idol fans, you know I'm not very thrilled right now.  America has chosen incorrectly.  And I may owe Adam Lambert an apology, because they may have chosen incorrectly 2 years straight (no pun intended with that last word).  And hey, I liked Kris Allen too and was happy he won.  But now, looking back it is clear what is happening to the show.   It has utterly become a popularity contest.  It is the only way I can explain what has happened and what is happening.  There are many more Text Messagers out there than there were 8 years ago and there are many teenagers with cell phones.  I think it could be skewing the vote a bit.   Don't get me wrong,  I like the person who won as a person and I am happy that he can make his dreams come true, but I cannot possibly agree with the results based on the 2 contestants standing.  If you had asked me last week yes, I may have been fine with it.  But when a contestant doesn't even show up to the finale, and we still vote him in, what does that say about the voting public?  We don't care about the performances?  We don't care if they're just going through the motions?   Whatever, maybe I'm just getting tired of the show.  It has been 9 seasons after all.   Ladies and Gentlemen meet your 9th American Idol! 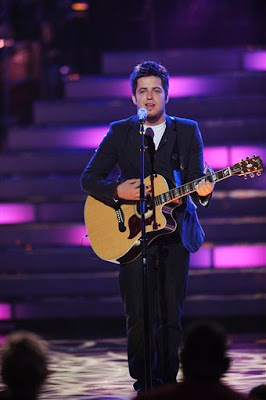 Good thing I wrote the highs and lows before I got the results.  Because I'm not sure what else I can stomach to say!   It was a very fitting conclusion to a very bad year of American Idol.  (Okay, I found something to say)  I am left uninspired to continue writing about this show in future seasons.  That takes a lot too, I survived FANTASIA and wanted to write more!  We are all left with a radio single of a song that was already an overplayed hit by the biggest Rock Band in the world.  (U2's "Beautiful Day")  But, hey, that's how it works.  Crystal wasn't everyone's favorite person, and not everyone's favorite musical style.  She may have had the goods, but that's not who America wanted representing them as their Idol.   That's fine, I guess.  I think this season was messed up long before we got to this finale, so I shouldn't be too upset!

The finale overall was a decent night.  I get into more in my LIVE BLOGGED Highs and Lows.  All of the Simon send-off stuff was pretty good.  I do not think it was overdone at all.  He will be sorely missed from this show.  I am not sure what they'll do without him!  Stunt casting with Sir Elton John?   I've heard rumors.  I may be inclined to check that out, but not sure if I'd be inclined to stick around!

Well, that's enough of me blabbing on and on, let's get into the fun part of the recap!  My LIVE BLOGGED thoughts as we went through it!  Here are the highs and lows.

Highlights
Lowlights
And there you have it.  One more year down in the never ending search for a superstar.  We have months to forget this show exists only to be pulled back in in January.  The only thing is, I'm leaning very much towards not returning.  At least not 100%.  It's been fun recapping the show for the past 7 or 8 seasons, but I think I have lost my interest in it!  I think the show is slowly deteriorating each year from the show that it used to be.  New Producers, new judges, new rules.  I'm interested to see what Simon is going to do with X Factor in the fall of 2010.  Like I said, if he pulls Paula into it, I may be intrigued to take up blogging that.  But we'll see how it goes!  I may check in on Idol from time to time but I can't promise to be your full time guide through the seasons.   I thank everyone who has stuck with me on these journeys and I hope you have enjoyed my endless rants whether they were positive or negative and enjoyed them for what they were!  Pure Entertainment!

I will continue to write about something, but I just don't know what yet.  My slate has been wiped clean! So keep in touch.  I'll be back!   Thanks for reading.  Hope you enjoyed my ramblings as always and I'll see you around!

Ending Credits
Please Click to Support!
Check out my other Blogs:
LOST - http://www.lostaddictsblog.com/  (the show is over, but we're not done yet!)
FlashForward - http://www.flashforwardaddicts.com/ (one more episode!)
Posted by Mike V. at 10:28 PM

Seriously man, if you don't enjoy doing these recaps anymore, don't do them. I'm quitting too after only recapping for three seasons. If you want to step down now, by all means, go for it. You have the support of at least one of your readers.

I'm disappointed that Lee won too. I mean, I'm glad he's representin' the Chicago area, but Crystal's clearly more talented than him. Oh well. We'll see whose career does better. I wish them both the best of luck.

I thought the same thing about Bret Michaels possibly collapsing on stage. Glad to see he didn't! I was already a Poison fan, but I gained a lot of respect for Bret after seeing him on Celebrity Apprentice.

I actually liked the fact that they got Alice Cooper. He's way cooler than a lot of the guests they did get.

Thanks for your support Ian! I was just trying to let people down easy and explain my reasoning. A big reason that I have kept going is how successful these write-ups have been on Gather.com. So, at least I wasn't doing them for FREE! lol But 42 recaps a season just ties up a lot of my nights! And if this is the product we're going to get, it just doesn't seem worth it to me! Nice to hear you're quitting too.

I wonder how many people will "quit" the show next year. That's almost the only reason I WANT to tune in. To watch the trainwreck continue and see how bad it GOES get!

As for Kris, yeah...I was speaking in the moment and out of frustration. I really thought Kris was a LOT better than Lee. His growth through the show was very impressive and his "MOMENT" with Kanye's "heartless" I can still hear in my head. He deserved to win. And he's still doing fairly well for himself.

Oh well, in the end, it's just a TV show I guess lol

Mike -- I get what you are saying, but of course Idol is a popularity contest! The whole "music industry" is. It and this show are reflections of each other. Think about some of the most popular artists on the music charts these days. How many of them would you classify among the most talented artists out there? Few, if any, qualify in my opinion. (Think of some of the recording "stars" they've had on this show even -- many times the contestants sound way better!) But it is the most popular artists that sell records, and it is the public, the voting public of this show, that buys them and makes them popular. Crystal may have more natural talent, but Lee has the more mass appeal. Hence the result.

That being said, my vote was for Lee. Despite the weak performance on the finale, up to that point his performances were good, and his musical style more to my taste.

Curious if you listened to any of the studio recordings of the songs Lee and Crystal did on the show on iTunes. In my opinion, Lee far outshines Crystal on the recordings.

@Jase - everything you're saying makes sense. But that doesn't change my opinion that this year more than others just doesn't sit right with me. I have usually been on board with who won the thing. This year just seems lopsided. And it comes down to this final week of the show. Everyone that has won the show before...at least seemed to be giving an effort in the final week, from what I recall. Lee pretty much just coasted through it. Now, I will agree that Crystal had a few rough patches the weeks before and it gave Lee his moment to shine, but she came into this week and gave 110% to those final performances. I understand how America Works...I understand how the music industry works. But I also see what is happening to American Idol. 3 years in a row, 3 guys that teenage girls could consider cute or "hot" have won. In season 1, Kelly Clarkson beat Justin Guarini. A great singer vs. an OKAY singer but with good looks. Difference? No text message voting that year. You had to be a little more crafty with computerized AUTO-DIALERS to get in mass votes for your favorite contestant. Now in now way am I comparing Kelly Clarkson to Crystal. In my opinion...Kelly had a "MOMENT" every week that she performed.

I think what it boils down to is that I'm just tired of the show. I thought this year's talent was mediocre and the production value of the show dropped so much. Lee winning in the end was just the icing on the cake for me. I just had no interest in the season. It didn't help that the performance night landed on the same night as LOST. My priorities shifted big time.

So no, I have not listened to any of the recordings and really don't care to! I'm sure Lee sounds great on them. But that's not what people are voting on. They're voting on the live performances. Like I said, I liked Lee and last week I was rooting for him to win it all. I just didn't like how it all ended up this week. I know Idol is a journey and the last week shouldn't count. But when you don't see the HUNGER there to win, it doesn't sit right with me.

Thanks for sharing your thoughts!

Great post, I like this post.
I 've added your blog to My Blog Roll at
http://auditions-auditions.blogspot.com
So would you put my blog too, on you...

you can get healthy traffic from us and our visitors can get relative and useful information form your site.

Hope you would add my blog.
Thanks a lot.Keep blogging....