Hello American Idol fanatics!  They tried to scare us a little bit tonight, didn't they?  Yeah, I'm on quite a cold streak with my picks but I think I've been in the right ball park.  As the results were provided in no order tonight, I think the final 2 standing were there for dramatic effect.  And, it got my heart racing for a second.  The one who ended up going home has been voted off already, and he survived an amazing 5 more weeks.  Impressive.  Ladies and Gentlemen, join me in bidding the contestant with the big heart (and the biggest build) adieu: 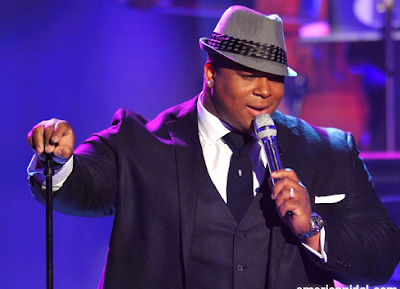 I will miss the guy as he was just a fun person to have on the show.  But, it was time for him to say goodbye.  Great, powerful voice but there was just something missing on a week to week basis.  There wasn't much of a wow-factor around him.  Of course, this season, we could say that about all of the remaining contestants.  I put Crystal Bowersox in the exception to that rule (disregarding the last 2 weeks of course).   She still seems to be the favorite, with Lee the rising underdog late in the game.  If people don't like Crystal, they're starting to pitch their support behind the lovable rocker.  Should be interesting to see how it goes down.  Yeah, Casey is surviving as well and his freakishly good looks are still a threat to knock someone out of that FINAL 2 at the Kodak Theater.

But we have a week to ponder all of that (not that we really will until next Tuesday and Wednesday!).   The remaining 3 will return to their homes for a big bash with thousands upon thousands of their closest friends.  Always makes for a good results show.  For now, let's get into the highs and lows from tonight's result's show.

Lowlights
And that's about all I have for tonight!  Next week will probably be a 3 song night for each of our contestants.  The contestants will pick one, the judges will pick one and maybe Clive Davis or someone will pick one.  I don't quite trust this show to stick within an hour with 9 musical performances though, so we'll see!
Hope you enjoyed my ramblings as always and I'll see you next week!
Ending Credits
Please Click to Support!
Check out my other Blogs:
LOST - http://www.lostaddictsblog.com/
FlashForward - http://www.flashforwardaddicts.com/
Posted by Mike V. at 10:09 PM

Daughtry was probably ripping off Dokken and Winger too.

Congrats to the Flyers! I hate Boston and their obnoxious fans, so I'm rooting extra hard for the Flyers in Game 7.

Thanks for the congrats! I caught the end of last night's game (I don't know what happened, I used to watch every single minute of every single flyers game. I blame the NHL strike and my picking up of TV Blogging since then! lol) Good times! Can't believe they came back from a 3-0 deficit. Definitely will be tuning in Friday!