American Idol: And Then There Were Two

33.68% 33.26% 33.06% Those are how the results came in. I guess the producers don't really have any reason to LIE to us (well except to increase ratings for the finale). But REALLY? Are we to believe that the race is THAT close? Maybe it is. I'll be the first to admit, I didn't watch all of tonight's 1 hour show (watched first 20 and last 7 minutes), so I didn't get to see Kat and Elliott perform their ditties. Although, I DID get to see Elliott dancing his cares away during Taylor's performance of "Taking it To the Streets" good times...good times! But I have a hard time believing at this juncture that anyone is going to stand in Taylor's way of being crowned Idol this year. And with that, let's take away one of the people standing in his way. 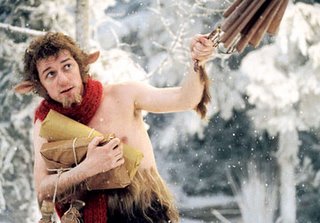 It was ashame to see him go, but we all knew it was his time. There's really not much else to say! FAREWELL TUMNUS! We'll Miss you! See you next week at the finale! (ZING!)

And for those of you that DID endure that hour long trainride of obvious suspense, you got to see a presentation Clive Davis for 33 Million American Idol related sales. Actually, it's a pretty impressive number (and we can thank Kelly Clarkson for 10 Million of them!!!)

So the showdown is set. McPhever vs Soul Patrol. I have a feeling both will do well next week, but I think my mind is already set on who will be the winner. If only for the fact that AI is so desperate for a GUY to win this show. And if you're going to remember anything from Season 5 of American Idol, it's going to be that crazy 40 Year old Man that was allowed to compete! Taylor IS Season 5. But I've loved the two of these contestants from the very beginning. My votes helped get them here....so I won't count Miss McPhee out. Maybe she will be able to sell-out to the IDOL SONG CHEESE that we'll have to painfully suffer through. Maybe Taylor will be too proud to even attempt to sing the crap justly.

Bigger questions. Who will we see next Wednesday? Will ALL of the previous Idol Champs return? We know Kelly won't be there since she no longer associates with the show. Will we get to see R.J. Helton perform us a little ditty? Oh man...I know I've been waiting for that! I heard Kellie Pickler's Dad is out of prison and will be at the finale. Awwww what a message to send to the kiddies out there!

Lots of questions....all will be answered....NEXT WEEK Stay tuned for the final 2 blogs of the season. (and like i said last night.....BE PATIENT!)