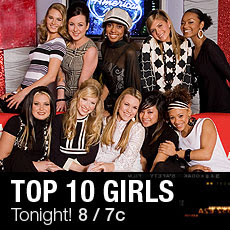 I think the one thing that everyone will be asking after tonight's episode is.....WHAT WAS AMANDA OVERMEYER THINKING WITH THAT HAIR????? It looked like she ate a skunk and got struck by lightning! And to think that was only the beginning of her problems! Well, I think we're beginning to see a trend with these girls. They're not quite matching up to their male counterparts. They all have lots and lots and lots of potential, but are just failing in the Song Choice category, (with few exceptions of course). I'm at a loss after tonight at who will be going home and who our eventual Top 6 Females will be....but in the end...I think we have to look at the popularity of each contestant and who could afford one slight misstep. And with that little preface, we can begin our dissection!

We have one difficult task ahead of us kids! Here's how I see things going down:

Definitely Safe and in the top 12: Brooke White, Carly Smithson

Hanging in there: Alaina Whitaker

Off-week but safe based on perception: Ramiele Lullaby

Wildcard Pick: All other bad performances

Yeah, I know...easy way out there. But this can really go any way! But, if I don't get the elimination picks correct, I understand I deserve no credit! So that's it, yet again the girls for the most part underwhelm. I'm looking forward to getting back to 2 nights a week Idol. Soon enough! Due to the LOST/IDOL joint night tomorrow...you can expect an abbreviated Idol Results show blog. But there's not really much to analyze at this point so I think we'll be okay. Hope you enjoyed my ramblings as always and see you tomorrow night after the results!

...please where can I buy a unicorn?

My guess is the unicorn store