Welcome to the Season 7 Top 24 Semi-Finals America! We visited with the top 12 guys Tuesday night to get to know them a little better. I got a late start watching this one, so I'll be brief. Overall, no one really blew me away just yet. There were a few solid performances and a few shoe-ins to get the boot Thursday night, depending on sympathy votes. So with us getting to know our 12 guys, I thought I'd give a little slogan to sum up my 1st impressions on each of them and then of course...after the analysis...I'll make my picks for who is going home! Let's dive in. 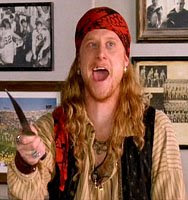 I know I didn't really get into the whole judges and Ryan bantering that occurred throughout the episode. But obviously, I was a big fan of Paula calling out Colors and Simon being utterly confused and Ryan trying to tie everything together and make sense out of it. Anyway, we have some work to do now. Let's do some math as we always like to do!

Best performances of the night and not in danger: Michael Johns, Dreads, David Cook

Many people will also put him in the "best performance" category: David Archulleta

I'm going to try and pretend that when I realized I only had 11 names up there, that David Cook was NOT the name I was forgetting! It's not a sign that America will forget about him too! I've usually gone pretty bold with some guesses in this 1st Semi-Final round...but I'm going to stay safe this week. This seems pretty straight-forward to me:

I actually agree with you Mike!! The only performances I didn't fast forward halfway through were the same you liked... but I liked Robbie and the 17 year old. This is the first time I have tuned in because I didn't want to watch auditions.. Nice job Mike!