Worst Ever American Idol finalist gets her "Lights Turned Down", who got the boot this week?

That's right my friends. I've gone and said it. No one thought we would ever have another who would do the unthinkable like Sanjaya Malakar did. The major difference between our ousted contestant from American Idol, and the former WORST top 12 contestant ever? At least Sanjaya was voted into that top 12 by America! This was purely a disaster brought to us by the producers and judges. And finally, predicted by yours truly, the right person is who lost on American Idol tonight. Ladies and Gentlemen, say your goodbyes to the BIRD CALLER! "CAW CAW!!!!!!" 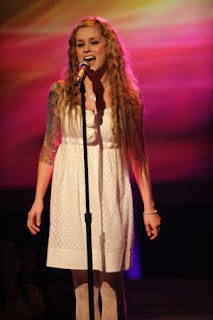 Finally, a wrong has been righted. I loved how Simon did not even honor her with the ability to be saved. Makes sense, since she told him she didn't care what he has to say. How obnoxious was she the whole night? It was kind of ridiculous. And because of that, I'm not going to honor her with many words! Farewell Megan, enjoy time with your kid and looking back on wasting this great opportunity you had!

Let's get to the highlights and lowlights of the show tonight.

Anything else I could come up with for tonight's show would be forcing it. So with that I am done. Next week songs will range from 1980 (Danny) to 1992 (Allison) as we hear songs from the year the contestants were born. They've done this theme before to mixed results. We'll see next week how well they do. Hope you enjoyed my ramblings and I'll see you next week!

I'm glad to see I'm not the only one who sort of liked the Ford commercial this week.

I think calling Megan the worst finalist ever is fair. I think Sanjaya, in retrospect, wasn't as bad as we all thought he was. Granted, he had some horrible performances, but some of them were better than he probably got credit for. Besides, unlike Megan, he actually had some singing ability.

I'm just glad Megan's finally gone. She seemed like she was looking for ways to get on people's nerves this week.